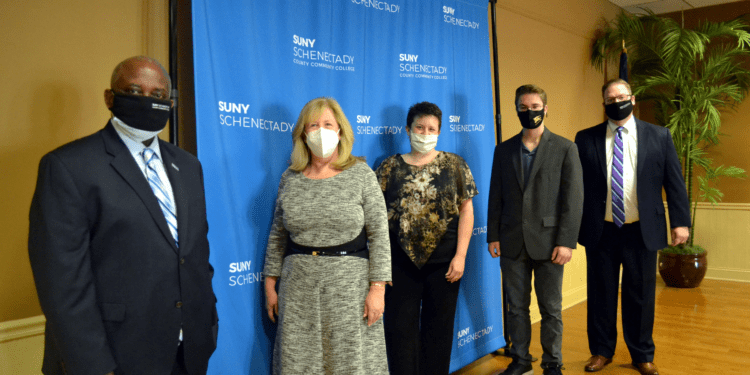 SCHENECTADY — All AP students know the frustration of devoting hours to a class expected to give you a leg up in college, only to find out the credits you literally poured blood, sweat and tears into aren’t going to transfer.

The college journey can be tough. Not only are freshmen thrown into a vortex of experiences they weren’t privy to in high school, but the process is intense. How do you graduate in the four years that’s expected? How do these credits equal a degree? Why didn’t anyone mention if I took this elective, it would push graduation off by three lousy credits?

Brown School and SUNY Schenectady are trying to mitigate some of college’s most infamous gripes. The K-12 independent institution, known for its hands-on approach to education and its ability to gear its curriculum to each student, is teaming up with Schenectady’s most famous community college to offer classes to its students. These classes, which will contribute to a student’s associate’s degree, are guaranteed to transfer to either SUNY Schenectady’s matriculations or other higher institutions.

The goal? Make college as affordable as possible for every student and allow some to walk across the stage with both a high school diploma and associate’s degree in their hands.

“The reason why this works so well is because we have the support structure to make sure these students are able to get the college experience while still being at Brown School,” Steady Moono, president of SUNY Schenectady, said. “Allowing students access to credits from SUNY Schenectady gives them a chance to explore specialized programs in a format that is at minimal or nominal cost to them.”

Moono said his staff prides itself in its 360-degree support system, which allows students, including those at Brown School, access to resources that will improve both their academic careers and lifestyles. Because college can be a stressful time, his staff takes pride in offering students a safe haven to work through life problems in the same capacity as they would a complicated math problem.

Two of Brown School’s students, juniors Owen Morley and Kabir Pabla, are excited at the prospects coming from the partnership between the schools.

“Compared to last year, I am able to focus more on my own studies and the things I want to learn more about,” Morley said. “In this program, I’ve focused more about how I can learn and grow as a student and become more independent.”

“It’s been a really nice ice breaker into what college will be like for me,” he said. “It gives me a chance to explore engineering and see if that’s potentially where I can end up or if I want to try a different career path.”

Teresa Burke, head of upper school at Brown, said the program is in line with Brown’s philosophy on learning. She said both Morley and Pabla have grown significantly as students since joining the program, and because it is open to any Brown student who wants to participate, it gives her students another option.

“All of the possibilities this partnership offers is groundbreaking for independent schools like ours,” Burke said. “It gives us something to hang our hats on and another service we can offer our students as we continue their academic journey.”

Burke added she’s excited to see students continue making schedules and eventually being able to spend most of their days on SUNY Schenectady’s campus.

“Our students have really hit the ground running with this,” Burke concluded, “and there have been bumps along the way, but this is a safe place for those bumps because we’re here to help them shoulder some of it.”