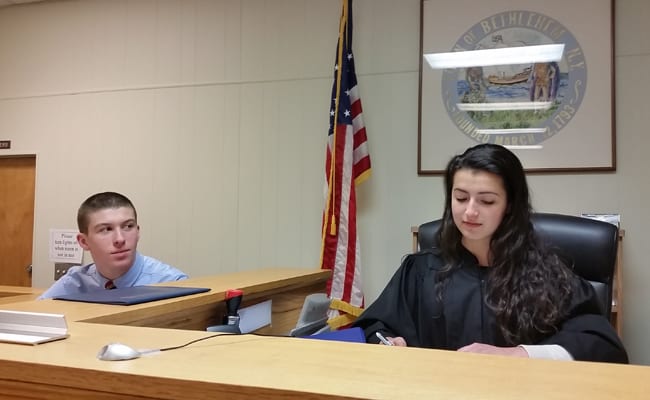 Although Bethlehem Youth Court has seen a decrease in cases the last few years, those who go through the program are presented with more charges.

Youth Court Executive Director Katrina Charland presented the program’s 2014 end-of-year report to the Town Board on Wednesday, Feb. 25. Although the number of cases dropped from 37 in 2013 to 25 last year, Charland said adolescents were being presented with more charges than before.

“We don’t really know why this is happening, but some hypothesize kids aren’t getting into as much trouble. So, the ones who do get in trouble commit more serious offenses,” said Charland in a later interview. “There’s also this newer trend toward not arresting juveniles and young people for very low offenses, so if they get to the point they are arrested, we’re seeing worse or multiple charges.”

The program helps to divert cases out of the town’s court system. Teens who are first-time offenders and have commuted low-level crimes can opt to go through Youth Court to be judged, tried and sentenced by a jury of their peers. Those found guilty are sentenced to hours of community service, based on the level of their crime.

“The charges all depend,” said Charland. “I know a couple of years ago, some kids were trespassing on school roofs. I don’t know why, but it was a big thing that kids were hanging out on the roofs of the school, and the district decided to crack down. Youth court was a great option because the students weren’t doing any damage or meant any harm, and the district wanted them to know this wasn’t acceptable behavior.”

Nearly 92 percent of the cases brought to the youth court made it successfully though the program. Those who don’t go back through the normal court process. The report also showed male offenders committed the majority of crimes at 76 percent.

In addition, 708.5 hours of community service were sentenced. Charland said the organization works to match kids’ community service work in some way to the offense they committed. Offenders can also be asked to write letters of apology and take educational classes.

Charland said a new training session for Youth Court is about to begin in this month for those who would like to volunteer. Training is extensive, with about 24 hours of class time on nights and weekends.

“I kind of jokingly say we teach them how to become lawyers in those six to eight weeks,” said Charland.

Volunteers get background on the criminal justice system and guidance from adult peers. They are then taught how to perform all the roles in the court, from judge and jury to defense and prosecution. The program is open to anyone in high school, although eighth-graders can volunteer for the jury.

Volunteers do not have to participate in a case if someone they know goes before the court.

“We would never have a student prosecute a friend or someone they may know,” said Charland. “Or if they in anyway feel uncomfortable with the situation and don’t want to be involved, they can recuse themselves.”