Having a wine time in Cohoes 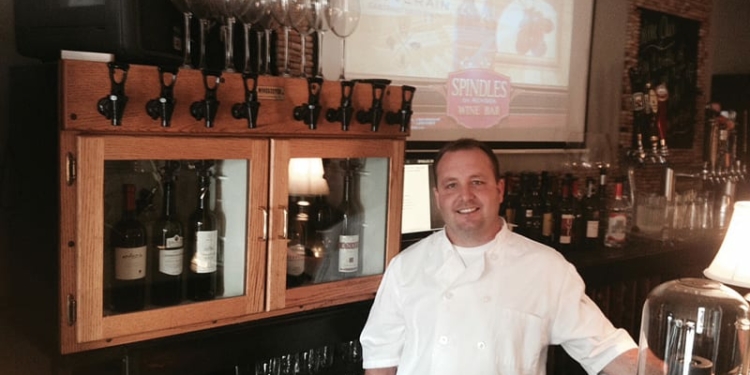 With an increased demand for food, arts and entertainment, the Spindle City has seen abandoned buildings find new life.

Local residents can add another spot to the lists of places to check out. After a summer of getting acclimated to the area, Spindles on Remsen held its grand opening Friday, Sept. 19, to formally introduce Cohoes residents to the only wine bar in town.

Owner and head chef Don Russell is not a newcomer to the restaurant business. He previously owned a successful business in Troy before moving to Cohoes. After some research, it was discovered there was something the immediate area was lacking.

“With talking with city officials here in Cohoes, they had done surveys of all the tenants at Harmony Lofts, Admirals Lofts. There’s tons of high-end housing in the area, and there just wasn’t anything like this around here,” said Russell.

While there are many good spots in the area for pub food or entrées, there wasn’t a place that offered such a large wine selection and the type of food Russell had in mind.

“Our menu is tapas style, so it’s all small plate stuff. It’s a great menu to come out and share with people. If you’re coming for dinner, the menu is designed so that you order two to three things. You still wind up spending the same as if you went out to a regular restaurant,” said Russell.

The menu has everything from bacon wrapped stuffed dates to filet mignon and seared duck, with the most expensive plate costing less than $13. Russell said the average ticket time is 10-12 minutes so you can order, eat, enjoy a glass of wine or craft beer and then order another plate. The idea is come in and stay a while.

“Most of our tables that come through the door in the evening wind up being here anywhere from two to three hours. It’s a very relaxing atmosphere. We’re not the typical restaurant saying, ‘OK, we gotta turn this table around and get you out of here.’ We want you to come, sit back, relax and enjoy,” said Russell.

After leaving Troy, Russell looked in Latham and Cohoes before making his final decision. He said the location in both areas was great and flourishing with new construction and businesses. He just needed something a little extra.

“You have that community feel. The community support here has been wonderful … This is definitely a very business friendly community. The outpouring of support from people that live here, whether it’s lifelong residents of Cohoes or its new residents from the lofts,” said Russell.

Due to the condition of the building, people wouldn’t buy it and others recommended tearing it down, but the city didn’t want to lose the historic character of it. Russell spent six months renovating the building, built in the 1860s, which had been abandoned for around five years. Russell said the previous owners were making renovations without permits and were making the building unsafe, so the city stopped them and they abandoned the building.

There are 44 seats inside the wine bar, plus a deck in the back. There are currently eight employees, but with business taking off, Russell said he expects to add three employees within the next 90 days. The menu will be updated at the beginning of October to reflect a change in seasons and the availability of fresh produce. The wine menu will increase by another 25 choices. The antique Gabler & Co. piano from the 1890’s gets worked out on Wednesdays and Saturdays when there is live jazz.

Continuing to dance the night away