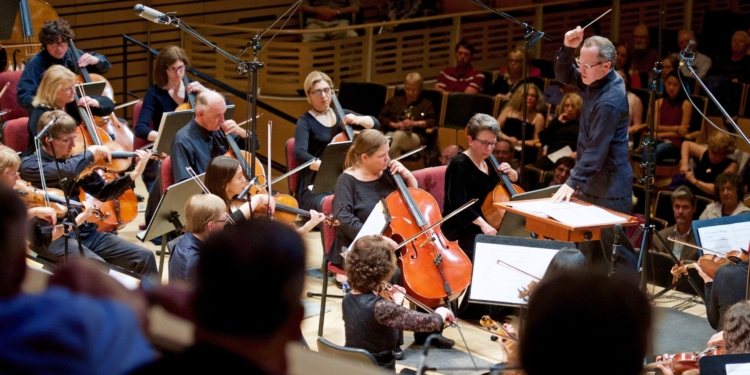 TROY — Due to illness, Albany Symphony Music Director David Alan Miller has had to withdraw from conducting this weekend’s Holiday Classics concerts at Troy Savings Bank Music Hall. Patrick Dupre Quigley will step in for Maestro Miller and lead the musicians of the Albany Symphony in the originally scheduled program.

“I’m so sorry to miss this weekend’s concerts, but am deeply grateful to my colleague, Patrick Dupre Quigley for agreeing to step in,” said Miller. “Patrick is an expert on music of the Baroque and Classical eras, and will no doubt bring great insight to the performances of these glorious works by Bach, Mozart and Perkinson.”

The Grammy-nominated Quigley is the founder and Artistic Director of Seraphic Fire, one of America’s premier instrumental and choral ensembles specializing in both early and contemporary music, and an in-demand guest conductor.

As a guest conductor, Quigley has collaborated with The Cleveland Orchestra; the Charlotte, Grand Rapids, Indianapolis, Kansas City, Mobile, New Jersey, New World, San Antonio, San Francisco, and Utah Symphonies; the Hamilton, Louisiana and Naples Philharmonics; as well as the Philharmonia Baroque Orchestra and Chicago’s Music of the Baroque. This season, Quigley returns to Music of the Baroque and the New World Symphony, and debuts with Opera Lafayette and Canada’s National Arts Center Orchestra.

Quigley deeply respects music traditions outside the Western European canon and has developed concerts and collaborations highlighting the music of the Babylonian Jews, New Orleans’s Black Gospel tradition, Latin Pop, and the Baroque music of North and South America.

Quigley founded Seraphic Fire in 2002 in Miami, FL. The ensemble’s recording catalog contains sixteen albums; two titles have received Grammy nominations. Seraphic Fire enjoys a residency at the Aspen Music Festival, where Quigley teaches and conducts. Over Patrick’s twenty-year tenure as artistic leader, Seraphic Fire has established the Seraphic Fire Youth Initiative and High School Masterclass, the Professional Choral Institute at the Aspen Music Festival, the Seraphic Fire Saturday Podcast (of which Quigley is host), and the ensemble’s annual Enlightenment Festival. Quigley’s writings and talks on music are inviting and concise, engaging concertgoers in conversations about music’s history and place in the world.

ABOUT THE ALBANY SYMPHONY

The Albany Symphony celebrates our living musical heritage through its adventurous programming, commissioning and recording of new work, and broad community engagement beyond the concert hall.

Recognized as one of the American’s most innovative and creative orchestras, the two-time Grammy Award-winning Albany Symphony is renowned for virtuosic performances featuring classic orchestral favorites, lesser-heard masterworks, and a diverse array of new music from leading and emerging voices of today. The Symphony has received more ASCAP Awards than any other orchestra in America, as well as several Grammy nominations, including the orchestra’s most recent win in 2021.

Led by Music Director David Alan Miller, the Symphony presents a core classical series throughout the region, each featuring a world-premiere or recent composition; a multi-day American Music Festival that celebrates established and emerging living composers; performances by its cutting-edge new music chamber ensemble, the Dogs of Desire; and a family series and holiday concerts in collaboration with youth performing arts groups. The Albany Symphony’s award-winning education programs include Symphony in Our Schools, which brings musicians into classrooms for interactive music education.

Founded in 1930 in New York’s Capital Region, the Albany Symphony serves a diverse regional audience covering more than seven counties and parts of three states. In addition to an eight-concert subscription season, an annual multi-day American Music Festival including performances by the orchestra’s genre-bending ensemble Dogs of Desire, and a host of education and community outreach events, the Albany Symphony regularly serves as an ambassador for new music and Upstate innovation beyond the Capital Region.