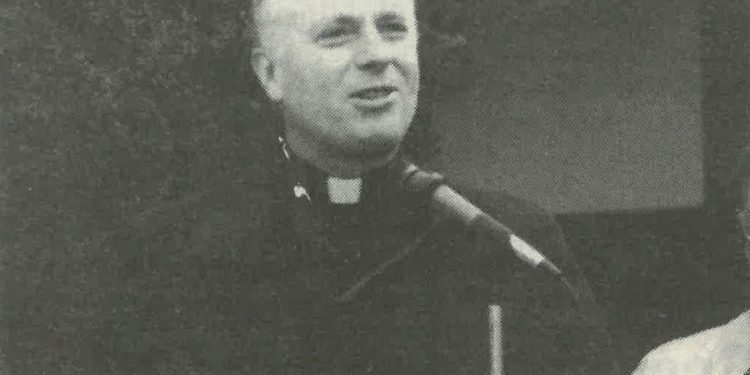 Bishop Howard Hubbard in 1979 in Delmar

Retired Bishop of Albany asks Rome to be relieved of obligations

ALBANY — In an unusual move, retired Albany Roman Catholic Diocese Bishop Howard Hubbard requested to be “returned to the lay state” by Pope Francis. Hubbard announced the move in a written statement released on Friday, Nov. 18.

Also within the statement Hubbard wrote that he has not served the Catholic community since 2019 because of an Albany Diocese policy that forbids priests accused of sexual abuse from public ministry.

“I had hoped that in my retirement I might be able to continue to serve our community as a priest. I am not able to do so, however, because of a church policy that prohibits any priest accused of sexual abuse from functioning publicly as a priest, even if the allegations are false, as they are in my case,” Hubbard wrote.

Bishop Edward Sharfenberger of the Albany Diocese had initially issued a statement supporting Hubbard’s request to be laicized. But when the Times Union quoted the retired bishop’s reasoning, the diocese released a second statement for clarification.

“We would like to correct a point in some reports that said there is a diocesan policy that forbids an accused bishop from sacramental ministry,” the statement read. “A diocesan bishop may regulate, that is, limit, circumscribe, or ban exercise within his diocese of any or all sacramental ministries. Bishop Edward Scharfenberger has done so in some cases, but in the case of Bishop Hubbard, it is he alone who voluntarily removed himself from any public celebration of sacraments.”

Hubbard, 84, is under scrutiny  for his handling of sexual abuse cases  during his tenure at the  diocese. He is also accused of abusing multiple children over many decades, and is being investigated under the Vatican policy Vos Estis Lux Mundi translated as “You Are the Light of the World.”  Vos Estis is a set of laws written and implemented by Pope Francis in 2019 to investigate bishops  who were involved in, or covered up, sexual abuse by the Church. Cardinal Timothy Dolan and the Archdiocese of New York are currently conducting the investigation into Hubbard’s actions.

Attorneys for one of the abuse cases involving Hubbard have subpoenaed 1,400 pages of the Vos Estis investigation from the Archdiocese of New York in Albany Supreme Court, as the Times Union has reported. A decision by State Supreme Court Justice L. Michael Mackey issued earlier today, ruled in favor of the plaintiffs and ordered the Archdiocese to turn over the records]. Mackey will review the documents to determine if the materials include any probative or admissible evidence that should be turned over to the attorneys.

That decision may have prompted Hubbard to request laicization from Pope Francis because it would avoid a potential trial and conviction under Canon Law (the law that governs the Catholic Church) that could lead to the same result, according to Anne Barrett Doyle, Co-Director of BishopAccountability.org, a organization that tracks the abuse crisis in the Roman Catholic Church.

“Often, laicizations that are supposedly ‘voluntary’ are in fact compelled by the cleric’s superiors. I suspect this was true in Hubbard’s case,” Doyle said.  “His laicization — which I bet will be granted speedily — will resolve a big PR problem for Cardinal Dolan and Pope Francis. Hubbard with his mountain of allegations has become a liability and embarrassment.”

According to bishopaccountability.org, Hubbard would only be the second Bishop in the U.S. to be laicized out of 138 Bishops it identifies as involved with sexual abuse or misconduct. Only seven have been granted leave or removed worldwide.

The only other American, Archbishop Theodore McCarrick, was found guilty in a church trial in 2019 and laicized. He would be charged criminally by a Massachusetts district attorney in 2021.

By requesting the action, it would be more of a favor from Rome to grant his request than a punishment if he were found guilty in a church trial.

James T. O’Reilly, a professor at University of Cincinnati and author of the book, “The Clergy Sex Abuse Crisis and The Legal Responses,” said the request itself and the final decision of Church will stay concealed. When asked when there will be a public notification as to the reason a person is laicized he responded “never.”

According to O’Reilly, once Hubbard’s request is granted the investigation under Vos Estis will, most likely, be dropped quietly.

The lawyers for victims see this as a turning point.

“We did not know it was coming, but it was not a surprise that he requested this,” attorney Cynthia LeFave said. “(Hubbard) should not be ministering in any way or to anyone. This is such a vindication to the hundreds of victims of this diocese.”

LaFave and attorney Taylor Stippel are handling many of the cases in Albany Diocese in partnership with Jeff Anderson, a Minnesota-based law firm .

“Today is the culmination of 440 survivors speaking the truth,” Stippel said in a written statement on Friday. “Had the survivors not courageously come forward, Hubbard’s heinous abuse and decades of deceit would not have been exposed. Hubbard may continue to deny the allegations against him, but his resignation speaks louder than his words.”

In another twist to the request by Hubbard is the reason used in the request. According to canon law, a cleric must give a reason why they wish to be relieved of their obligation.

The Vatican in its handbook on how to handle abuse cases gives those accused a way to step away.

157. From the time of the notitia de delicto, the accused has the right to present a petition to be dispensed from all the obligations connected with the clerical state, including celibacy, and, concurrently, from any religious vows.  The Ordinary or Hierarch must clearly inform him of this right.  Should the cleric decide to make use of this possibility, he must write a suitable petition, addressed to the Holy Father, introducing himself and briefly indicating the reasons for which he is seeking the dispensation.

From his statement on Friday Hubbard didn’t cite an exact reason, but did say what returning to the lay state could do for him.

“Recently, I asked the Vatican for relief from my obligations as a priest and permission to return to the lay state. In whatever time I have left on this Earth, I hope to be able to serve God and the people of our community as a lay person. I also will continue to vigorously defend myself against the allegations against me,” the statement read.

The actual reason Hubbard used in his request to be laicized was not about the sexual abuse claims, but rather he wishes to marry and is in a relationship with a woman many years younger than he. This was first reported in The Pillar and confirmed by Spotlight News.

Albany Diocese spokesperson Kathy Barrans said that a petition goes directly to the Holy See, specifically, the Congregation for the Doctrine of the Faith in Rome and that she cannot comment on its contents.

Barrans said that although the petition was sent directly to Rome and the Albany Diocese did not receive a confidential copy, Bishop Scharfenberger did receive a copy from the canonical advocate, Dr. J. Michael Ritty, JCD.

“The content of the petition is confidential, but it does make a request for dispensation from the rights and obligations of the priestly state, which would include the promise of celibacy, as is typical in such requests,” she said.

When asked for the reason listed in the petition, Behan said, “Out of respect for the Vatican’s process, Bishop Hubbard prefers not to comment further.”

This story was updated on Nov. 22 to add the decision on the 1,400 pages of documents.