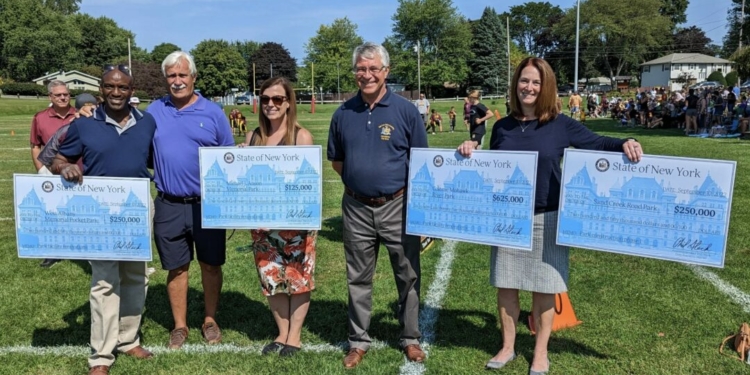 COLONIE — Town parks will be getting a $1.25 million infusion of cash for a variety of upgrades through a variety of state grants.

According to Assemblyman Phil Steck, the breakdown of funds include:

The park includes an Olympic size swimming pool, a splash pad, a boat launch and is home to the Latham Lassies softball program. Recently, the town removed the tennis courts with a plan to install pickleball courts.

The park on Exchange Street is home to the Junior Raiders Pop Warner football program and is where the funding was announced.

The money was initially awarded as part of the 2018 State and Municipal Facilities Grant but it was doubled this year.

It will be used to add more audience seating, replace the scoreboard and add an Americans with Disabilities Act compliant restroom facilities.

The park is named for Colonie native and 31-year veteran of the State Police who died from 9/11 realated illness.

Improvements to include repaving the tennis and basketball courts.

The money is earmarked for design development and construction at the 127-acre park that will feature numerous paths and trails as well as open space.

“One of the most exciting things about being in this position is having the opportunity to give back to the community where I grew up,” Steck said. “Supporting our parks is a direct investment into our communities and helps foster happy and safe neighborhoods.”

LETTER to the EDITOR: Illegal guns are the problem