A tale of two towns around the port 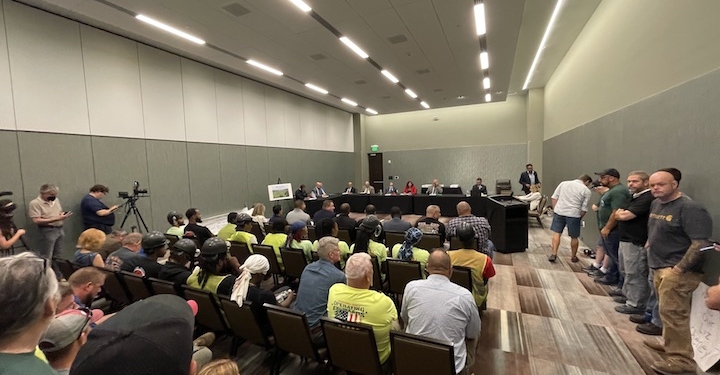 ALBANY — It was standing room only as the Albany Port District Commission hosted an audience to hear both admonishment and support for the $350 million offshore wind turbine tower manufacturing facility.

The Commission moved its monthly board meeting to a conference room at the Albany Capital Center to better accommodate a larger audience on Wednesday, Aug. 31.

Its meetings have drawn more attention since contractors cleared trees off of Beacon Island in May. Since then, neighboring residents have sued the port and the Town of Bethlehem over claims they were not properly notified.

The nearly three dozen residents who have filed suit against the expansion plan have flooded town board meetings, using the public comment section as a platform to demand plans be walked back. With the lawsuit pending, board members have held back commenting on specifics. The Bethlehem Planning Board has gone as far as to redefine public comment rules, limiting comments to current agenda items only.

But in Albany, the audience dynamic was splintered. Of the nearly 100 in attendance, more than half were union members and apprentice workers, identified by hard hats and bright yellow safety vests. Still more represented neighborhood advocate groups who “relished” the promise of more than 500 jobs going to Albany residents.

Lyons was the first to speak before the board, later followed by community leaders who shared excitement over opportunities specifically for an impoverished South End neighborhood. They included Kereem Berry, Executive Director of The Multi-Craft Apprenticeship Preparation Program. The Rochester-based not-for-profit organization has recently opened a training center in Albany, providing a gateway into a career-track opportunity in the construction industry to historically under-served populations — particularly Black men and women.

“Now they have a chance, they have a voice and the opportunity to actually have a career and a middle-class lifestyle,” Berry said. “What we’re trying to do is get people out of poverty and get them actually living wage. Is that they will be able to have their families, and generations to come, get out of that vicious cycle of poverty.”

The haves
and have nots

Bethlehem residents who made it to the midday meeting continued to speak of their concerns with coal ash deposited on Beacon Island over decades and assumed disturbed by the clearcutting of approximately 80 acres of trees in May. The port contends it had received proper approval before removing the trees from the island, and will contain the ash with a concrete cap. Regardless, neighboring residents believe the project will introduce arsenic and other chemical elements into the local drinking water.

“So the question I came here to ask rhetorically today is, why are we on opposing sides regarding the danger posed by coal ash island?” asked Silvia Rowlands, adding that her Glenmont home was just down the street from Ezra Prentice Homes. The housing development has long been the center of arguments over pollution problems, including the rail transport of oil. “We are not opposed to union construction,” she added. “We’re opposed to toxicity.”

The climate in the room was contentious, as evident by an anonymous comment from the room. “Bet she lives in a nice house,” an unidentified man said as Rowlands walked away from the podium.

Tom McPheeters, Strategic Advisor and Manager of South End Community Collaborative, said he did not find the Glenmont residents’ claims that they were unaware of the looming project as plausible.

“It was covered in the Times Union. So this 11th-hour attempt to stop the project that is so far along and so important to both the state’s climate change goals and other people who are, after all, your neighbors has me scared,” said McPheeters, adding that their efforts may not reverse the decision but could “run out the clock.”

The former Spotlight News editor recalled how Bethlehem community fighting for causes that benefited their neighborhoods and schools, doing so with resources the South End residents do not have.

Like Bethlehem, Albany residents have labored against hazardous truck traffic initially thought to originate from the port. Instead, he said, they come from industries south of the port, already existing in Bethlehem. He asked that town residents to channel their focus on pressuring the port and its tenants to electrify their trucking fleet.

“Let’s join together to make sure that the port and its tenants do the right thing. Live up to their promises, and the D.E.C. and E.P.A.,” said McPheeters. “Keep the pressure on everybody and to continue to fight to get those trucks electrified.

“By the way, if you haven’t driven through the South End, try to do so on your way,” he said.

Stewart’s has the best milk in the state