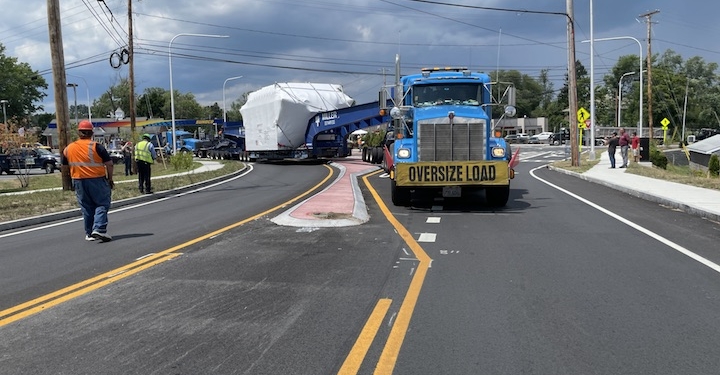 GLENMONT — A cadre of utility crews and law enforcement officers aided the transport of a nearly 500,000-pound load through the roundabout en route to the Port of Albany on Thursday, July 28.

The 495,000-pound naval reactor started its orchestrated jaunt across town from Cairo at about 9 a.m. State police controlled traffic across both lanes of Route 9w while utility and highway crews scrambled to extract traffic signs and power lines that were in the way.

Standing approximately 25 feet tall, bucket trucks often sped ahead of the convoy to lift traffic signals high enough for the transport truck to pass under.

The convoy trekked north to the Glenmont Roundabout, where it turned off onto Glenmont Road before it reached River Road and finally the port.

According to initial reports, the naval reactor was destined for a naval base in Connecticut. The Times Union later quoted an official from the Port of Albany that the cargo was scheduled for a different naval base in Newport News, Virginia.

Naval reactors are used to generate propulsion for any one of the fleet’s various ships.

The day’s travel lasted approximately six hours, stopping at every low-hanging utility wire or traffic signal that crossed the convoy’s path between Cairo and the Port of Albany. The size of the reactor prevented the use of railroad cars. Where utility trucks handled power lines, State Police officers directed traffic away from the convoy Where needed, highway crews disassembled road markers and other roadway signs to clear the path.

The State Police posted a public service announcement on its Facebook page the previous afternoon, warning local motorists to choose alternative routes on Thursday. Some people, however, took the opportunity to complain, questioning why the convoy didn’t run during the middle of the night.

Others expressed doubt that the convoy would successfully pass through the Glenmont Roundabout. Construction on the $4.9 million traffic circle concluded in June, a year after work began. The project, initially proposed in 2017, had experienced few delays related to the pandemic.