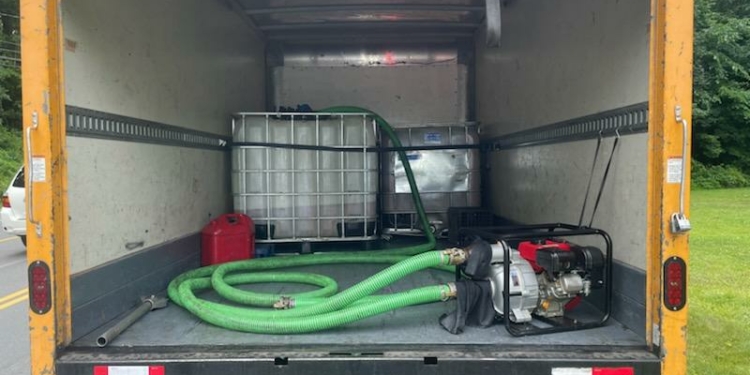 The inside of the rental vehicle showing the tools used to allegedly steal cooking oil. (via Colonie police)

COLONIE — Police arrested two men from Yonkers on Friday, June 17, and charged them with stealing cooking oil from Paesan’s Pizza on Loudon Road.

According to Colonie Deputy Police Chief Robert Winn, a loss prevention representative from Baker Commodities, a company that recycles used cooking oil, spotted the alleged theft by a remote surveillance camera at around 7:30 a.m. and called police.

Responding officers located and stopped the truck on Loudon Road near Maxwell Road and were able to recover the stolen property and arrest the two suspects.

The investigation has revealed that the truck was a rental and that these suspects may have been involved in multiple recent larcenies in this area — including in Albany, Schenectady, Saratoga County and Warren counties — as well as in Massachusetts, New Hampshire, Vermont and Maryland.

The investigation is on-going and additional charges are possible. Anyone with information about this investigation or the defendants is asked to contact the Colonie Police at 518-783-2754.

The two arrested are each charged with the misdemeanors of criminal possession of stolen property, possession of burglar tools and attempted petit larceny.

The Spotlight is not publishing their names because at this time the crimes for which they are accused do not elevate to that of a felony.

Both were given an appearance ticket to appear in Colonie Justice Court on July 6.

Used cooking oil is valuable because it can be recycled into biodiesel fuel and used to fuel vehicles that run on diesel, which, as of Saturday, June 18, was going for an average of $5.50 a gallon.

Parenting with Confidence: Celebrate dads and all they do

Police investigating altercation between faculty and students at Colonie High