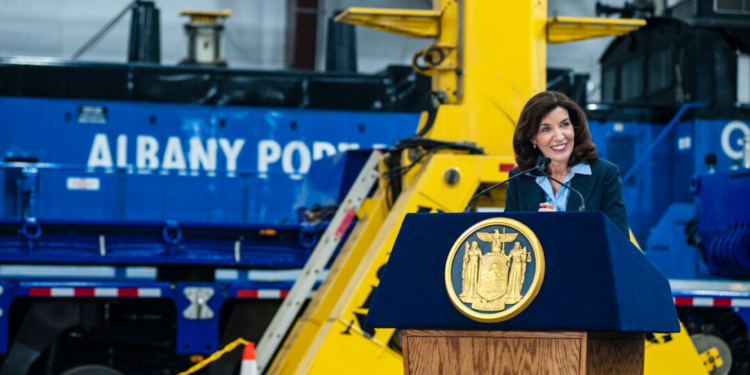 ALBANY — Gov. Kathy Hochul stood alongside U.S. Secretary of Energy Jennifer M. Granholm, Congressman Paul Tonko and other elected officials from the Port of Albany on a cold Friday morning to announce the finalization of contracts between the New York state Energy Research and Development Authority and Empire Wind Offshore LLC and Beacon Wind LLC on, Jan. 14.

Each contract a 50-50 partnership between Equinor and bp, for the Empire Wind 2 and Beacon Wind offshore wind projects, representing a key milestone in the advancement of offshore wind development in New York.

“We know what it takes to build and sustain for the future, it’s in our DNA as New Yorkers,” Hochul said. “By advancing these significant offshore wind projects, we can maintain our cadence for developing projects that will spur much-needed green job creation and investment. No state has felt the impacts of climate change more than New York state, and now more than ever, we can continue to lead the way with our ambitious, nation-leading vision to transition to a renewable energy and a cleaner, greener future.”

The $350 million wind tower assembly facility will expand the Port of Albany’s current footprint, pushing south down the Hudson River shoreline into the Town of Bethlehem. Town Supervisor David VanLuven, who was in attendance for the press conference, said he was excited to see the prospective benefits of green energy development coming out of Bethlehem.

“People sometimes think of Bethlehem as a sleepy little community,” he said, “but from here we have the promise of 500 jobs in the Port of Albany, another 1,500 jobs coming from Plug Power. The future of Green Energy is unfolding right here in our town.”

Friday’s announcement formally closed the state’s second offshore wind competitive solicitation and also includes the first awards for the state’s Offshore Wind Training Institute. Coupled with this week’s issuance of the Bureau of Ocean Energy Management’s Final Sale Notice for the New York Bight and the State of the State announcement of a nation-leading $500 million investment in offshore wind ports, manufacturing and supply chain to be integrated within NYSERDA’s 2022 solicitation, these events represent a significant step forward in advancing the Climate Leadership and Community Protection Act goal to develop 9,000 megawatts of offshore wind by 2035.

Also announced today were the first round of competitive awards under the State’s $20 million Offshore Wind Training Institute, the largest public investment in offshore wind workforce development by any state in the U.S. Through a partnership between the State University of New York’s Farmingdale State College and Stony Brook University on Long Island, the training institute aims to advance offshore wind training programs and the educational infrastructure needed to establish a skilled workforce that can support the emerging national offshore wind industry. The Institute will certify and train 2,500 New York workers beginning this year to support both offshore and onshore renewable energy projects.

“Hats off to Governor Hochul for taking a huge step towards lowering energy bills for New York households, creating thousands of good-paying jobs, and advancing President Biden’s goal of a robust offshore wind industry in America,” U.S. Secretary of Energy Jennifer M. Granholm said. “We can and will overcome the challenge of climate change, and we’ll do it one clean energy worker at a time.”

The governor’s office said the average bill impact for customers will be approximately 0.8 percent, or about $0.95 per month. Total project costs, including a cost-effective average all-in development cost of $80.40 per megawatt-hour, are approximately 7 percent lower than those of NYSERDA’s 2018 awards.

The 1,260-megawatt Empire Wind 2 and 1,230-megawatt Beacon Wind projects were provisionally awarded in January 2021 as a result of NYSERDA’s second offshore wind competitive solicitation. Expected to enter into commercial operation in 2027 and 2028, respectively, the projects is anticipated to strengthen New York’s economy and further drive investments in ports to directly support offshore wind projects while establishing New York as the hub of the offshore wind supply chain. NYSERDA payments to the projects will commence once they obtain all required permits and approvals, complete construction, and begin delivering power to New York.

The final project contracts include both public and private funding commitments, including $644 million in port infrastructure and $357 million in the nation’s first offshore wind tower manufacturing facility to be built at the Port of Albany. Another $287 million is earmarked for an offshore wind staging and assembly facility at the South Brooklyn Marine Terminal, and more than $8.9 billion in anticipated in-state spending. More than 5,200 jobs is anticipated to be created, backed by prevailing wage and project labor agreement commitments.

“We know New York’s potential for offshore wind development is tremendous. Today’s exciting news will play a pivotal role in expanding this industry, creating good-paying jobs, training the energy workforce of the future, and helping address our most pressing climate challenges,” said Tonko. “Thanks to all involved in this forward-thinking announcement that invests in our region and pushes New York further down the path to becoming a powerhouse of wind manufacturing.”

The Port of Albany extension initiative was part of the bid Equinor submitted in response to the NYSERDA’s offshore wind energy solicitation, which sought up to 2.5 gigawatts of offshore wind and multi-port infrastructure investment plans.

The construction of an offshore wind tower/TP manufacturing facility at the Port of Albany is expected to provide an immediate economic boost to the area as it recovers from the COVID-19 pandemic, creating new employment opportunities as early as the second half of 2021.

“Today’s announcement sets Equinor and bp on the path to provide over 3.3 GWs of offshore wind power for New York,” said President of Equinor Wind US Siri Espedal Kindem. “It also offers a large-scale, tangible demonstration of the incredible economic activity and carbon reduction potential being driven by New York’s green energy transition. We are proud to help lead the growth of this exciting industry in New York.

Foundational welding skills training will be provided by the Capital Region Educational Opportunity Center, a division of HVCC with additional non-credit training and certifications be provided at the college’s main campus. The college will also partner with regional manufacturers building turbine components to provide a skilled workforce pipeline of welders and fabricators, aiming to train 75 individuals, including 65 from priority populations and disadvantaged communities.

“Hudson Valley Community College is committed to helping supply the workforce for New York State’s clean energy future,” said Penny Hill, Dean of Economic Development and Workforce Initiatives for HVCC. “In addition to those trained in welding and fabrication, the college is ready to provide other educational opportunities to support the offshore wind industry. We look forward to partnering with manufacturers to provide job training and build stronger, more resilient communities.”

New York State has five offshore wind projects in active development, the largest portfolio in the nation. This initial portfolio totals more than 4,300 megawatts and will power more than 2.4 million New York homes and is expected to bring a combined economic impact of $12.1 billion to the state. The projects are also expected to create more than 6,800 jobs in project development, component manufacturing, installation, and operations and maintenance. Achieving the State’s 9,000 megawatt by 2035 goal will generate enough offshore wind energy to power approximately 30 percent of New York State’s electricity needs, equivalent to nearly 6 million New York State homes, and spur approximately 10,000 jobs.

Friday morning’s announcement from the Port of Albany was the first leg of a regionwide tour that included stops to the University at Albany and Hudson Valley Community College. Senator Kirsten Gillibrand was said to be in Washington, D.C. at the time of the morning press conference, but later joined Hochul throughout the day’s tour.

“As we celebrate New York’s innovation in clean energy this week in Albany, I’m thrilled to announce this key partnership between the New York State Energy Research and Development Authority and Empire Wind Offshore LLC and Beacon Wind LLC,” she said. “This marks another milestone in our state’s leadership and innovation in clean energy and offshore wind development. I look forward to continuing our great work to bring clean energy jobs and technology to New York.”