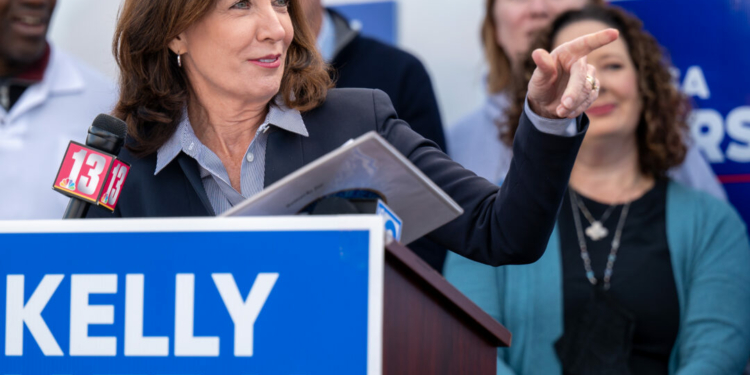 LOUDONVILLE — Gov. Kathy Hochul got some good news in her bid to get elected to a full, four-year term with a new poll finding 36 percent of New York Democrats saying they would vote for her if the party’s primary were held today and just 18 percent favoring her nearest challenger, Attorney General Letitia James.

Twenty-four percent are undecided or back another candidate.

“Hochul continues to have a double-digit lead over her opponents in the Democratic gubernatorial primary and, unlike what is often seen in early polls, it is not completely based on name recognition,” said SCRI pollster Steven Greenberg. “After all, Hochul and James have very similar favorability ratings among all voters — with nearly identical favorability ratings among Democrats — and de Blasio is the most known, and most disfavored, candidate among all voters and with just Democrats.”

Forty-two percent of voters still view Hochul favorability since she took over for the disgraced Gov. Andrew Cuomo — who resigned in August amidst a swirl of controversy that ultimately includes criminal sexual harassment charges — while 26 view her unfavorably. That is little changed from October when she had an approval rating of 42 to 26 percent.

Her job performance rating, though, is still upside down with 46 percent disapproving and 42 percent approving, according to the poll. In October it was 43 to 45 percent.

Most people think Hochul is honest and has integrity (56 percent,) she works hard (55 percent) and cares about the average New Yorker (49 percent.)

“A strong majority of Democrats say Hochul possesses each of these attributes, as do a plurality of independents. Republicans tend to say she does not,” Greenberg said.

Hochul and the Legislature will return to session next month and voters say creating economic opportunity (26 percent) and fighting crime (26 percent) should top the agenda. Eighteen percent think managing the pandemic should be a priority.

Ensuring public school teach an appropriate curriculum, addressing racial inequalities and working to ensure clean water and air were all a priority for less than 10 percent of the voters, according to the poll.

“Republicans, Democrats, independents, upstaters and downstaters all agree that creating economic opportunity and fighting crime are the top two issues they want Albany to address in the upcoming session. Managing the pandemic came in as third most important issue, more so for Democrats, downstate suburbanites and Black voters,” Greenberg said. “Ensuring appropriate public school curriculum, was the third most important issue for Republicans, with one in five making it the most important issue, while one in five Black voters said addressing racial inequality was their top priority.”

Nearly half of voters say that the federal Build Back Better Act will increase inflation, which they say is having a serious negative effect on the economy and their personal finances. Still, voters support BBB passage 52-28 percent. Six specific components of the BBB Act are each supported by between 62 and 90 percent of New Yorkers.

“While there is strong support for Build Back Better overall, there is large to huge support for each of the components,” Greenberg said “Seventy percent of Democrats support the BBB Act and at least 78 percent support each of the specifics. A plurality of independents supports the Act and a majority support each part. And although 60 percent of Republicans oppose the BBB Act, strong GOP majorities support four of the specific proposals.

This Siena College Poll was conducted Nov. 29 to Dec. 3 among 785 New York state registered voters. It has an overall margin of error of +/- 4 percentage points