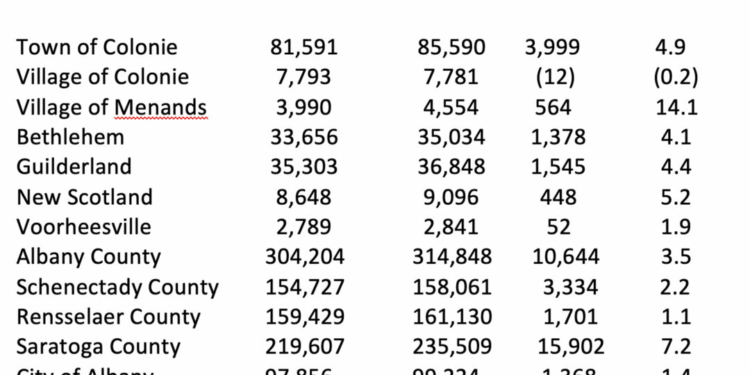 New York state picked up 823,147 residents, or a 4 percent increase, since 2010, according to new data released last week by the U.S. Census.

With an official population of 20,201,249 in 2020, it marks the first time the Empire State has crossed the 20 million person threshold. It represents the second fastest rate of growth since the 1960s, second only to the 5.5 percent in the 1990s, according to an analysis by the Empire Center. It is twice as large as the 2.1 rate of grown from findings in the 2010 Census.

Nationwide, there was a 7.4 percent growth in population and New York is the fourth largest state behind California, Texas and Florida.

The immediate Capital District is somewhat sheltered by any downturn in the economy or other indicators like dwindling population thanks, in large part, to the massive state government and the number of employees, but the majority of the growth occurred downstate, with New York City and the surrounding counties seeing an increase of 828,346, according to the Census. New York City, by far the nation’s largest city, saw an increase of 629,051 to 8.8 million people.

“Population declines were reported for 39 of the 50 upstate counties, mostly rural and suburban areas, while increased headcounts well above previous estimates were reported for the largest urban counties — starting with Erie County, which added 35,196 residents, according to the Census Bureau,” said the EJ McMahon, executive director of the Empire Center.

All four counties in the immediate Capital District saw an increase according to the Census Bureau, with Saratoga County seeing the largest growth of 7.2 percent and Rensselaer County seeing the smallest rate, 1.1 percent.

The Village of Colonie was the only local municipality to lose population and that was only by 12 people to a total of 7,781 according to the decennial head count conducted by the federal government. On the other side of the Town of Colonie, the Village of Menands saw a whopping increase of 14.1 percent to 4,554.

One direct result of tracking the number of people and where they live is how many representatives geographic areas will send to Albany and Washington. Based on this state’s growth compared to other states, New York will send one less representative to the House after falling 89 votes shy of retaining all 27 members.

Statewide, up to four Assembly seats and two Senate seats, according to McMahon, could shift from upstate to 12 downstate counties, which he defined as New York City, Long Island and the five counties of the lower Hudson Valley. Right now, 22 of 63 Senate districts and 50 of 150 Assembly districts are upstate.

Redistricting will take at least another year, so what Congressional seat will be eliminated and how state lines look for the 2022 election is still very much up in the air.

For decades the Republicans and Democrats each had a chamber to call their own and as such allowed each other to draw their own lines without challenge. Since the 2010 — in addition to holding onto a long-standing supermajority in the Assembly — and will control how the lines are drawn.

It will not be as cut and dry as in year’s past when the Legislature drew their own lines and then voted to approve them on the respective chamber floor. This year, for the first time since its creation in 2014, an “independent” redistricting commission will draw the lines based on population as applied to a set formula. The Legislature will still approves those lines, but cannot be modified unless two proposals are defeated. Right now, it takes three quarters of each chamber to approve the lines but an amendment to the state Constitution is one the ballot this November which would reduce that number to a simple majority. It would also require state prisoners be counted at their last place of residence rather than the prison where they currently live and would cap the number of state senators at 63.

“New York took a significant step to attempt to limit gerrymandering in 2014 with a voter-approved amendment to the state constitution that created an independent 10-member redistricting commission,” said Government Law Center Legal Director Richard Rifkin. “We are entering a new era in New York with respect to redistricting. How this will play out is, at this point, quite uncertain.”

Locally, the Albany County Legislature will also redistrict its lines and it has appointed the first four members of a Commission on Redistricting. They are:

• Sita Subbaram, of Albany, is an assistant professor in the Department of Surgery at Albany Medical College and previously served as a postdoctoral fellow at the Center for Cell Biology and Cancer Research in Albany and a research scientist in India. She serves on the PTA for the New Scotland Elementary School, volunteers with the Leukemia and Lymphoma Society and previously served on the National Little League Board.

• Thomas Clingan, of Cohoes, has held multiple offices including Albany County clerk from 1988 to 2013 and assistant county executive from 1979 to 1988. He currently serves as a member of the Advisory Committee for the Children’s Center at the Albany County Family Court, a board member for Council Services Plus, Inc., a member of the UAlbany Library Development Committee and is a founding member of the Capital Region Archives Dinner Committee.

• Joan Ramsey, of Albany, has worked at the New York State Education Department as the minority and women-owned business enterprises coordinator and compliance officer, and at the state Crime Victims Board as a program monitor and affirmative action officer. She also worked for the U.S. Treasury Department Office of the Comptroller and the Environmental Protection Agency.

• Mark McCumber, of Albany, has worked with the Federal Aviation Administration since 1980 in multiple roles, most recently as an Air Traffic Control Manager at LaGuardia and Albany International Airport. He previously served in the U.S. Navy where he attended Embry-Riddle Aeronautical University’s World-Wide Campus.

The four appointees will appoint five more members to the commission and there will also be a Majority-Minority District Reapportionment Subcommittee to focus on minority communities.

The Legislature has allocated $400,000 in the 2021 budget for expenses related to redistricting that may include consultants and mappers.

Anyone interested in serving on the commission or MMD subcommittee can complete the online questionnaire on the Legislature website at: www.albanycounty.com/redistricting.