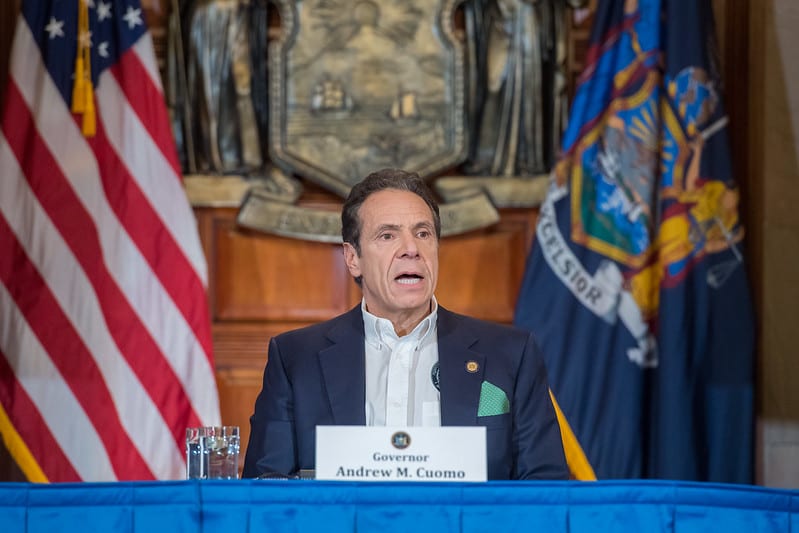 Gov. Cuomo, above, included educators and education leaders from across the state in the Reimagine Education Advisory Council.

LATHAM — About half of state voters, 49 percent, say Gov. Andrew Cuomo should not resign, according to a new poll by the Siena College Research Institute, compared to 41 percent who say he should.

That is a little better than a month ago with 51 percent said the three-term governor should step down amidst scandals including allegations of intentionally underreporting nursing home deaths during the pandemic, using state employees to work on his lucrative book while on the clock and numerous allegations of sexual harassment.

Cuomo’s favorability rating is 44-48 percent, up from 40-52 percent last month. His job performance rating is negative 42-55 percent, from 42-56 percent in April. Right now, 37 percent are prepared to re-elect Cuomo if he runs next year, compared to 53 percent who prefer someone else, up from 33-57 percent last month. By 58-35 percent, voters approve of Cuomo’s handling of the pandemic, down from 60-32 percent in April.

“To determine how voters view Cuomo this month one has to look at a pint glass with eight ounces of liquid and decide if the glass is half full or half empty,” said Siena College pollster Steven Greenberg. “Cuomo defenders will point to the uptick in his favorability and re-elect ratings, that a solid majority continues to approve of his handling of the pandemic, and more voters still say he should not resign rather than resign immediately. On the other side, the governor’s detractors will point to favorability, job performance and re-elect ratings that remain under water, a downtick in his pandemic approval rating and a rising number of New Yorkers who say he should immediately resign.”

By a nearly 2 to 1 margin, 42 to 24 percent, voters say Cuomo has committed sexual harassment, little changed from last month’s count of 44 to 22.

James has a 38-20 percent favorability rating – down a little from 39-17 percent in April – while two in five voters either never heard of her or don’t know enough about her to have an opinion.

• More than two-thirds of the respondents, 69 to 19 percent, think the worst of the pandemic is over, up from 60 to 27 percent in April.

• The poll was conducted before Andrew Giuliani entered the race

• Sixty-six percent of voters now say they have been vaccinated, with another 15 percent planning to.

This Siena College Poll was conducted May 16-20 among 793 New York State registered voters. It has an overall margin of error of +/- 4 percent.

NYSDEC warns drivers to “give turtles a brake”; keep an eye out for migrating wildlife