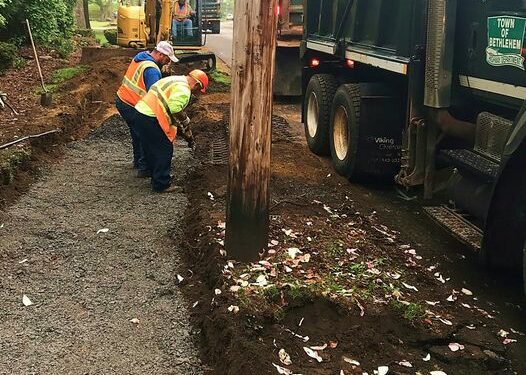 Highway crews have been out working on town sidewalks. Bethlehem Town Supervisor captured an image of one crew at work along Fernbank Avenue and Winnie Road in Old Delmar and shared it on social media last week.

“Our highway crews are hard at work replacing the old sidewalk,” stated VanLuven while sharing hashtags in support of Bethlehem Forward and Together, We Are One Bethlehem.

The town board discussed the subject of sidewalk repairs as recently as its April 14 meeting, when it passed a resolution to allow the highway department to dip into the General Fund/Capital Reserve Fund for up to $50,000.

Last November, the town’s Bicycle and Pedestrian Committee suggested that $100,000 be budgeted each year for sidewalk maintenance. It had also suggested an additional $2.85 million to install new sidewalks.

According to a recent Bethlehem Highway Department survey, about 25 percent of the town’s 43 miles of sidewalks are deficient.

The committee cited a visual survey from 2014. Since then, the committee had provided a long-term solution to maintain the town’s walkways, including a “Top Ten” list of sidewalks in need of repair. But, the committee said, even had there been earnest plans to follow through with past suggestions, it’d be “impossible” with the turnaround at the highway superintendent position.

The $50,000 limit matches what the town’s capital plan already suggests setting aside each year, but that was not to start until 2022. The committee had balked at that amount last year, saying such funds wouldn’t complete needed repairs.

An annual budget of $50,000 will afford repairs to two-tenths of a mile of sidewalk. The committee sees the need for 10.7 miles each year. Factoring inflation, the report estimates it will take 11 years to adequately repair sidewalks with an annual budget of $100,000, seven years at $150,000 per annum. But, $50,000 “we will never fix all sidewalks,” the committee stated.

Point of View: New era of policing in Bethlehem