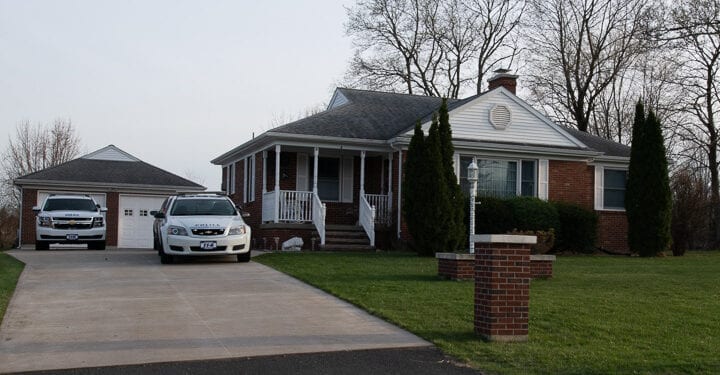 A Colonie police SUV and a patrol car sit in the driveway of 510 Boght Road on Saturday, April 10. (Jim Franco / Spotlight News)

COLONIE — Police identified the bodies found inside a Boght Road home and confirmed the murder-suicide is blamed, in part, on an escalating domestic violence situation.

Domestic violence has been on a sharp increase for more than a year and much of that can be blamed on COVID-19 and the lockdowns and social distancing.

“We are showing a 1,000 percent increase for crisis intervention calls and a 200 percent increase in sexual assault calls,” said Karen Zigler, director of the Albany County Crime Victim and Sexual Violence Center, while comparing 2019 to 2020. “It’s the isolation. People have had less outlets, they are less able to reach out for support. If there was tension or violence in a relationship, being confined with the individual does raise that tension.”

She said the percent increase is not a raw number of individuals because many of the calls are anonymous and one person could be calling multiple times. But, there has been a definite spike in domestic violence as well as sexual assaults and child abuse in Albany County.

Colonie Lt. Daniel Belles said police were called at about 7 a.m. on Saturday, April 10, to check the welfare of the residents at 520 Boght Road. Inside the neatly kept, one-story brick home officers found the bodies of 54-year-old Dorota Kokoszko and her husband, 57-year-old Marek Kokoszko.

Belles said the investigation revealed on Friday, April 9, Marek Kokoszko, a self-employed mason, shot and killed his wife, a respiratory therapist at Ellis Hospital, with a 22-gauge rifle and then killed himself with a shotgun.

“We have not yet determined what may have led to this incident, but there were many factors that likely played a role in the event, including recent domestic issues that have been escalating over the past few months, and mental health issues for Marek,” Belles said.

Police answered a domestic call at the residence in 2016, Belles said, but the incident was minor and no charges were filed at that time.

No one else lived with the couple and neither the husband or wife had a criminal history, Belles said. The weapons used in the incident, as well as others found in the home, were legally owned.

The huge spike in domestic violence is not unique to Albany County. In May, 2020, when the pandemic was still on the rise, lockdowns were in full swing and nobody was sure what was going to happen, there was a 12 percent increase in intimate partner victimizations reported to police departments outside of New York City for the first quarter of 2020 compared to the same period in 2019. In April, 2020, there was a 30 percent increase of reports to police from the first quarter a year prior.

In May, a task force created by Gov. Andrew Cuomo recommended, among other things, using technology to reach victims, provide more funding to programs like the Albany County Crime Victims Department, provide more housing for victims and not require domestic violence victims to file a police report to get services. Other recommendations include launching a public awareness campaign, educating men about domestic violence and targeting programs for victims who people of color and who are immigrants.

Zigler said the victims that call her department’s hotline do not necessarily call police first or ever. Some are looking for a safe way out of a bad situation while others are looking for information on what options and resources are available.

“Every situation is different. They know the situation the best. We offer a number of resources and we help them help themselves,” she said. “We will do everything we can to help them find safety.”

There are a host of reasons people are reluctant to call police including escalating an already bad situation should the police knock at the door, negatively impacting a couple’s standing in community, a lack of anonymity in smaller communities, feelings of shame and the victims blaming themselves, a lack of financial security and the victim having no place else to go after the police come and take a reports.

“There are more reasons to not call the police than to call until a person reaches a certain point. We get a number of calls anonymously, by people who do not want to call the police,” she said. “One of our main objectives is to develop a safety plan if the victim is looking to leave. We know that is often a flashpoint, when domestic violence escalates, so it is a critical time for the victim.”

See the chart for a list of resources available to domestic violence victims in and around Albany County.

SPOTLIGHT ON BUSINESS: Delmar Dental is a pioneer in dental health