Mahan delivers 14th and final State of the Town 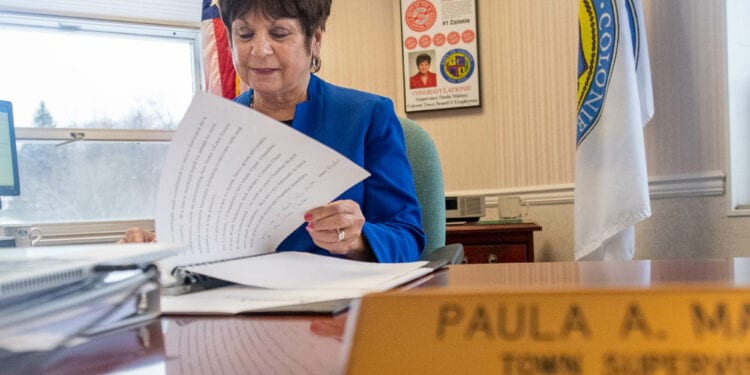 Town Supervisor Paula Mahan looks over her State of the Town speech while sitting at her desk in Town Hall on Thursday, Jan. 21. Jim Franco / Spotlight News

COLONIE — With COVID-19 dominating every aspect of life since March, 2020, Supervisor Paula Mahan emphasized the fact there were other accomplishments and efforts during her 14th and last State of the Town address.

“First, I’m very happy to report that Colonie continues on its strong upward trajectory,” said Mahan, who is retiring at the end of the year. “New and existing homes are selling throughout the entire town and businesses continue to show a strong desire to locate in Colonie. It has truly been a collaborative effort with residents, businesses, our schools and all levels of government to keep everything going.”

COVID, though, influenced nearly every decision as the town early on was looking at a $7 million deficit, due largely to a drop in sales tax revenue because all but essential businesses were shut down for months and continued to struggle with capacity and other restrictions when they were allowed to reopen. The initial worst case scenario was, she said, not as bad as projected but she and her administration still had to take unenviable courses of action.

“We had to take steps to fill that gap by furloughing 50 mostly part time employees, delaying replacement of vacated positions, mandating reductions of overtime, and eliminating all non-essential spending,” she said. “Fortunately, sales tax has generated better than expected revenue and we are expecting to be short revenue in the $3 to $4 million dollar range.”

Nobody is certain will COVID will lead us, and Colonie has implemented a number of measures allowing employees to work remotely and to offer services to the public while reducing person-to-person contact at Town Hall.

The address is traditionally presented first to a full house breakfast sponsored by the Capital Region Chamber of Commerce, but this year was given remotely via Zoom. It was later, on Thursday, Jan. 21, read to the Town Board and live streamed to the public.

While Albany and other Capital District cities saw unprecedented incidents of violent crime, shootings and homicides, and her own Police Department confiscated a record 26 illegal handguns in 2020, she said violent crime in town dropped by 1.4 percent. Also, in the 2021 budget, there is money allocated to hire five new police officers left vacant in 2020 due to retirement.

As per a mandate by Gov. Andrew Cuomo the town is reviewing the policies and procedures of its Police Department and a plan is due out shortly. In response to the death of George Floyd at the hands of Minneapolis police, the mandate requires each municipality in the state to ensure its police force “eliminate racial inequalities in policing.”

On the other side of public safety the Colonie EMS received the American Heart Association’s Lifeline Gold Plus for the fourth year in a row and selected as one of the 205 agencies across the country to participate in the Emergency Triage, Treat and Transport model by the Centers for Medical and Medicaid Services. Also, in 2020, the department began collaborating with Siena College to provide training and experience to students as part of an EMS crew.

In other departments, the 2019 Sanitary Sewer Rehabilitation Project along Albany-Shaker Road was completed and the $1.9 million project to construct a new pumping station at the intersection of Shaker and Maxwell roads is on schedule to finish up in June. Also, the Latham Water Department finished construction of a $3.2 million emergency water connection with the City of Albany that included the installation of nearly 7,500 lineal feat of new 24-inch pipe.

After its first full year in service, a deal reached to purchase power from the Schuylerville Hydroelectric Facility is reaping rewards. Since June, 2019, the town saved more than $280,000 and is projected to cut the town’s carbon emissions by 116,000 tons over the next 20 years.

“That’s the equivalent of planting nearly two million tree seedlings or taking 25,000 cars of the road next year,” Mahan said.

Before the pandemic took hold, 2020 started off on an ominous note when a computer hacker took the town’s system hostage and demanded a $400,000 ransom to get the data back. The town’s Management Information Department, though, had all the data backed up and while it didn’t cost any money in ransom, it took weeks to rebuild the system.

In addition to beating the hackers, the IT Department upgraded the tax collection system, upgraded the payroll system so it is now done in-house and completed a “stay connected” program that allows residents to get updates on town services via email.

The Parks and Recreation Department did not open the town pool complex and most summer programs were cancelled. With the lack of work, most of the furloughs were from that department. Still, in 2020, four miles of the Mohawk Hudson Bike Path were paved, a new pavilion was built at the Mohawk River Town Park and a new playground and parking area was built at the Crossings. Once golf was given the go ahead by the state, the town’s golf course had more rounds this year than the previous two with eight less weeks of play.

Also in 2020, Mahan hired a new planning director, one of the most difficult positions in Town Hall. Sean Maguire took the job in February, and a month later had to incorporate COVID guidelines into his plans for the office. In addition to shepherding through a number of projects, his office launched the first Temporary Outdoor Seating program allowing restaurants to create new outdoor seating spaces due to state imposed capacity restrictions  and as of Dec. 21, 2020,  Planning Department and IDA have provided more than $70,000 in grants to 11 Colonie small businesses to offset the additional cost of Personal Protection Equipment related to COVID-19.

Mahan was first elected in 2007, and earlier this month announced she would retire to spend more time with her grandchildren and do some travelling with her husband.

“It was my honor to serve the businesses and residents of the Town of Colonie for the last 13 years and I look forward to the challenges that face us in 2021,” she said in closing.

JIM FRANCO: Laying odds on who will run for Colonie supervisor