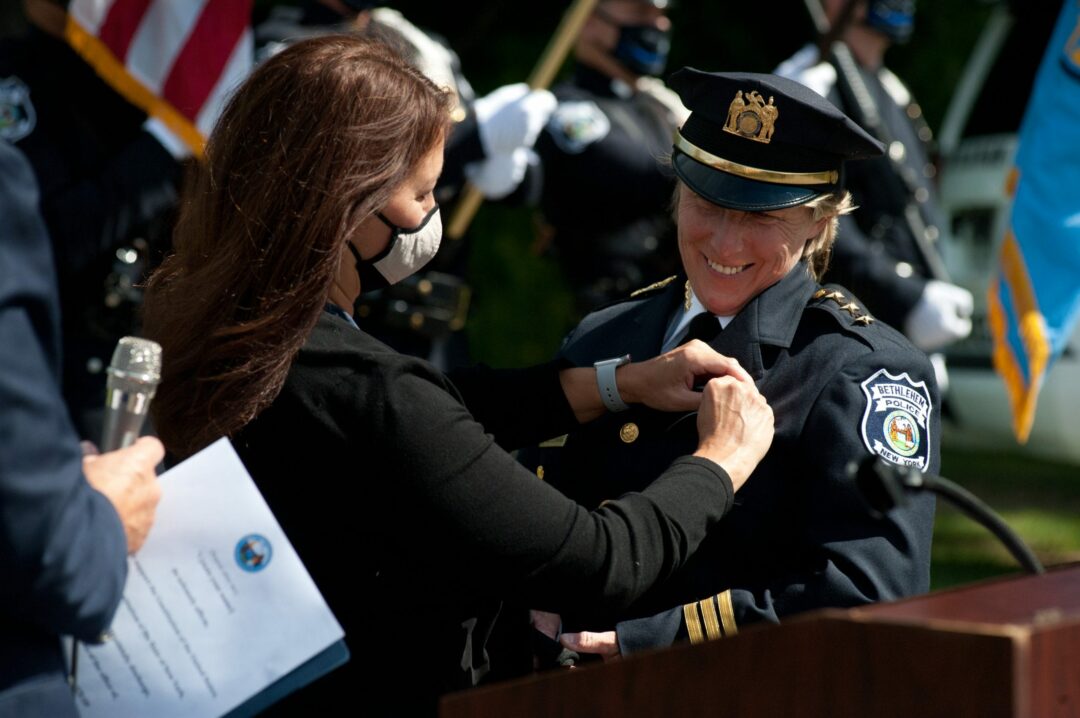 Gina Cocchiara is all smiles during her pinning ceremony on Monday, Aug. 31. She was named the town’s newest police chief. Michael Hallisey / Spotlight News

DELMAR — Albany County District Attorney David Soares claimed then-Bethlehem Police Detective Sgt. Gina Cocchiara was not forthcoming about her personnel file, and one recent case was adjourned as a result.

Soares’s claim was voiced in an Aug. 14 letter to Town Supervisor David VanLuven, days before Cocchiara was named Bethlehem’s new police chief. The letter expressed the DA’s consternation over not having a copy of the file after the details of which were scrutinized by local media.

Since the implementation of the 2020 Criminal Justice Reforms, the DA’s office has required police officers to complete questionnaires before preparing themselves for court. The questionnaires help the DA’s office establish whether or not there is impeachment information it must obtain and subsequently turn over to defense counsel.

A breakdown in the same discovery process led the state Supreme Court to dismiss a conviction in a high profile case just a month before. In a case involving State Police Senior Investigator Samuel Mercado, a 2017 drug conviction was dismissed on account the undercover investigator’s disciplinary record was not revealed prior to his testimony. A Times Union report in March revealed Mercado had three letters of discipline for administrative mistakes involving record-keeping and documentation.

Cocchiara denies the DA’s claim. The police chief said she was upfront with the DA’s office about her disciplinary file and was coached to answer the questions by the assistant district attorney.

“I’ve got a pile of crap in my personnel folder…, but none of this has questioned my honesty and integrity,” Cocchiara said. “I’ve always been upfront with the chief. I’ve always been honest. And, it’s not about any cases where I’ve done something where my integrity and honesty were ever challenged.”

Soares’ letter calls attention to a questionnaire completed on Feb. 13. The form was completed by someone in the DA’s office following a conversation with Cocchiara. Of the six yes/no questions on the form, the last asks if she had ever been the subject of an internal affairs, administrative, personnel or civilian complaint implicating her honesty or integrity. She answered both “yes” and “no” and included handwritten notes next to each response. She answered yes “as to personnel,” and no “as to honesty and integrity.” When the ADA later asked for clarification, Soares wrote his office “was subsequently provided with an indication… that she had nothing to report.” Subsequent forms dated Feb. 25 and July 10 each answered no to the same question. Cocchiara said she was told by the ADA to answer no after explaining away her personnel file.

The Spotlight obtained Cocchiara’s personnel file through FOIL, along with those of two other candidates who were vying for the vacant chief position. Previous to the repeal of 50a under state Civil Law in June, such files were protected against requests from the press and public. Details of one, two-week suspension and a near termination were later revealed.

“This presents a serious problem for our office in that we have relied on previous representations regarding personnel records when certifying discovery compliance with the court,” Soares wrote to VanLuven. “My office has now been put in the untenable position of having to explain to the court why we reported on impeaching information with respect to Det./Sgt. Cocchiara, yet two local newspapers were able to obtain records describing several disciplinary incidents that resulted in suspensions and other punishments.”

The town responded by sending the DA a larger, unredacted personnel file consisting of approximately 165 pages. The file shared with The Spotlight was approximately 90 pages. At the time of its release, Bethlehem Town Attorney James Potter said unsubstantiated claims were excluded before it was released. He did not disclose how many pages were redacted at that time.

“We relied on the limited information she gave us,” Soares later stated in an email to The Spotlight, “but learned there was significantly more when we read the articles and ultimately obtained the file.”

Several more incidents were excluded from this paper’s initial reports as they seemed to suggest an unfair environment. For the majority of Cocchiara’s career in the Bethlehem Police Department, she was the only woman on the force. Examples of those incidents include being written up for parking her service vehicle in the wrong place at the local high school, refusing to appear for a picture appointment at the end of her shift and disrespecting an officer when she crumpled an inter-office mailing and used vulgar language.

However, included in the file was a 2017 memo of counseling over destroying evidence, which could impeach testimony in future court cases. Cocchiara described the incident as an “honest mistake” that involved her disposing of personal property and that the case was already processed. According to the memo, the case had not yet been resolved. The item was among 338 pieces of evidence discarded while preparing for periodic evidence inventory.

One of Cocchiara’s cases, a misdemeanor animal abuse charge, was to appear in Bethlehem Town Court earlier this month. It didn’t happen. Instead, the case against the defendant, John Lozano, was adjourned in contemplation of dismissal. The settlement includes fines and surcharges, but allows for Lozano’s charges to be dismissed if he is not arrested in the next six months. It also requires he forfeit his animals and he is prohibited from owning animals for 10 years.

The DA’s letter also pointed — twice — to the town’s lack of an acting police chief in the weeks following Lou Corsi’s planned retirement from the agency.

From Corsi’s retirement on July 30 to when the town board approved Cocchiara’s appointment on Aug. 26, Bethlehem was without a police chief. In the near-month following Corsi’s retirement, the department’s letterhead replaced his name with that of Cmdr. Adam Hornick, its highest-ranking officer. He was also one of three candidates considered for the job. Instead of naming an interim chief, the town opted to go without.

According to state Civil Service Law, municipalities “maintaining a police department serving a population of 150,000 or less and with positions for more than four full-time police officers, shall maintain the office of chief of police.”

VanLuven said the board consulted with its town attorney and concluded it could go without naming an interim chief for five weeks under the department’s command structure.

“We felt that naming someone as an acting chief would create the perception that someone was a frontrunner for the position, when in reality, we were considering all three candidates on an equal basis,” VanLuven said.

VanLuven shared the DA’s letter with the board as it considered its choice for the next chief. The responsibility to appoint the chief fell upon the supervisor; however, he employed the board to serve an advisory role. He said he wanted the board to view “the whole spectrum” of information available.

“We looked at the whole spectrum of information that was available in evaluating which of the three outstanding candidates was the best person to lead the department,” VanLuven said. “We concluded that Gina was, and I really feel that’s still the case.”

The Spotlight previously reported the town board’s violation of Open Meeting Law as it continuously met for interviews and deliberations without posting public notice, allowing residents to attend without a call to executive order or recording minutes following each meeting. The town posted a public notice of its Aug. 21 meeting following that news article, but it has yet to post minutes from it.