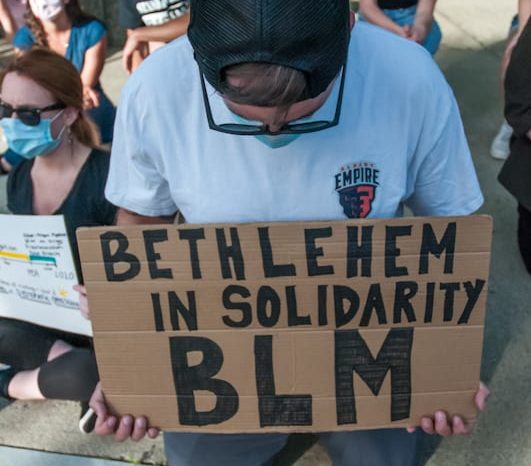 BETHLEHEM — Black lives matter is the common thread that has run through recent reform, so it’s no surprise to see those words cross the Town Board’s table in the form of a resolution.

“I have been thinking about this resolution for a long time, but I didn’t want it to be performative,” said Town Board Member Maureen Cunningham. “I wanted it backed by definitive action and positive steps forward.”

Reform has been the defining term for a town that has hosted several social demonstrations and named its first female police chief this summer. Residents have clamored for change, joining a national discussion sparked by controversial events surrounding arrest tactics and law enforcement’s use of deadly force.

The resolution, passed by a 4 to 1 vote on Wednesday, Sept. 9, focuses on systemic racism, that everyday practices within society are structured against people of color. The drafted resolution also mentions the town’s intent for a community-based advisory board through its Bethlehem Police Reform & Reinvention Collaborative.

The town is accepting requests from community stakeholders interested in sitting on such a board. The initiative falls in line with Gov. Andrew Cuomo’s mandate to reform law enforcement statewide.

“The town is forming an advisory committee to help ensure the Collaborative successfully improves trust, fairness, equity, and justice within our community and our police department and addresses any racial bias, discrimination and disproportionate policing of communities of color,” Town Supervisor David VanLuven shared in a statement.

A copy of the resolution was uploaded to the town’s website on the Friday before Labor Day weekend. Only a half dozen people attended the online board meeting, some of whom shared they were unaware of the resolution until that day. Town resident Michelle Sanders said she was “very happy” to learn of it.

“The resolution is important because, through my experience with the July 4 rally, it proved that racism is alive and well in Bethlehem,” she said. She later warned, “resolutions are great, but actions speak louder than words.”

The reception was mixed among the half dozen who spoke during the board’s public comment period. Those opposed expressed concerns with wording that appeared to endorse the Black Lives Matter organization. Those residents balked at the idea while attributing blame on the organization for recent riots and social unrest.

“I understand the principle but I’m concerned about this,” said Jay Ryan. “I like the idea but I’m very concerned with what the BLM movement is doing — in the wrong way.”

Jim Foster was the lone vote against the resolution, despite prefacing his decision by saying “it has great significance and it’s certainly an important thing that we are undertaking.”

The Republican’s argument was that residents had little time to review the resolution before the board’s vote. The draft shared with residents on that Friday was further revised after Cunningham received comments over the long weekend. The draft passed by the town board was uploaded “less than 7 hours ago,” said Foster.

“I think as we heard in the public comment period here tonight, and also the recent appointment of our police chief, critically important issues like this resolution are too important to rush through without allowing people ample time to review and provide input. And, that’s why I’d prefer to table it,” he said.

The rest of the board felt the latest revisions were not substantial enough to warrant delay. Though members of the board have openly expressed support, capitalizing Black Lives Matter as a proper noun on social media, the last draft omitted “matter” from the resolution’s title.

“We could polish this all we want,” VanLuven said, “but sooner or later we’ve got to come to the table and eat dinner.”

The initial resolution was drafted with input from the Albany County Legislative Black Caucus, Cunningham’s working group on race, and through members of the board.

“The biggest part that I get from reading this is ‘silence is complicity,’” said Town Board Member Dan Coffey. “We’ve all been moved by what’s going on in our country. Fortunately, Bethlehem has not seen a lot of the social upheaval that other communities have. We are moved by it and it forces us to take action.”

County Leg lays down the boom on ground-based fireworks

Students head back to the classrooms under unprecedented circumstances