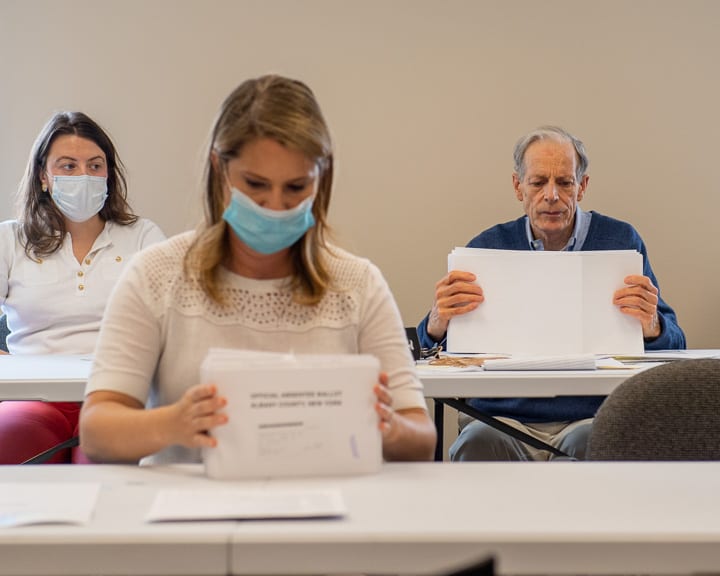 Matt Clyne is the only one without a mask. In the foreground is Republican Commissioner Rachel Bldi (Jim Franco/Spotlight News)

ALBANY — A powerful Democratic politician is pushing for a new elections commissioner because of his refusal to wear a mask during an absentee ballot recount.

Matthew Clyne, the party’s commissioner since 2008, was the only person out of about a dozen in the room counting ballots at the county Board of Elections not wearing a mask to prevent the spread of COVID-19.

Apparently, Clyne was not wearing a mask when the count of thousands of absentee ballots began on Tuesday, June 30. On Wednesday, Chairman of the Albany County Legislature Andrew Joyce, in a tweet, said Clyne “laughed” when asked about the lack of a face covering.

“So yea, we’re going to be looking for a new Democratic commissioner. Interested parties should submit their resume,” he wrote.

Clyne’s two-year term ends at the end of the year. According to Albany County Democratic Party Chairman Jack Flynn, who was at the BOE for the counting, he will appoint a committee to accept and screen resumes before it makes recommendations to the full county committee. The committee will then make a nomination to the county Legislature which will formally appoint a commissioner.

He said the process is the same every two years and should Clyne want another term, his name would be included in the mix.

“It’s a very good job. Matt has been a commissioner since 2008 and I’m sure the party wants to see a change,” Flynn said.

Clyne was counting ballots and unavailable for comment at the BOE. He did not return a phone call for comment, but told the Times Union newspaper he thought it was “unsanitary” to wear a mask while inside the BOE.

Flynn said he would post information about the job in the newspapers and on social media to open up the process to all interested and hopes the committee will make a recommendation to the party in time for its organizational meeting on Sept. 20.

It is not the first time Clyne has come under fire. In 2016, when the committee met to recommend Clyne for another term Carolyn McLaughlin was party chair. After Clyne passed that hurdle, and before the Legislature voted to formally confirm him to the $90,000-plus a year job, McLaughlin was ousted and Flynn took over as chair.

Flynn, who was working at the BOE, tried to get the Legislature to table Clyne’s nomination and wanted to reconvene another committee to re-interview candidates for commissioner. Clyne, instead of interviewing again, filed a lawsuit, won and was appointed to another term.

Clyne fired Flynn, but was Flynn quickly hired by Albany County Sheriff Craig Apple for about the same salary of $48,500.

Each party gets a BOE commissioner which is half governmental, ensuring fair and open elections, and half political, helping their respective party win elections.

Meanwhile, the count of Democratic Party primary absentee ballots to determine the next district attorney has been fast-tracked.

Incumbent David Soares and challenger Matthew Toporowski agreed to open the ballots and count them at face value rather than have representatives examine each ballot for irregularities.

After the machine count, Soares held a 53 to 45 percent advantage and after a day and a half of counting absentees that margin was about the same, Flynn said.

Absentees are also being counted in the Democratic primary between Assemblyman John McDonald and challenger Legislator Sam Fein. McDonald had a 53 to 45 percent lead after the machine votes were counted on June 23 and that margin is also about the same.

There are some 19,000 absentee ballots to count, an inordinately high number because of COVID-19 and a state mandate allowing people to vote by absentee if they chose rather than having to have a health excuse or if they were out of town.

Albany County sees a small spike in infections; no fatalities since June 24