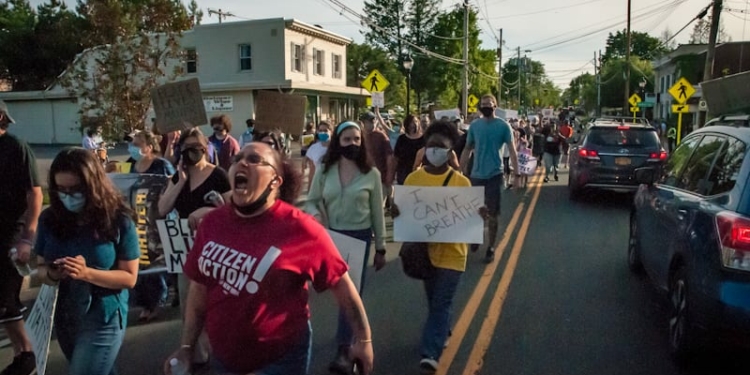 EDITOR’S NOTE: A previous draft of this article included pictures with a sponsored logo as a watermark. Those photos were removed under our own decision. The watermark logo is presented on pictures relating to arts, entertainment and sports. The initial post using that watermark failed to follow that practice.

DELMAR – More than 1,500 people gathered at the center of town on Monday, June 8 to rally in protest against a series of controversial deaths across the country of black people at the hands of law enforcement including that of George Floyd.

Protesters surrounded the intersection of Kenwood and Delaware avenues, commonly known as the Four Corners, holding signs now ubiquitous in cities and towns that have hosted similar rallies over the past week.

Town Supervisor David VanLuven, who attended the march and vigil, said, “It was inspiring and I felt proud. It says good things about the community. This is a time for people to stand out forcefully against systemic injustice in our culture.”

He continued, “I’m so proud of our residents and our police officers. It was just a positive night and now we need to make sure we translate that energy into real actions that result in real improvements. We can’t just talk the talk, we got to walk the walk.”

The Four Corners is a popular location for local demonstrations in Delmar. Each week, at least two organizations congregate to share messages of peace and faith as residents return home during rush hour traffic. Though the numbers of those groups appear quite modest to those who appeared on Monday night.

Traffic was not initially diverted away as people started to gather an hour before the demonstration’s 6 p.m. start. People filled the sidewalks surrounding the intersection and the crowd had spilled over onto the sidewalks leading to the center of town.

Motorists were still able to drive through as chants of “black lives matter” and “no justice, no peace” resonated across the streets. One motorist in a pick-up truck stretched out his arm to stick his middle finger out as he drove by. Another driver yelled out “all lives matter” moments before. However, those standing with signs were greeted with an overwhelming amount of supportive honks by those driving through.

After a moment of silence in which demonstrators knelt on the concrete for nearly nine minutes — the length of time in which Minneapolis police officers placed their knees upon Floyd — a procession of people marched north down Delaware Avenue. Despite the impromptu march, Bethlehem Police kept participants safe while directing traffic away.