One town, one heart: ‘Together, We Are One Bethlehem.’ 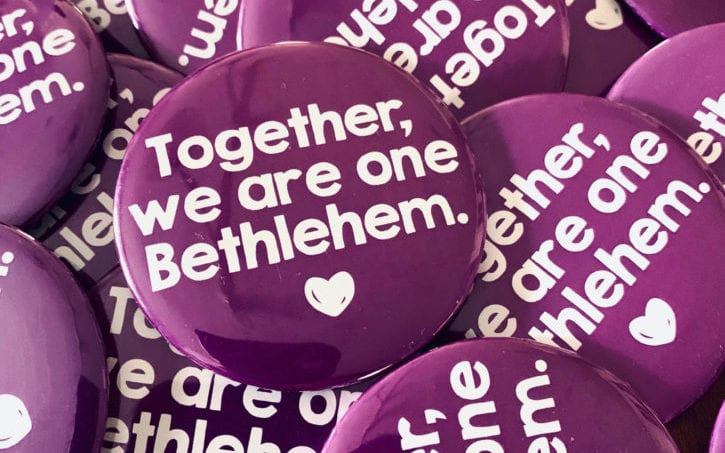 Americans had approached 2020 as a divisive political year, but current events have separated communities with quarantines and social distancing instead.

The physical divide is a challenge one group of community leaders has decided to campaign against in a nonpartisan way.

Purple and white signs that read “Together, We Are One Bethlehem” are quickly appearing around town, dotting roadsides like the crocus that usher in spring. But since the emergence of the COVID-19 pandemic in March, people have stayed indoors. Farmers markets and live music gatherings — the usuals harbingers of spring have fallen silent and people have grown weary as to when they will return.

Social media has shown neighbors rebelling — responsibly — against their new sequestered lifestyle. Operas are sung from the balconies of Florence, Italy. Rooftop yoga is a thing in Seville, Spain. And no one is complaining of the loud music played in Chicago, as everyone dances the night away from inside their apartments. The world has noticed.

Mark Joseph Kelly recalled such an observation made by his neighbor, Nathaniel Reichman. Music is Reichman’s life. The Grammy-nominated producer has had his hands in television, film and classical music. COVID-19 has pushed the pause button on the entertainment world. But, Kelly said those images from across the world inspired them to take action.

“Together, We Are One Bethlehem.” is a grassroots meant to bring people together, said Kelly. His professional experience in marketing and communication was put to task. In a country divided by coronavirus and polarizing political issues, how do you get people together?

Kelly has navigated through community endeavors in the recent past. He spent more than a decade as a member of the Delaware Avenue Enhancement Committee. The experience was worthwhile, but he noticed the political divide in the most ironic way.

“There are beautiful sidewalks that we now have in our core village,” he said. “I’ll never forget. Watching people who I know, who would see someone walking towards them, cross the street to avoid talking to them because of some political beef.

“In this moment in time, this is it,” he said. “We’re all breathing the same air.”

Kelly has found help from a handful of community leaders who include Maureen McGuinness, of the Bethlehem Chamber of Commerce; Steve Peterson, of Bethlehem Business Bounce Back; Rob Sawyer, co-owner of Our Towne and Sawyer Screen Printing; David VanLuven, Bethlehem Town Supervisor; and John McIntyre, publisher of Spotlight Newspapers.

“Red plus blue equals purple,” said Kelly. It’s a play on how people associate themselves with the two primary parties. Mixing the colors together like the paint on Bob Ross’ palette, you find the color of this “apolitical” campaign. With respect to one another’s position within town, Kelly said politics were set aside. “If you’re bringing a political message to the party, please don’t.”

The initial thought was to germinate a visual movement that would draw townspeople together in one declaration that could be shared over Facebook and Instagram. That idea evolved, Kelly said, with an “old school” approach involving lawn signs, shirts, pins and coffee mugs each sourced by Bethlehem businesses.

The Bethlehem Chamber of Commerce will host distribution of the merchandise on Saturday, April 18 in front of its Main Square storefront in Delmar. It will be outdoors and items will be handled by volunteers in masks and gloves for safety. Merchandise will be available for purchase. Money received will solely go back to purchasing more merchandise. Kelly said, there are no profits to be made.

As the days of isolation continue, the awareness of anxiety and loneliness among area residents is also in mind

“We already have the team in place to do this,” said Kelly. “To knock on the door, step back at a safe distance, and with a smile say, ‘Would you like this sign for your front lawn, because we’re thinking about you.’ … After this is all through, there’s no reason this can’t be a timeless message going forward.”

Donations can be paid by check to the order of the Bethlehem Chamber of Commerce, with a memo identifying Together We Are Bethlehem. For more information, visit https://www.facebook.com/TogetherWeAreOneBethlehem.