50 years of the Fifth Grade Musical at Slingerlands Elementary 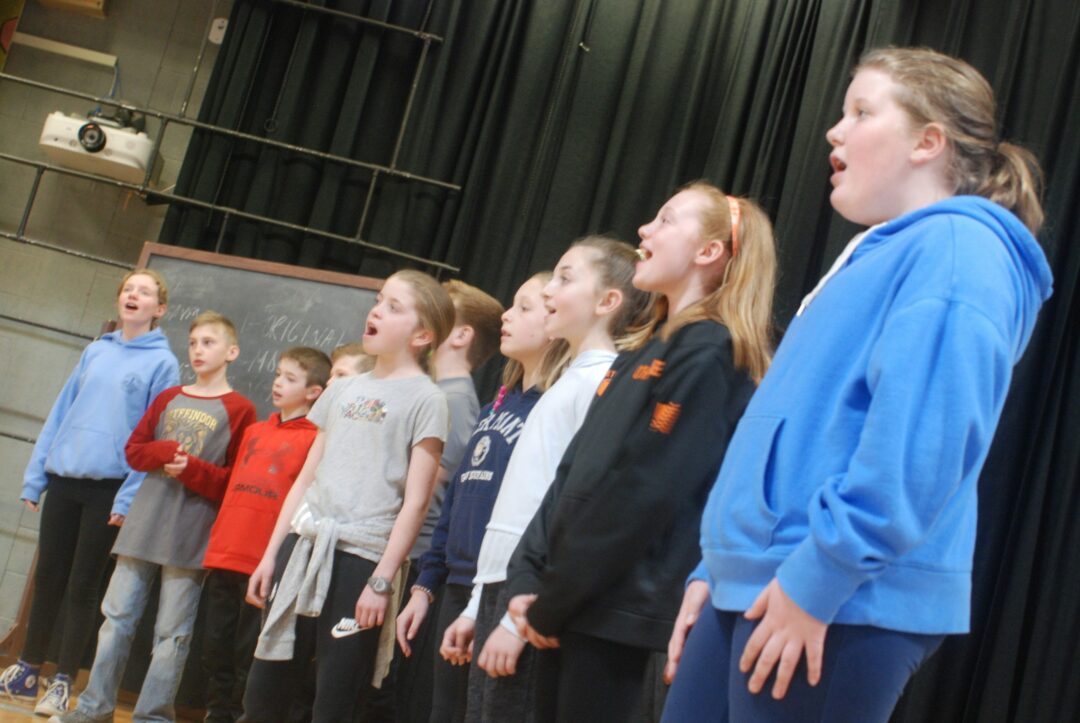 SLINGERLANDS — Slingerlands Elementary School will celebrate the 50th anniversary of its Fifth Grade Musical with a stage production of “Our School” this week.

“Our School” is directed and written by teacher Lester Betor in the style of “Our Town,” a 1938 play by Pulitzer Prize-winning playwright Thornton Wilder. While the latter’s story revolved around a fictional American town and its everyday citizens in the early 1910s, the former will focus on Slingerlands Elementary School’s history, some of its past and current faculty, and the longtime musical program.

Performances will be held on Thursday, March 5 and Friday, March 6 at 7 p.m. at the school auditorium; doors open at 6:15 p.m. and seating is first-come, first-served. While advanced tickets were sold by Wednesday, Feb. 26, limited tickets for $3 each may still be available at the door.

Betor said “Our Town” is his favorite play; he remembered watching it in high school and he “often wanted to do something based on that.” As “Our Town” is staged with few and minimal props, he said he liked how imaginative the experience was while still enjoying its story.

Betor has been involved in six stage productions at the school and “Our School” will be his last, saying that he wants to go out on a high note and it felt right that it ties in with the musical program’s 50th anniversary. He added that “Our School” is a great way to reflect on the importance of the school’s musical program, the opportunities it has given to faculty and students through the years and it recognizes key faculty members.

According to Betor, the Fifth Grade Musical began in 1970 by the late music teacher Virginia Spelich, who died in 1994 at 70. It originally started like a spring concert with a few speaking roles for students and some costumes. But as years passed, plays became staged and many students were given cast and crew roles.

This year, the 90-minute “Our School” production will have three acts and involves 76 students — 60 are portraying characters on stage and 16 handling crew duties. Betor said more students have been able to be involved because since there are three acts, one character may be played by a different student in each act.

“We try to find the kids’ strengths and work with them. If a kid feels too scared to get on stage, they could work backstage, for example,” Betor said.

Bonacquist said, “My favorite part about the musical is that every kid who wants a part gets a part. For many of them, it’ll be the only opportunity they’ll have to be in a production without the chance of getting cut, which happens in middle and high school. They cut kids there in auditions. But here, if a kid auditions, they’re in. If they want a solo or one line, they try out and get a part.”

Kelly Ward, one of three parent co-chairs who help support the musical, expressed gratitude to parent volunteers who helped bring “Our School” to life and were understanding of their children’s rehearsal schedules. Ward, whose daughter portrays Spelich in “Our School,” said parent volunteers have been involved in hair, makeup, costumes, props, designing the program, poster and logo, organizing the cast party and handling ticket sales.

“You definitely can’t do them without parents’ help and a lot of them luckily choose to be involved in things they’re talented in,” Ward said. “People who choose costumes are creative and can sew, for example. One of them [Fargione] has a background in graphic design and did the beautiful program’s logo and poster.”

Betor said “Our School” will feature numerous songs, that he purchased the rights for, which will complement the story. Songs he chose include Neil Diamond’s “Sweet Caroline,” Pharrell Williams’ “Happy,” the Beatles’ cover of “Twist and Shout,” ABBA’s “Dancing Queen” and Andy Grammer’s “Keep Your Head Up.”

“As I was writing ‘Our School,’ I’m thinking about songs I’d like to use and traditionally, I use Broadway musical songs and this year I decided to make it a little different. … The kids don’t usually know the songs until we start singing them and then they become fans of them and their music,” Betor said. “This year, I think they love ‘Sweet Caroline’ especially.”

Bonacquist brought up that “Our School” will also feature a new piano that cost over $7,000; Slingerlands Elementary School received the new instrument two weeks ago, thanks to Slingerlands students’ parents, a school fundraiser and the Bethlehem Music Association. It is being dedicated to the Fifth Grade Musical’s 50th anniversary.

“I’ve been here for 20 years and it’s hard to believe that the musical program has been around for 50,” Bonacquist said; she will retire after this year. “To me, it is really exciting and a huge celebration for a tradition that really means so much to this community.”

During a brief tour of the school’s hallways, she showed many framed photographs of past musicals and their casts through the years and she said there have been times where there was not enough space to continue hanging all of them.

When asked if he experienced pressure in directing the musical for the 50th anniversary, Betor said, “I think there’s a lot to live up to and it’s different. In years past, I haven’t had to worry about the musical being on anyone’s radar besides the fifth graders’ parents. But this year, it’s a bit more pressure and for me, it’s my last one. I want it to be great.”

He added that numerous former faculty members and Spelich’s family have been invited to watch the performance this week too. “I think it will be cool that Mrs. Spelich’s daughter will be there and we reached out to former principal David Murphy, who’s the only surviving principal who lives in Florida now, as well as all the former music teachers,” he said. “Some have said they’re excited and we’re looking forward to it.”