Electric vehicle chargers may spring up in Bethlehem 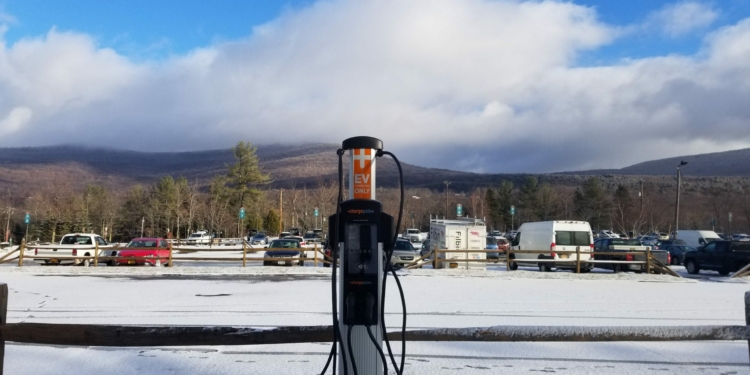 The five potential electric vehicle charging stations that the public can use once they are installed at three lots on Bethlehem town property will look like the one above. Photo by Christopher Carmody

BETHLEHEM — Residents may start using new electric vehicle charging stations (or EVCs) that could be installed on town property this spring.

“I think Bethlehem needs to ramp up our efforts to move towards clean energy and I think we really need to take advantage of the programs that already exist to help us get there,” said Town Board member Maureen Cunningham.

Although there are already some EVCs throughout Bethlehem, she said there are none on town property yet and she has been working on changing that since early 2019.

At the Jan. 22 Town Board meeting, the members unanimously voted to adopt a resolution authorizing the town to request rebate funding from National Grid and the New York State Energy Research and Development Authority for EVC purchases and installations. “The proposal is to install five Level 2, dual-port EVC stations that the public can use,” she said. “It gets really confusing but basically my goal was no net capital costs to the town which is how we have the proposal laid out now.”

According to Cunningham, the proposed total capital costs is $81,300 for installation and infrastructure; each EVC will have two charging plugs which each costs $4,000. She said the town will soon apply for around $46,500 in rebate funding to National Grid and then for $40,000 to NYSERDA; approval is required and expected in around April before the town can purchase and install the EVCs.

An EVC supplies electric energy to any plug-in electric vehicles and smartphone apps like Plugshare and Chargepoint help people locate and use EVCs, track how long recharging takes and pay for it electronically. According to NYSERDA, Gov. Andrew Cuomo announced in April 2019 that the number of electric vehicles in the state increased from 24,551 in 2017 to 36,854 in 2018. He also envisioned the state to have 850,000 electric vehicles by 2025 and two million by 2030.

The theme of sustainability is not foreign to Bethlehem as Town Supervisor David VanLuven said that lighting at Town Hall, the highway garage and Elm Avenue Park are changing from over 850 conventional light bulbs to LEDs — the former was done last month.

In a press release, he wrote that Bethlehem was also awarded a $30,000 grant in late December through NYSERDA’s Clean Energy Communities Program to replace one of the town’s aging gas-powered cars with a new electric car for the town’s Building Division and to install a double-port charging EVC station for it in the Town Hall parking lot this summer.

While Cunningham said she hopes the town’s fleet can fully convert to electric vehicles eventually, she said the new electric vehicle and EVC that VanLuven brought up are separate from the five proposed EVCs that she’s working to introduce this spring.

If approved, the five proposed EVCs will be installed at three municipal parking lots for public usage this spring: across the street from the Blue Sky Recording/Music Studios on Adams Street; near the Elm Avenue Park pool complex’s entrance; and at Town Hall — this will be separate from the aforementioned EVC VanLuven brought up.

The five EVCs will be owned by the town, its electrical infrastructure will be owned by National Grid and they will be installed and activated by PlugIn Stations Online, LLC. The latter is an Albany-based company that installs and maintains EVCs throughout the state.

Cunningham said she and several town staff met with Christopher Carmody, the vice president of business development at PlugIn Stations Online, to scout potential EVC locations across town from July to October 2019.

“We went around a lot of potential sites and talked about the pros and cons for each one, how much it would cost to install at each site and more,” Carmody said. He added that municipalities have been “an important customer base” since PlugIn Stations Online opened in 2011 and this has been the second time working with Bethlehem.

When asked why the final three confirmed locations were just within Delmar, Cunningham said, “We did think about South Bethlehem and Selkirk, for example, but for now, it does need to be accessible to the most amount of people. It doesn’t mean we won’t extend it and we could apply for five more next year if we saw a huge need for these. … But again, we’ve got to see the need and at this point, we’ve assumed that being near the densest population of Bethlehem made the most sense for the first [EVCs].”

Carmody said an EVC installation typically consists of one week for electric work and sometimes a few additional weeks for National Grid to come and connect the EVC with a nearby power line.

“I’m just excited about the whole thing and the EVCs transition,” Carmody said. “I’m an environmentalist and we have to do drastic things to do things differently. There’s also a real economic engine as it costs less to operate a car on electricity than on gas. So there’s both environmental and economical benefits.”

According to the U.S. Department of Energy’s Office of Energy Efficiency and Renewable Energy, fueling a vehicle in the U.S. costs $2.57 per (gallon) of regular gasoline but only $1.17 per electric eGallon.

It defines an eGallon as “the cost of fueling a vehicle with electricity compared to a similar vehicle that runs on gasoline.”

“I want to take advantage of these rebates because the money runs out,” Cunningham said. “That’s the thing with rebates and National Grid and NYSERDA have a pot of money that they’re encouraging municipalities to do this… . So that was another sense of urgency for me to act on.”

Students to show their STEAM knowledge