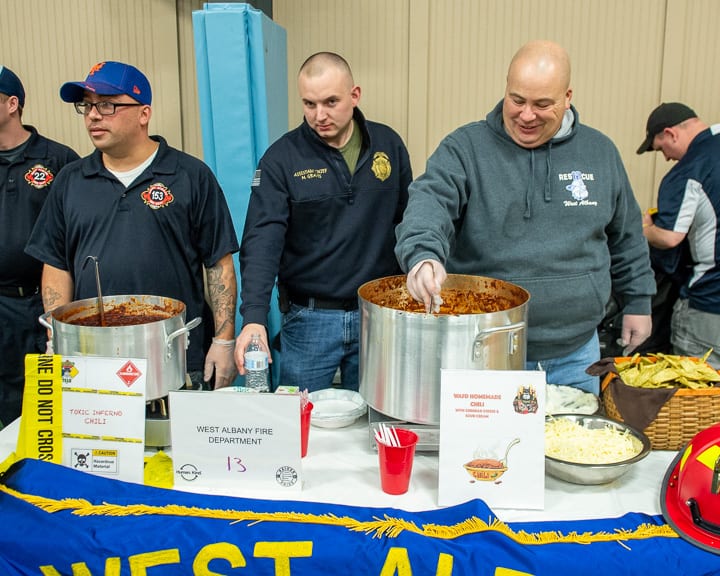 COLONIE — Chili cooked by public safety personnel on a cold Northeast night to help high school students raise money for a good cause.

It really doesn’t get any better than that.

Such was the sixth annual Colonie Raiders Chili Cook Off hosted by the Colonie High School iCARE, which stands for integrity, Community, Accountability, Respect, Empathy.

Each year, the group of altruistic students focus on one charity or cause and Northern Rivers, an organization that provides services to those who struggle with abuse, neglect, trauma, mental health and/or educational difficulties, is this year’s beneficiary.

“It’s a great thing for us. It helps our families and the clients we serve get our services especially if they have a difficult time affording them,” said David Rossetti, the chief officer of behavioral health at Northern Rivers. “You know it’s interesting. When you watch the news, or read the news, it’s usually something bad happening or a catastrophe that has occurred, but when you stand in this room, and see all these orange shirts, and know each one of them is a student at the school and know they are doing this for a good cause, there is really no words for it.”

The iCARE students were wearing orange shirts with the logo “Kind. Human.” on the front. This year the group raised $2,340. Since its inception, it has raised some $80,000 for local charities.

“We are trying to bring the community together and have a fun night, and get our students out to volunteer for a good cause and have some chili and get our first responders out to participate,” said iCARE co-President Colonie High senior Sophie Norton, who wants to be a special education teacher. “It really is a good cause. Mental health is prevalent in our society today and we try to focus on causes that impact teenagers but honestly it is among all people. When it is relevant to our society, it is important to talk about and raise money to help them out.”

Norton has been involved in iCARE for all four years and she said the experience has been invaluable.

“I have learned a lot of new things including leadership skills and to just be a better person. Kinder,” she said. “I’ve learned how to serve those around me which I may not have learned anywhere else.”

“It’s important for students to come together not only as part of the school but as part of the community,” said iCARE co-President Sophie Haas, a Colonie High senior headed to Siena College to study nursing.

The People’s Choice 2020 Chili Cook Off champion this year is Carter’s Crew and the West Albany Fire Department took home the Judges Choice award for the second year in a row.

“This is what education is all about. Putting on a community event with kids are leading the activities. To get them engaged early on in leadership activities like this. What better education is there than that?” said David Perry, the assistant superintendent who was named the new superintendent on the day of the cook off. “For students to be successful they have to a reason to come to school outside of their academics and this is just a precursor to the, becoming successful citizens and it shows the community how wonderful our kids can be.”

PICK of the WEEK: Rock ‘n’ Roll Hall of Famer Denny Laine will play at Skyloft on Thursday

Preparing for the Bethlehem State of the Town Address