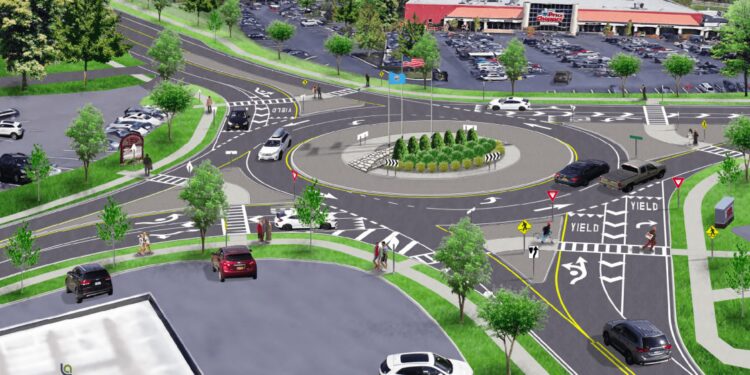 BETHLEHEM — The Albany-based Baker Public Relations firm will work with the town and the Chamber of Commerce over the next three months to develop a strategic communications plan for upcoming roadway construction projects.

The agreement was authorized by Town Supervisor David VanLuven during the Jan. 8 town board meeting. Baker Public Relations would be a consultant to help the town and Chamber of Commerce communicate about the extent and timeline of major construction projects with businesses located near and residents living in areas that will see major construction work, as well provide tools to help businesses communicate with their customers.

The strategic communications plan will focus on the upcoming $4.9 million Glenmont roundabout project. With construction set to start this spring, this will transform the four-way intersection of Feura Bush Road, Glenmont Road and Route 9W into a roundabout. The strategic communications plan would also serve as a template that the town can use with other future projects like the Delaware Avenue Complete Streets and Road Diet Project.

“In hearing feedback from the public about the Delaware Avenue construction work in 2017, there was some concern that the town did not communicate to business owners and residents there as best as they could, like about detours and construction schedules,” said Robert Leslie, the town’s director of planning. “So this effort is in response to that practice. We want to do a better job this time with the Glenmont roundabout project coming up, and we’ll have a consultant assist us and communicate with the people.”

Maureen McGuinness, the Chamber of Commerce’s president, echoed Leslie’s words, saying that town communication with residents and business during the 2017 Delaware Avenue construction work was “poor.”

She continued, “The road work had an impact on people and businesses there, some of which could have been mitigated. It’s very clear something needs to be done differently as the town moves forward.”

With Baker Public Relations, Leslie said under contract, the town is paying the firm $18,000 for its services over three months.

In an email to Spotlight News, Jason Politi, the firm’s public relations and marketing director, wrote that it has had years of prior experience working with municipalities, construction and real estate development. While it has worked with other local municipalities already, this would be the first time working with the town of Bethlehem.

Town staff had sent out a Request for Proposals (RFP) last October to get local potential public relations firms’ attention and received five responses by November. The town’s Strategic Communications Plan Committee — comprising of Leslie; McGuinness; economic development coordinator Elizabeth Staubach; and the supervisor’s executive assistant Robin Nagengast — reviewed them based on each firm’s experience with similar projects, having qualified personnel and their ability to meet the desired three-month schedule.

Leslie said the committee had been set up by the town’s Economic Development & Planning Department last October.

The committee then interviewed three of the five firms and later unanimously voted for Baker Public Relations in December.

“While all three were qualified, we thought Baker [Public Relations] really gives us what we need in terms of communication with businesses and assisting them with tools and ways to communicate with their customers and clients,” Leslie said.

Politi wrote that his firm was notified of the unanimous vote on Dec. 18 and it would later be approved by the town board at the Jan. 8 meeting. “We are very pleased to be selected by the town’s Strategic Communications Plan Committee and grateful for the opportunity,” he wrote. “We put a lot of thought into our proposal and subsequent presentation to the committee. We are excited to get to work and build a relationship with the town.”

Politi added that his firm plans to submit the final strategic communications plan by April 1, which will be available to both the press and public. “We are eager to get underway with this project,” he wrote. “The committee has clearly laid out its expectations for us and we will devote our best efforts to developing this plan.”

Looking ahead, Leslie added that Baker Public Relations will meet with him and the rest of Strategic Communications Plan Committee; Creighton Manning, the Glenmont roundabout project’s engineering consultant; and residents and business owners by mid-February to discuss the anticipated construction schedule. “We’ll have a kickoff meeting which includes a field visit to the intersection to look at the area,” he said. “We’ll also finalize the meeting date for when we meet with business owners.”

Politi wrote that his firm will meet with the Strategic Communications Plan Committee ideally this week, including for the field visit.

He added that a meeting with local business owners near the construction zone will be arranged in the next few weeks.

McGuinness said such discussions should begin as soon as this week already.

“As Chamber president, I’m very pleased that there’ll be strategies in place to communicate with businesses,” she said. “This should help anytime we see roadwork happen in town ahead. The fact that we’re giving tools to businesses is very forward-thinking.”

Leslie concluded, “I think it shows the town is responsive to public comments and concerns regarding construction projects, and this is just one effort. Our goal is to utilize our plan for the Glenmont roundabout project and replicate it for other projects ahead. … One takeaway from this is to limit the disturbance to residents and businesses during a roadway construction project.”