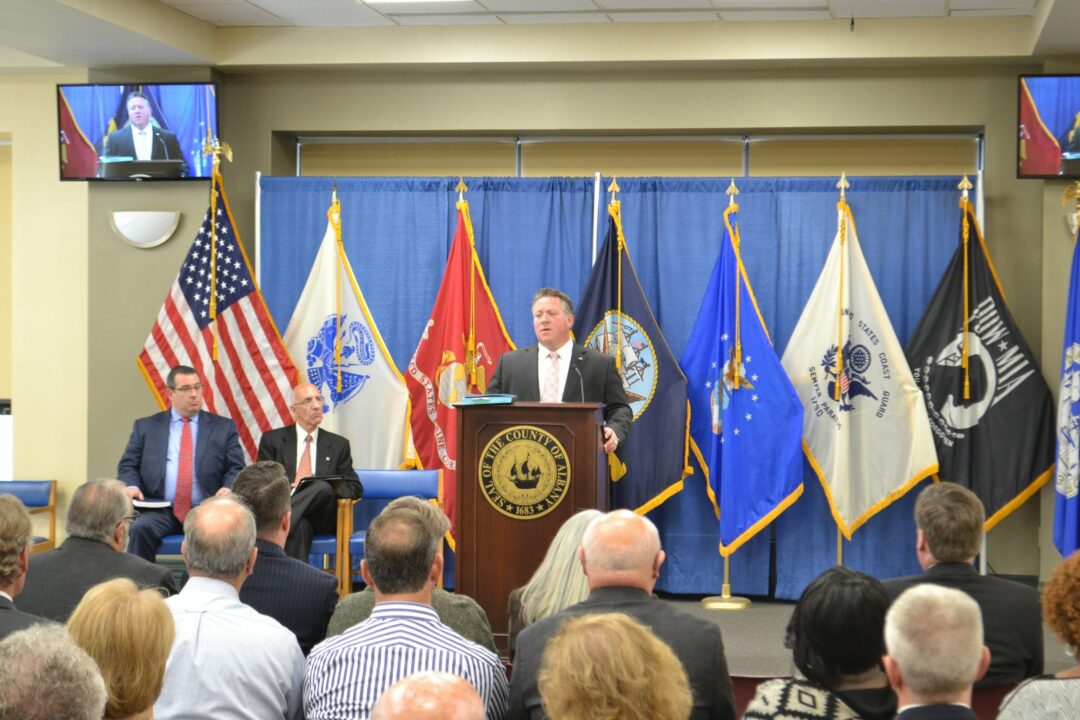 This story was updated to include comments from County Executive Dan McCoy’s office and county Legislator Paul Burgdorf.

If approved by the county Legislature, the tax rate will be $3.51 per $1,000 of assessed value, a 1.3 percent decrease from this year.

Included in the budget are raises for “virtually all employees,” of about 2 percent, according to McCoy, which is in line with the contracts negotiated with unionized employees.

Mary Rozak, a spokesman for McCoy said timing of raises for elected officials are dictated by law.

“The sheriff, comptroller and county executive are only permitted salary increases during the start of the year after which they have been elected,” she said in a statement. “In this case, that means in 2020 and then no salary increase could happen again until 2024.”

She said the district attorney’s salary is required by state law to be equal to or higher than either the county judge or Supreme Court judge in a county.

The Legislature will now review the budget, hold hearings and make any modifications before approving the spending plan.

“Large raises for elected officials and non-union employees are always controversial and the subject of review by the Legislature,” said Legislator Paul Burgdorf, R-Colonie.

This is the second year of the statewide implementation of the Hurrell-Harring indigent legal defense reforms McCoy fought for at the state level. An additional $3.5 million will fund 30 new positions, including those in the Public Defender, Alternative Public Defender and 18-B Departments.

Also included in the budget are:

About 80 percent of the budget is mandated with 60 percent being state or federal mandates for things like social services.

“While we make Albany County a more affordable place to live and work for our families, this budget will allow us to continue the progress being made on the serious challenges they face each day,” McCoy said in a statement. “Those include blight and divestment in underserved communities, social and criminal justice issues, the upcoming 2020 Census, continued economic growth in the region and so much more,” continued McCoy.

Chairman of the Legislature Andrew Joyce said he is happy there is no tax increase but is promising an “aggressive budget review schedule this month.”

“Now that the Legislature has received the budget, it is our job to evaluate at what has been submitted to ensure it’s the best plan for governing efficiently in the upcoming year and beyond,” Joyce said. “The Legislature’s focus this year is to ensure the County is fiscally stable for any potential economic impacts there may be in the near future so we can minimize any additional costs that could be passed on to residents.”

The Audit and Finance Committee will kick off its annual review of the budget on Wednesday Oct. 16, at 5:30 p.m. in Room 730, at the county office building, 112 State St. in Albany. The Committee will meet with the county executive, comptroller, county clerk, district attorney, sheriff, coroners, comptroller and management and budget personnel.

Last year, working in a bipartisan manner, we were able to review the executive’s proposal and improved it, giving a tax cut that was not included in the original budget,” said Republican Leader Frank Mauriello. “We hope to have a detailed review of all revenues and expenditures and look forward to reviewing the budget in detail.

SPOTLIGHT ON BUSINESS: The Spinney wants to expand its ’55-and-better’ community