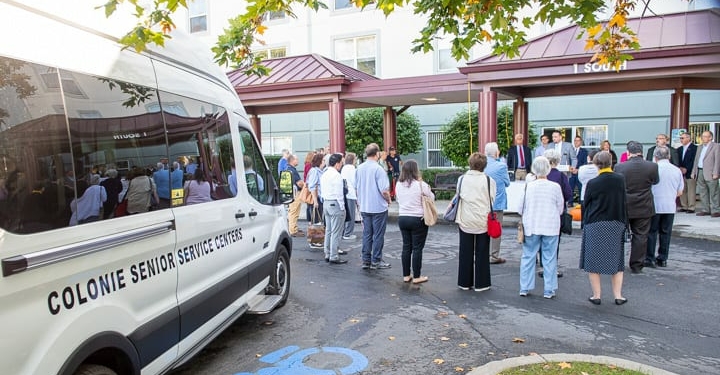 One of the new vans purchased with a grant from the Albany County Legislature.Jim Franco/Spotlight News

COLONIE — It was a big day for the Colonie Senior Service Centers.

It got a $50,000 check from the Albany County Legislature to purchase new buses; it cut the ribbon on sweeping renovations at its flagship facility, the Beltrone Living Center, it celebrated the same complex’s 20th anniversary and it saw three residents recently turn 100 years old.

“It’s just fantastic,” said CSSC Executive Director Diane LaCivita. “We are so grateful to the county for the grant and the town for its continued support in helping us fulfill our mission.”

While CSSC is headquartered in Colonie, it serves seniors in Albany, Saratoga, Schenectady and Rensselaer counties. The vans are of particular import since mobility is a major concern among many seniors. CSSC will give some 25,000 seniors a ride this year and the number is steadily increasing.

“Sixty-eight percent of my district is seniors and many of them are homebound and in need of transportation,” said Legislator Joe O’Brien, D-Colonie, who helped secure the grant. “Finally Colonie is being recognized for the great services it provides to seniors throughout Albany County.”

A portion of the $50,000, about $30,000, was used to purchase a new van with a wheelchair lift. The remaining $20,000 is being used to leverage as much as $80,000 more in grants and other sources of funding and so far a second van was purchased with a third in the not-to-distant future.

“Thirty-eight percent of Albany County’s senior population lives in the Town of Colonie and in my travels, going door-to-door, I see people unsure how they will get to the doctors or to the market so the services CSSC provides is just phenomenal,” said Legislator Paul Burgdorf, R-Colonie, who was on the Town Board when the Beltrone Center was just an idea. “Being here today to help deliver this check and celebrate its 20th anniversary is just fantastic. Probably one of the most satisfying things I’ve done on the Legislature.”

Andrew Joyce, chairman of the Legislature, who presented the check to LaCivita, said the demand for senior transportation increases each year.

“We are happy to provide this funding to help CSSC replace its aging fleet with new vehicle to continue to meet that demand safely,” he said. “We on the Albany County Legislature are doing the best we can at what we are supposed to be doing and that is taking care of the people who need our help the most.”

The CSSC Transportation Services has given elderly and disabled elderly residents of the four-county region a way to get to medical appointments, congregate nutrition sites, Adult Day Services, the pharmacy, social activities, run errands and/or make appointments.

The Beltrone Center at 6 Winners Circle has 250 apartments for those 55 and older. The units are not market rate but based on income. The renovations included a number of improvements to the building’s first floor which is used for a host of activities — from meals to concerts to speakers to dance classes — and is open to the public.