A Stewart’s gets the OK in Colonie 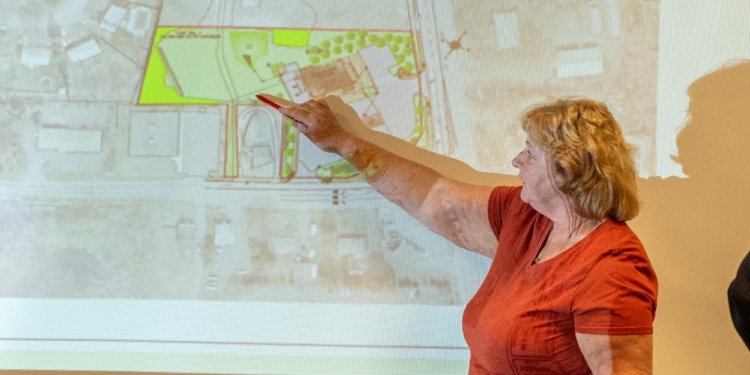 Paula Catellier, a resident of Castle Court, speaks to the Planning Board about the project to build a bigger Stewart’s in her neighborhood. Jim Franco / Spotlight News

COLONIE — After nearly three years, the Planning Board, on Tuesday, Aug. 27 granted final site plan approval to Stewart’s to upgrade their store at the intersection of Albany Shaker and Everett roads.

After a meeting with Albany County to work out how best to deal with the busy Albany Shaker Road, it was determined that, at least for the time being, there would be no left hand turns into the Stewart’s parking lot from Albany Shaker Road.

When, at an unknown future date, the reconfiguration of Albany Shaker Road is complete that may change. Albany County, which owns Albany Shaker Road, is undergoing a process to help traffic along by taking a one of the two lanes heading east and west and make it a left hand turn lane from the traffic light at the intersection of Everett and Albany Shaker to at least Green Meadows Lane.

That process will include re-striping the road, reconfiguring the traffic light and add amenities to make the area more pedestrian friendly. Stewart’s has agreed to contribute $30,000 to that cause.

Just two neighbors spoke during the public hearing portion of the meeting. Paula Catellier, who lives behind the Stewart’s on Castle Court, asked if trees could be planted between her home and the shop to help buffer car headlights and other activities. An attorney for Stewart’s, Paul Goldman, said that would not be a problem.

He also said the company would agree to plant trees or shrubs on the front lawn of the resident living directly across Everett Road from Stewart’s driveway to achieve the same objective.

Planning Board Chairman Peter Stuto asked Stewart’s to submit a detailed landscaping plan to the board and reserved the right to bring them back if it was unacceptable.

Mary Ann Morgan, who lives on Green Meadows Lane, said she is concerned the new Stewart’s will have lights similar to the Berkshire Bank, located across Albany Shaker Road from the Stewart’s and that shine in her windows.

“Despite the difficulty getting across the road sometimes, that’s where we go for mile and ice cream,” she said. “I’m glad the store is there but I would like to see it be a good neighbor and not impinge on my way of life with more lights.”

Joe Grasso, of CHA Consulting and the town’s designated engineer on the project said banks have a different standard when it comes to lighting their parking lots. Basically, a bank is required to have 50-foot candles — a way to measure the light shone from a light post at ground level — around the banking perimeter while a typical parking lot has one- to two-foot candles, which is what Stewart’s will install.

Under the fueling station canopy, the number of foot candles will be upwards towards 20, he said, but they will be recessed to concentrate the light on the pumps and the customers rather than have it illuminate a wide area of space.

Also, he said, the town requires light posts be not more than 18-foot high and the ones proposed for Stewart’s will be 15-foot posts. Atop the posts the lights themselves will be, “dark sky friendly,” or designed to focus the light downward onto the parking lot rather than intrude on neighbors.

The lights are on a timer and will be on a half hour before the store opens at 4:30 a.m. and a half hour after it closes at 11 p.m., said Chris Potter, a representative from Stewart’s.

“We are addressing the concerns about lighting to the best of our ability,” Grasso said.

Planning Board member Susan Milstein was concerned about deliveries. Potter said trucks carrying merchandise and fuel will only come while the store is open, but could not say exactly when they will be at that particular store.

There were two waivers granted: one to exceed the 25-foot setback from Albany Shaker Road and Everett Road and to have parking and drive ways and fuel pumps on the front yard.

Traffic would increase by about 21 trips, based on the increased size of the building, during the afternoon peak travel time.

When first proposed in October 2016, said Nick Costa, of Advanced

Other changes include pushing the access drive on Albany Shaker Road some 50 foot to the west to help alleviate traffic congestion at the intersection with Everett Road.

It is unclear when the old Stewart’s will be demolished or when construction will start. In November, the Planning Board granted the company permission to demolish the existing Fuller Road House on Fuller Road and build a new store between Katherine and Pinehurst roads. The building is leveled but construction has not started. Stewart’s has a shop, unique in that it is incorporated into an office building, about a quarter mile from Central Avenue that remains open.

Neighborhood parents on watch in Glenmont