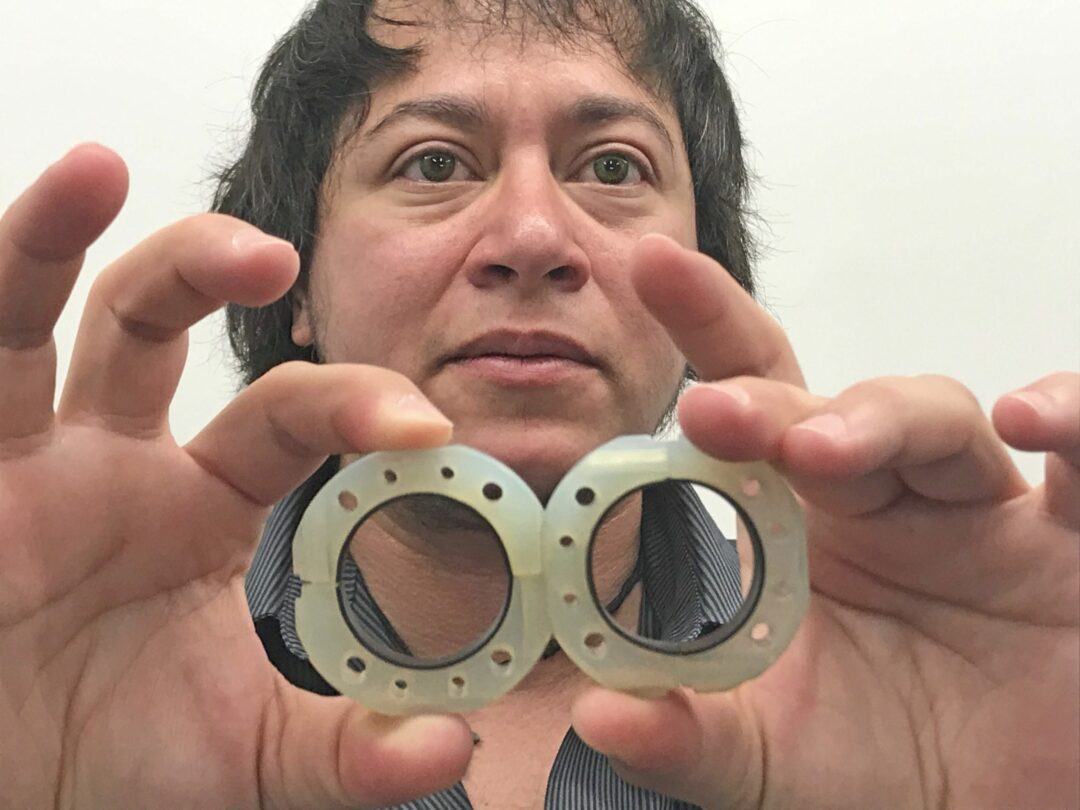 Daryian Rhysing holds up a model of his thermoplastic wire fastener which is catching the attention of commerical airlines and the U.S. military. Photo by Michael Hallisey / TheSpot518

TROY — Anyone who has had to step onto an airplane can appreciate the acute attention placed upon everything that goes on it, specifically its weight.

Weight is a factor within a complex equation that determines whether or not a passenger jet can leave the ground. When considering a Boeing 767 is nearly 400,000 pounds on its own, a defiant commuter will argue over a few more to avoid parting with his luggage. But, explaining away the airline’s policy would require a pad, some paper, a slide rule and a few semesters at Rensselaer. Suffice it to say, it’s science.

So, science is applied towards the smallest of endeavors at United Aircraft Technologies, Inc. in Troy. Daryian and Evaguel Rhysing lead an upstart out of the Tech Valley Center of Gravity that has designed an inter-connecting clamp that could prolong the use of the military’s strongest workhorse.

Daryian Rhysing, chief technology officer and executive chairman of UAT, spent 12 years as an aircraft mechanic for the U.S. Army and as a hull technician in the U.S. Navy. He developed Carpal Tunnel Syndrome from the countless hours spent on maintaining and fixing the wiring in the aircraft. Later, while attending Rensselaer to earn his bachelor’s degree, Daryian developed his business concept. A clamp.

Think of the wiring behind your television and all its various wires. Your cable, the HDMI cords for each of your gaming systems and the power cords for everything on your television stand — it’s either left unkempt or you ziptied it all into a uniformed look. Now, step out of your living room and imagine climbing into the cockpit of a Sikorsky Blackhawk helicopter. Behind each of its gauges are wires strung throughout its fuselage and held in place by a thousand clamps.

Daryian’s thermoplastic wire fastener is designed to reduce weight and simplify maintenance. It would reduce the weight of a Blackhawk by 50 pounds. He said that kind of weight reduction would introduce more technology into a helicopter used for a wide variety of purposes.

Through a three-year agreement with Sikorsky, the Rhysings meet

with Sikorsky engineers bi-weekly in order to ensure their design stays within the needs of the U.S. military. In Troy, UAT uses 3D and augmented reality in lieu of parking a 20,000-pound helicopter on 3rd Street.

“They are modernizing their aircraft, so they want to bring on more technology,” said Daryian. “If we take off 50 pounds, they can bring new technology beyond what we have today.”

Since it first launched 40 years ago, the U.S. Army’s Blackhawk fleet has more than 10 million hours of service. It is commonly used for transport, rescue, firefighting and combat. Despite the age of its design, Sikorsky is still under contract to build more for the U.S. military. The Rhysings did not specifically name the type of technology Sikorsky is planning, but the Lockheed Martin company announced late last year that it is preparing to equip its helicopter with the ability to fly autonomously.

Using what Sikorsky has named its MATRIX Technology, it will allow the military to perform missions with “two, one or zero crew members,” according to its website. While celebrating the helicopter’s 40 years in service, Sikorsky announced it expected to see Blackhawks flying for another 50 years.

“We are committed to the U.S. Army – and all other [Blackhawk] operators – and look forward to continued partnerships on the Black Hawk program in the years to come,” said Dana Fiatarone, Sikorsky vice president of Army and Air Force Systems. “It is our priority to

continue fulfilling current and future requirements in order to meet the needs of operational units both today and tomorrow.”

In addition to the military’s interest in Daryian’s clamp, commercial airlines could use it in the effort to reduce its carbon emissions. Retrofitting an Airbus A380 with UAT’s clamp would slash 600 pounds from the world’s largest passenger airliner. That won’t allow for more carry-on luggage, but the weight reduction would help fuel efficiency and reduce carbon emissions, said Daryian.

Daryian’s thermoplastic wire fastener is still in development. Through assistance from the Center of Economic Growth’s Business Growth Service group and regional Manufacturing Extension Partnership, UAT and CEG have secured more than $40,000 from the FuzeHub Jeff Lawrence Innovation Fund to facilitate its commercialization.

“The Capital Region has been beneficial in fostering entrepreneurship,” said Evaguel Rhysing, chief executive officer of UAT. “It’s sometimes not easy. To say, I have this thing and I’m going to sell it to the government. It’s a big task.”