Remembering 50 years since humans first stepped on the Moon 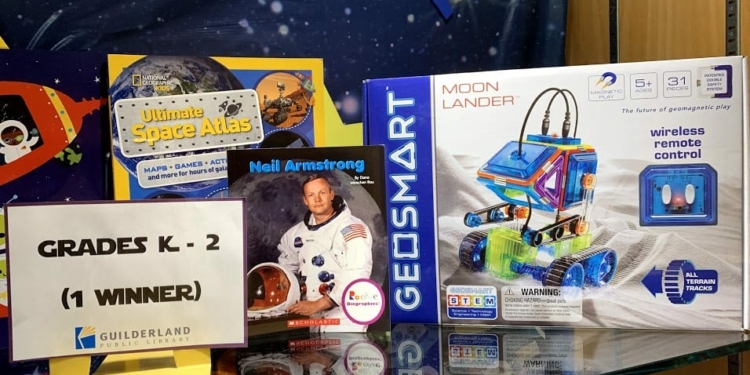 GUILDERLAND — When Apollo 11 landed on the Moon back on July 20, 1969, millions of people watched in awe as television helped broadcast the moment when a centuries-long dream became a reality. As people looked up to the sky with wonder, they had also looked up when Apollo 11 first launched prior on July 16, a metaphor for how mankind’s reach transcended celestial boundaries.

A similar phenomenon happened this past Saturday, July 20 — the 50th anniversary of Apollo 11’s Moon landing — at the Guilderland Public Library where a mostly-packed audience peered up as a projector screened a documentary film about the historic event. Aptly titled “Apollo 11” and directed by Todd Douglas Miller, the film was released in theatres in the spring and consisted of archival footage as well as never-before-seen material.

People were now more able to intimately witness the astronauts board the spacecraft, engineers work feverishly in the launch control room, the frenzied media coverage and the public intrigue at the time. Regarding the latter point, the film offered a first-person view of the massive crowds gathered near the launch pad site, and the fashion and technology of the late 1960s.

Presented in color and assuming the perspectives of the astronauts, engineers and public then, the film felt like a well-packaged time capsule. It felt quite surreal to watch Neil Armstrong, Michael Collins and Buzz Aldrin up close in such high definition in the film.

Maria Buhl, head of programming at the Guilderland Public Library, said that the library secured the rights to screen the documentary due to an annual contract and an additional one-time screening licence with Movie Licensing USA. Provided with free popcorn and iced water, the audience that day was mainly a mix of young families with awestruck children and older folks, some of whom were alive when the actual mission happened in 1969.

Buhl, who was eight years old at the time, said, “I remember everyone talking about it and asking where you’ll watch it. It was amazing and newspapers had nothing but coverage on it with huge headlines. In fact, the family who lived down the street from us had a dog that had three puppies named after the astronauts. That showed how people were so obsessed with this back then.” She added that due to her young age, she did not fully realize the significance of the Space Race between the U.S. and Soviet Union then but she acknowledged that Apollo 11’s success “really displayed a sense of U.S. pride.”

The “Apollo 11” screening was a part of Guilderland Public Library’s “A Universe of Stories” theme which promoted space-related books, activities and events, partially to commemorate Apollo 11’s 50th anniversary. Buhl said it was important for children and generations who were not alive in 1969 to acknowledge how “Apollo 11 was probably one of the most defining moments for mankind and U.S. history. I think it’s a good thing to remind kids that this was a tremendous accomplishment and it was also wonderful to see more recent missions including women. Women scientists working at NASA were fundamental too.”

Speaking of younger generations, there has been a visible fashion trend this year among teenagers and young adults to wear outer space-, moon- or NASA-themed clothes and accessories. Examples include shirts and face masks bearing NASA’s famous “worm” logo, and sweatshirts and silver bomber jackets with NASA’s navy blue insignia on its back.

The Los Angeles Times reported on Friday, July 19 in its “The NASA logo is having a moment” article that NASA-themed fashion provides a sense of nostalgia and indirectly promotes public intrigue in the STEM fields — science, technology, engineering and math.

In pop culture, singer Ariana Grande’s 2019 album, “Thank U, Next” included a song named “NASA,” which has become a fan favorite and inspired her own line of NASA-themed merch for her world tour and Coachella performances earlier this year. Also, the recent “Toy Story 4” film includes the return of Buzz Lightyear, a fictional toy Space Ranger whose first name was borrowed from Apollo 11 member Buzz Aldrin too.

Furthermore, social media is now rampant with Area 51-related memes and jokes, stemming from a viral Facebook group event page called “Storm Area 51, They Can’t Stop All of Us.” That event page has jokingly attracted over one million people to want to storm Area 51, an elusive military site in southern Nevada. The U.S. military has actually caught wind of the viral sensation and cautioned the public to not actually approach Area 51.

A July 15 article in The New York Times called “Storm Area 51? It’s a Joke, but the Air Force is Concerned” included a quote from an Air Force spokeswoman who said that “any attempt to illegally access military installations or military training areas is dangerous.” While Area 51 is not connected to NASA or Apollo 11, it has renewed public interest in similar nostalgic topics like outer space and alien-related conspiracy theories.

All these factors further drive up interest in NASA among younger generations and perhaps astronauts and aliens will be among the most popular costumes this Halloween season.

When asked if she has seen many young people sporting NASA-inspired clothing, Buhl said, “I personally have not seen it but we do have T-shirts from the Universe of Stories theme in the library. But that’s cool that there’s such an interest from young people.”

Looking ahead, Buhl said the library is continuing with its Universe of Stories theme with more space-related activities and events through the end of July. “Apollo 11 still is remarkable today and the people who worked at NASA and the astronauts all showed incredible bravery,” Buhl said. “The library is still having events like a Jedi Academy, a learn-to-use a telescope program and a talk about stargazing. It’s all endless themes.”

For more information on events and times, visit guilderlandlibrary.org.