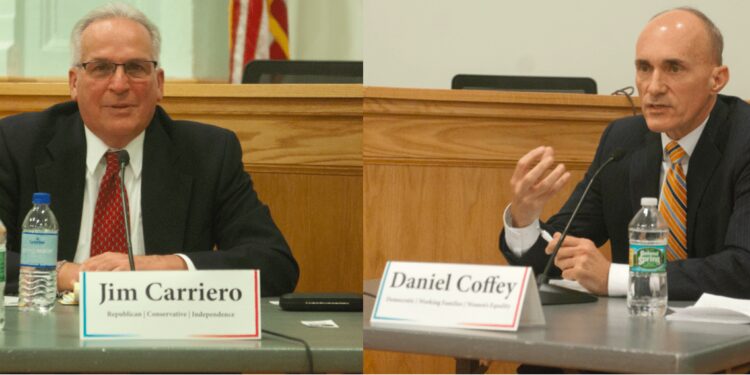 The two Town Board candidates used the Oct. 30 forum as another opportunity to inform the public about their platforms and perspectives on town issues. Diego Cagara / Spotlight News

BETHLEHEM — The two Town Board candidates came for a two-hour forum at Town Hall and debated on numerous issues on Tuesday, Oct. 30 at 7 p.m.

Seated opposite each other, Jim Carriero was to the left, running on the Republican, Conservative and Independence lines. Dan Coffey was to the right, running on the Democratic, Working Families and Women’s Equality lines. The forum was greeted with a fully-packed audience who further learned what each candidate’s opinions and ideas were.

The forum, organized by the Bethlehem Chamber of Commerce and Spotlight News, was moderated by the latter’s managing editor Michael Hallisey and publisher John McIntyre. They read out almost two dozen questions which asked the candidates about their opinions and allowed them to give rebuttals to let them respond to each other.

Below are YouTube videos that filmed the entire forum in two parts:

The following is a gallery of photographs taken during the forum.