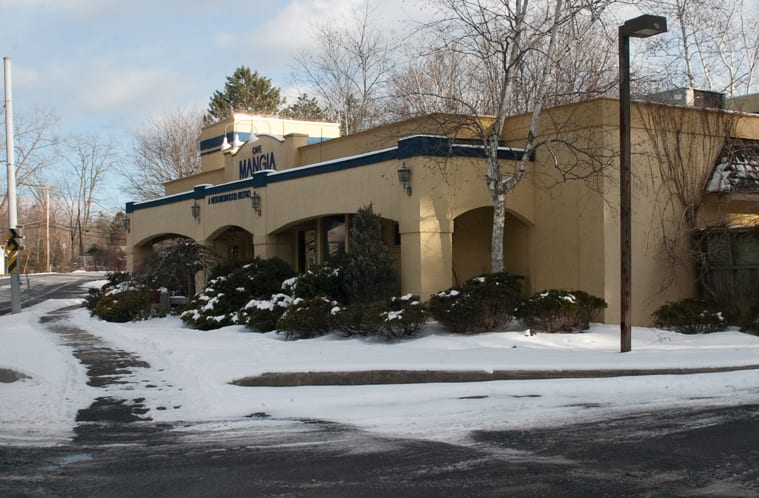 A proposed residential complex for behind the old Slingerlands Mangia has residents upset it will disrupt historic family vault in which postmaster and civil engineer William Henry Slingerland, and his brother Whig Congressman John I. Slingerland (above) are buried. Spotlight file photo

SLINGERLANDS — Over two dozen local residents appeared at the Oct. 16 Planning Board meeting at Town Hall to voice their opposition to the proposed three apartment buildings to be built by the intersection of New Scotland Road and Kenwood Avenue in Slingerlands. The Planning Board members themselves also expressed concern about the planned buildings’ potentially negative impact on the surrounding community there.

The proposal also acknowledged that part of the property “includes an area of land that measures 80’ x 60’ that is owned by the Town of Bethlehem and is the historic Slingerlands Family Burial Vault.” Built in 1852, this vault is the final resting place for numerous notable figures within the prominent Slingerland family, including postmaster and civil engineer William Henry Slingerland and his brother John I. Slingerland, a congressman who was against slavery. The vault’s infrastructure has deteriorated through the years though, despite its historical significance.

Before Albany real estate agency Tri Capital Realty, LLC would give an initial presentation to the board about the proposed project, a dozen local residents spoke up at the board, mainly raising concerns that the apartments would not aesthetically look cohesive with the surrounding area, are too physically close to the Slingerlands Historical District and Family Burial Vault, are too physically big to fit into its projected site, and would lead to potential increase in the area’s traffic.

Bethlehem’s town historian Susan Leath, who noted this was the first time in 11 years that she has spoken about an issue at a Planning Board meeting, said that this project proposal did not take into account of the aforementioned concerns before the night’s presentation, as it had been developing prior.

“It’s a lack of respect,” she said. “I try as a historian to respect property owners and their ability to develop, I recognize that. … I just worry that [residents] won’t be listened to and that this developer is just trying to cram in as much as they can.”

The public commentary grew heated a few times as more residents voiced their input, and Planning Board Chairman John Smolinksy and fellow board member Brian Gyory had to reassure the public that the night was to feature just an initial presentation on the developer’s part and that nothing is being approved yet.

After the public commentary, the real estate agency presented the proposal, and received negative responses from the board who generally believed it indeed would not connect with the area aesthetics-wise, its buildings should be reduced in size, and the complex’s appearance from the street would disappointingly be that of a side wall, instead of a front-facing building.

The board suggested to the developer to consult an extra architect who can offer insight on the area’s history and better address how the site may negatively affect the Slingerlands family vault. Such an architect would have to be paid for by the developer, not the board though. Gyory and fellow board member Kate Powers mutually agreed that this should be “mandatory.”

While board member Margaret Sherman added that reducing the buildings’ sizes is “critical” to look more compatible with the surrounding neighborhood, “I would hope that we could get the expertise of an architect who is familiar with infill construction or new construction in historic districts to give us some advice on a design that could possibly be acceptable here.”

Robert Leslie, Bethlehem’s Planning Division director attended the meeting and encouraged the public to also direct any comments or concerns they have to the developer. He also stressed that the planning staff does not advocate for any project and only reviews it in accordance to the zoning law.

The meeting concluded with the board members tasking the developer to revise its proposal and take into account the comments made by them and the public.