Debate over fire department’s proposed electronic board sign rages on 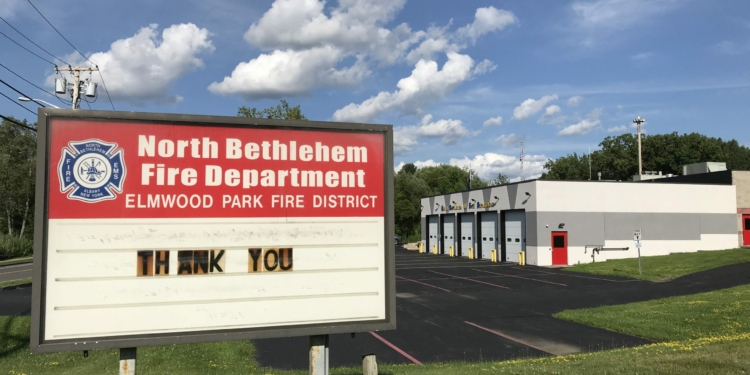 NORTH BETHLEHEM — The Zoning Board of Appeals once again deliberated on July 18 over the introduction of an oversized electronic board sign that would serve the Elmwood Park Fire District and North Bethlehem Fire Department, which previously was brought up during the June 20 board meeting.

Located on 589 Russell Road in Albany, the fire department hopes to replace its current 30-year-old sign. For now, its messages can only be changed manually, something that is perceived as being unsafe, time-wasted and too old-fashioned.

The potential electronic sign was argued by the fire department to be more efficient, informative and keeping in time with modern technology. It could also be used to easily display more event information, messages, public service announcements, the number of annual emergency calls to the fire department and most importantly, traffic alerts.

While initially sounding helpful for the local community, a main issue is the electronic sign’s dimension; it would stand at 8.5 feet high and occupy an area of 42 square feet. This would be 2.5 feet taller than the permitted 6 feet limit and 32 square feet larger than the allowed 10 square feet.

These permitted dimensions are under the Town Zoning regulations for Signs under VI, Section 128-59E, which aim to oversee all manners of Bethlehem signs. They have guidelines online that publicly show how they determine signs’ effectiveness, ease of visibility by drivers, preservation of the surrounding nature, and their aesthetic appearance within the community. In this case, it concerns the latter two as the sign would be oversized and its electronic means contrasts from Bethlehem’s natural surroundings.

Attorney William Young reappeared for the July 18 meeting to represent the Bethlehem volunteer fire service, after having also appeared to speak during the June 20 meeting. While he appeared alone on July 18, he had been accompanied by Commissioner John Mahoney and Fire Commissioner Richard Maura on June 20. All three spoke in defense of the proposed electronic sign, on behalf of the North Bethlehem Fire District.

On July 18, Young reaffirmed his support for the electronic sign despite its violation of the town’s Signs regulations, and how it would genuinely benefit the local community.

“Thirty years ago, [the North Bethlehem Fire Department] moved from their former site to its present location on Russell Road … Shortly thereafter, they constructed a sign,” he said. “That sign is lit and that sign has served the fire department well for 30 years. But now it’s past its time and what we’re seeking to do is to replace that sign with another sign.”

He also told an anecdote about how right before speaking to the ZBA board members, he noticed a picture of a firefighter “handing a small child to a woman” beside the ZBA’s bulletin board outside.

“That’s the people I’m here representing: the volunteer fire service in this town of Bethlehem, the North Elmwood Fire District and the North Bethlehem Fire Department,” he said, conveying how moved he was upon seeing the picture. “In your deliberating process, if you would take that into consideration, that would be very much appreciated.”

Conversely, John Googas, a local resident, submitted a letter regarding the electronic sign’s debate on June 11 to Kathleen Reid, the Planning and Building assistant for the Bethlehem Planning Division and the Zoning Board secretary. However, he was not present at the July 18 ZBA meeting.

Citing that the oversized electronic sign is “certainly inconsistent with the nature and character of the North Bethlehem area,” he wrote that its “size and lighting would be more of a distraction to motorists [than] a benefit to pedestrians and others in the immediate area.”

He also appreciated how the ZBA considered locals’ opinions on this matter but noted that Bethlehem is becoming too overly-developed recently, and this electronic sign would feed into that movement.

However, a positive letter came from Thomas Coffey, a Slingerlands resident, who was unable to attend the July 18 meeting. He had met with local neighbors and learned they were concerned about public safety and the fire department’s response time for emergencies too.

He believed that the electronic sign “will greatly enhance our community in being connected to the needs/concerns of our neighborhoods…[and] will greatly improve our communication network with our North Bethlehem community.”

Furthermore, he strongly appreciated the local firefighters for greatly serving the community and the sign would “keep all of us informed and our families safe.”

Despite the divisive reactions to the electronic sign proposal, the ZBA had encouraged the fire department to find alternative sign designs that would meet the town’s Signs regulations back on June 20.

It concluded by voting to defer the case on July 18 and wait until the Albany County Planning Board makes a determination, hence still leaving the debate open for now.