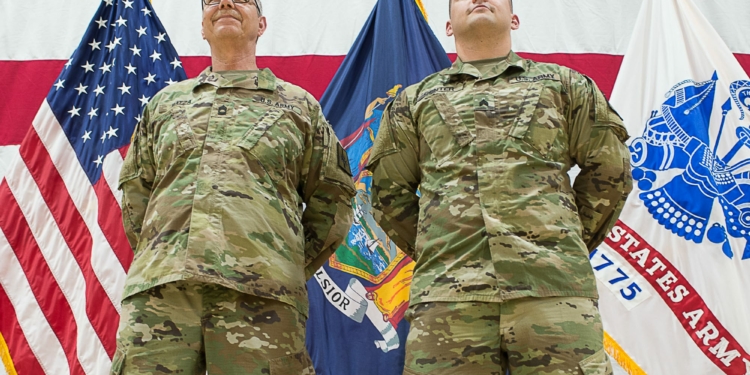 COLONIE — The U.S. Army turned 243 on Thursday, June 14 and while there was not enough room on the cake for candles in those numbers, the New York National Guard did celebrate the milestone with a traditional cake-cutting ceremony.

Maj. Gen. Raymond Shields, commander of the New York Army National Guard, said the guard has hundreds of soldiers stationed in countries around the world including Afghanistan, Iraq, Syria, South Africa and many other countries “pivotal to our national security.”

But, he said, while a strong economy is a good thing, it does hurt recruitment and retention efforts.

“For the first time in many years we recently fell below 10,000 assigned soldiers,” he said. “We have made strength maintenance our number one priority and have devoted significant resources to that effort.”

The party on Thursday, though, was a nod to the U.S. Army and In attendance at the state Division of Military and Naval Affairs Headquarters at the end of Wade Road were the oldest and youngest soldiers in the New York National Guard – 58-year-old Master Sgt. John Batza of Watervliet and 24-year-old Sgt. Tyler Center from Slingerlands.

Batza swerved in the Army from 1980 to 1985 and joined the National Guard in 1991. He serves as a personnel specialist in the New York National Guard’s military personnel office at the Watervliet Arsenal.

Center, who grew up in Rotterdam, enlisted in the National Guard in 2014 and is a supply specialist assigned to New York Army National Guard headquarters.

The youngest soldier represents the future of the Army while the oldest represents continuity with the Army’s history.

“It seemed like the better route. I was working as an electrician and it wasn’t working out for me,” Center said, adding his uncle is in the military. “I always wanted to do it, so I signed the papers and here I am.”

It was on June 14, 1775, that the Second Continental Congress established an army to fight in the American Revolution, said Maj. Brendan Rowe during the ceremony. Essentially, the U.S. Army was formed a year before the creation of the country it defends.

This is year is also the 100th anniversary of the end of World War I, Rowe said.

“While the Continental Army secured our freedom,” he said, “it was the Doughboys of World War I who secured our place on the world’s stage.”

That is why, he said, the theme of this year’s birthday is “Over there. A

celebration of Army history from World War I to the present day.” There were more than 500,000 soldiers from New York fighting in WWI, or 12.5 percent of the total U.S. force or four million.

“The men and women who come before us from across the nation, from every walk in life, from every religious and ethnic background, are the best our nation has to offer,” he said. “And they carry on an important, hard-fought legacy, one of service and sacrifice, paid for in blood and treasure.”

To enlist in the New York National Guard an applicant must be between 17 and 35, a U.S. citizen of permanent residents, at least a junior in high school or have a high school diploma or GED, pass a written test and meet “medical, physical and moral requirements.”

The National Guard perform state and national duties such as emergency response to natural disasters and some are deployed overseas.