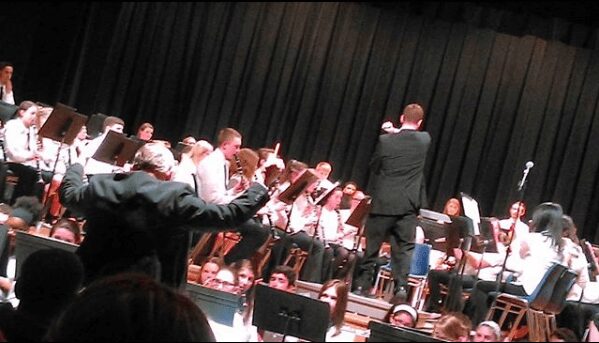 COEYMANS — For the music teachers at Ravena-Coeymans-Selkirk High School, the national award they recently received validates a mission that’s been years in the making.

The district as a whole has been recognized by the National Association of Music Merchants (NAMM) Foundation as a “best community for music education.”  The organization’s Support Music Merit Award is bestowed upon communities where music is valued and taught well with the resources it has.

According to its website, the NAMM Foundation represents the generosity and philanthropy of the music products industry. Established in 2006, it’s funded through trade association activities and donations. The foundation also supports research projects that explore the impact of music making, aiming to promote research that provides information about the benefits of making music at every age.

“This confirms something that everyone [here] already knew,” band teacher John Fatuzzo said. “We’ve always known we had something good going on here, but now we have something to prove it, something to nod to.”

“We have such an active program,” she said. “This is a stamp of approval for not only us and the students who participate, but for the community which continues to support us in every way.”

McLoughlin added the award is not just a collaborative effort of the district’s current music staff; it also acknowledges the work of both her and Fatuzzo’s predecessors whose contributions have made the program what it is today.

“This would not have been possible if we didn’t have such great colleagues before us who worked to make the program so well received and recognized,” she explained. “Even the staff here who support the students in coming to music lessons and those who provide support behind the scenes; it’s a huge group effort.”

This is the first time the district has received the honor, which is awarded on an annual basis. The teachers decided to pursue the application process after Superintendent Brian Bailey sent them an email with the NAMM logo and simply typed, “I want one of these.”

“I knew right there and then we were finally going to take the plunge and [apply],” she said.

She and Fatuzzo spent several hours over a matter of weeks completing the application, adding that all of the information had to be gathered before it could be submitted; NAMM does not allow award applicants to submit partial applications.

“NAMM wanted to know how we utilized the resources we had, regardless of how much money we were given,” Fatuzzo said. “It’s not about having the biggest budget or the best equipment.”

“I had most of the resources already,” McLoughlin said. “I did have to contact some other district resources for some percentages and figures, but a lot of the information about what the four schools offer was readily available to me.”

Bailey is proud of his students’ accomplishments and the district’s recognition, he said in an emailed statement.

“The NAMM award for being one of the 583 Best Communities for Music Education in the United States comes to RCS on the tail end of a year’s worth of noteworthy musical accomplishments by our staff and students,” he wrote. “This year marked our acceptance to participate in music festivals with the Suburban Council schools, gold and silver NYSSMA medals for our performing ensembles, an excellent production of ‘Sister Act’ with multiple regional awards for our cast members, and concert after concert that demonstrated the virtuosity and vibrancy of our music program. RCS could not be prouder of the ongoing accomplishments of our musicians.”

How do the students feel?

The students are thrilled that their achievements are being recognized, McLoughlin said, adding they have been getting a lot of good news lately.

“Before the award, the high school was accepted into the Suburban Council Music Festival, which is basically another festival like All County and All State where [the students] can go and compete for scores,” she said. “This organization is filled with bigger schools [that] have intensive music programs, so we are finally showing what RCS has to offer.”

The music program’s recent advancements and recognition have encouraged both Fatuzzo and McLoughlin to stay true to its tried and tested methods.

“It’s just that stamp of approval,”  McLoughlin reiterated. “We are going to move forward and hopefully bring some new faces in.”

According to current rosters for the 2018-19 school year, McLoughlin will have 136 students, the most she’s had since she started teaching at the high school.

“There are 115 students currently showing up on full chorus days,” McLoughlin said, citing the school’s every-other-day scheduling system. “This is the biggest I’ve had.”

Fatuzzo added his band is sitting at 76 players and no longer fits on the auditorium stage, where it rehearses and performs, comfortably.

“We hope this award will encourage those who haven’t come to see a concert or a drama production to take a seat and hear what we can do,” he said. He also hopes the award will attract prospective teachers to the district when positions open up.

“We have a great program here with such qualified teachers and caring staff,” McLoughlin said, adding she, too, hopes that the award will entice future faculty members who want to be a part of the community to apply.

“The reason why we believe this is so successful is not just because music is known to boost test scores and be such a beneficial part of education,” she continued, “but because this is a space where all of our students can come and be truly, totally themselves without judgment. We want to provide a safe space and an open dialogue with each and every student we have, and I think they know that.”

“Music education teaches discipline, organization and critical thinking in ways that can carry over to the classroom and vice versa,” he said. “It’s a group effort.”

Bored. Seriously?! A free and fun summer in the 518

Poll has good news for Gov. Cuomo and Sen. Gillibrand; not bad news for Pres. Trump