by Michael Hallisey
in Business, News, Pop Culture, The Spot
0 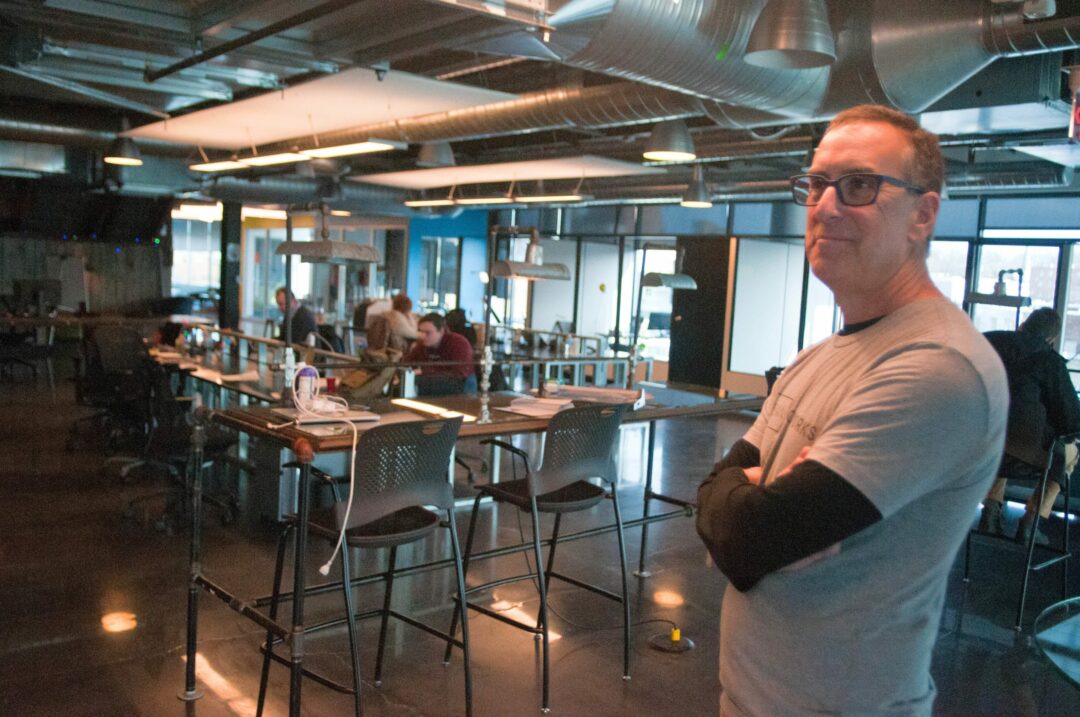 SCHENECTADY — What’s in a name change?

When the Schenectady-based collaborative workspace Electric City Innovation Center changed its name to Urban Co-Works last month, it signified that the brand’s focus was broadening.

Urban Co-Works CEO Jeff Goronkin said the old name no longer suited his plans for the shared work environment he took over last year. The homage to the Schenectady nickname was fitting for the office space located directly across State Street from Proctors. But, he said, it didn’t aptly describe what happens there.

“Because, nobody knows what that is.” he said.

In 2018, the shared space concept can no longer be considered a trend. It is, in fact, a full-fledged industry patronized predominately by start-ups looking to curb costs while still maintaining a professional environment for clients.

Bonnie Liebers is one of 1.2 million professionals worldwide who are estimated to have worked in a shared office space in 2017. The owner and CEO of Genetic Counseling Services moved into Urban Co-Works late last year.

Liebers’ story is a familiar one. Her company, too, is a start-up; one she created after working 30 years in the genetic counseling field. Much of that time was spent in offices provided by local hospitals. She acts as an intermediary between her clients and medical professionals and helps them with accessing needs for genetic testing.

With hospitals, Liebers said she often found herself on the wrong end of budget cuts. But, with the demand for genetic testing on the rise — 10 million people have sought a genetic test, roughly 2 million through Ancestry.com on Black Friday, alone — it’s enabling Liebers to branch out on her own. Just doing so from home with the dog barking during phone calls, was not the solution.

Through a membership fee less than the monthly rent for a two-bedroom apartment, Liebers and a handful of college interns she employs have access to WiFi, electricity, a conference room and an individual office. Perhaps the biggest draw for such shared environments is the collaboration of ideas and solutions, sometimes with people of different companies and industries.

“It’s been very nice,” said Liebers, who looks to strengthen her company’s presence on the internet. Some of her fellow office residents include Beekman 1802, Buzz Media Solutions and Magic Digital Media. “I have enjoyed the camaraderie of a group of people who have a better understanding of doing business in the online world.”

That type of interaction has attracted larger corporations looking to not only capitalize on commonplace brainstorming but also to trim office space expenses, and coworking spaces are taking note.

Goronkin said he’s looking to expand the Urban Co-Works brand to other locations outside of Schenectady, and he’s not alone. Deskmag.com reported last year that two-thirds of coworking spaces aim to expand, with nearly 40 percent looking to open a new location entirely.

The industry perceives a growth in demand in the coming years. Intuitively, with the increasing demand for residential property within the nation’s metropolitan areas, more people seek to work, sleep and play downtown. Some of those working professionals would look towards a shared workspace.

There is, also, demand from larger corporations stepping in to utilize shared environments in a way not originally anticipated. WeWork, which has more than 130 shared environments, struck a deal with IBM last April that allowed the business computer giant to move approximately 600 employees to its 70,000 square-foot office space at 88 University Place in New York City. It’s a move industry pundits see as advantageous for big businesses, not only for cutting building maintenance costs but to free larger corporations from long-term leases, too.

“The more people that come in, it’s creating this interesting dynamic,” said Goronkin. “You have businesses who are here, who have their own culture. Then, it slams right into the culture of our space, and we get to help mold the cultures of those companies.”

It’s a potentially successful formula that has more than 80 percent of coworking spaces anticipating growth in the upcoming year according to Deskmag.com.

Goronkin said the trick for a successful coworking space is location. Companies are looking for the internal amenities, the networking potential and the proximity to restaurants, coffee shops, airports and train stations. In the end, it offers something for businesses big and small.

For start-ups and freelancers like Liebers, it takes her out of her house and into something clients expect to see.

“Now, to be able to say ‘come up to my office’ adds more legitimacy to the business I’m trying to do here.”

Couple arrested for violating orders of protection against each other