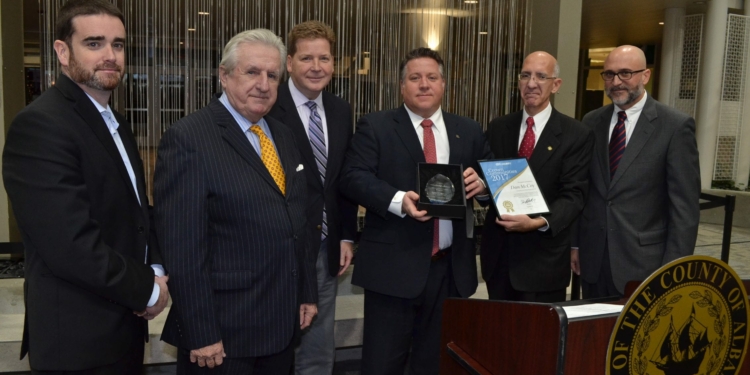 Award presenters cited the county’s Opioid Task Force and its Equity Agenda, an initiative created to enable county departments to better serve low-income and disenfranchised county residents. McCoy said the honor reflects on the quality of county government and how departments collaborate to address issues effectively.

“As always, we were inundated with highly qualified candidates this year; however, McCoy’s nomination stood head and shoulders above the others in his category,” said American City & County Editor Derek Prall. “His steadfast dedication to his community is clear, his qualifications are remarkable and his achievements are significant. American City & County is honored to present him with the 2017 County Leader of the Year Award.”

“I deeply appreciate this recognition,” said McCoy. “I firmly believe that it also shows the quality of the staff we have and how our departments work together to save lives, help people realize there is hope and provide needed services. With our Equity Agenda we are working together to make our government more efficient and useful for people in need.”

“Dan McCoy’s leadership is also recognized on the national level,” said Mike Griffin, executive director of County Executives of America (CEA), a national organization representing over 700 counties and city/ counties across the U.S. “Dan’s peers across the country see his leadership qualities and call on him more and more to lead them through this trying time for local governments.”

McCoy currently serves as co-chair of an opioid task force formed by CEA.

The Albany County Opioid Task Force, a collaboration between McCoy’s office and departments of Health and Mental Health, works to advance solutions to the opioid crisis locally. McCoy was also recognized for Project Orange, a partnership launched earlier this year between the county, the Albany College of Pharmacy and locally owned drug stores that provides a way for people to dispose of unused opioid prescriptions.

In addition, the McCoy administration issued an order in the county for a standing order for naloxone, an anti-overdose drug, allowing anyone to walk into a participating pharmacy and receive a kit. His office is also working to share programs implemented by the county and provide legal advice for localities to sue opiate manufacturers and distributors for aggressive marketing and/or violations of state drug laws.

Bethlehem’s Clarkson, Sasso and Wagoner took a moment at their final Town Board meeting to say goodbye, and thank you