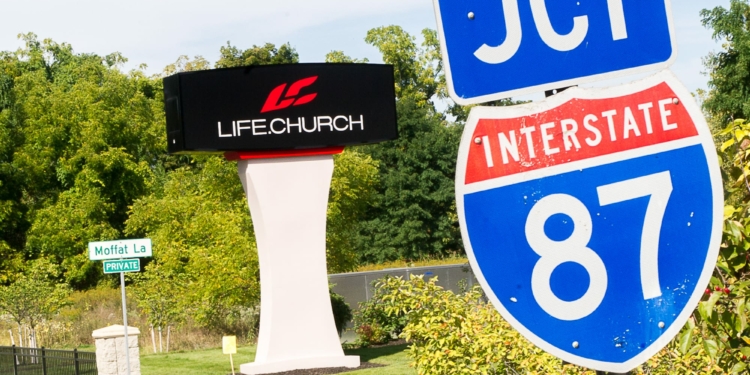 Town pulls back restrictions on when Life.Church can hold services (Photo by Jim Franco/SpotlightNews)

COLONIE — The Town Board, on Thursday, Sept. 21, unanimously agreed to lift the Open Area Development conditions that allowed Life.Church to build at 685 Watervliet-Shaker Road.

As part of the original, 2015 OAD, the church agreed to only have three services on Sunday morning and one on Wednesday evening. Faced with a lawsuit and a federal complaint, though, the Town Board lifted those restrictions and the church can now congregate whenever it wants.

Church officials would not return phone calls to say if they plan to schedule more services or events.

At issue, according to neighbors, is when there is a service the traffic can get so bad the line of vehicles often stretches from the church driveway, near the intersection with I-87, to Route 9.

Michael Maggiulli, the town attorney, said the proximity to Exit 5 on I-87 was a concern from the onset but all attempts to dissuade Life.Church from building on the site were unsuccessful. To mitigate traffic concerns, the town entered into an OAD agreement, which, in part, limited the number of formal gatherings the church can hold.

However, he said, the U.S. Department of Justice in a complaint filed against the town said the town was discriminating against a religious organization. And, shortly after the agreement was reached in 2015, Life.Church sued the town and that is still pending.

Couple those circumstances with three different traffic studies that found allowing more services will not add to traffic congestion, and a recommendation from the Planning Board, and the Town Board really had no choice but to modify the OAD, Maggiulli said.

“We didn’t think for a minute traffic would work there and we were surprised as anyone with the traffic study results,” Maggiulli said of Route 155, which is a state road. “Life.Church approached the town requesting an amendment to the OAD to remove the conditions, pointing out the town does not impose conditions on any other religious organization in town … no Catholic church, no synagogue and no mosque … they are free to conduct services when they deem fit and at their sole discretion.

“Based on that the town was exposed to some liability. The law tells us what we can and cannot do.”

The neighbors, though, are not convinced. Hector Vega, who lives across the street from Life.Church’s driveway, said he had not seen any traffic monitoring devices on Watervliet Shaker Road.

“There are times when we can’t get out of our own driveway because the traffic is so backed up. There are cars that try to continue down 155 as traffic backs up into the turning lane and they don’t slow down,” he said. “It can be hectic. Colonie police are there but they need some kind of assistance because it gets hairy when people come in and out of the post office too.”

Andrew Brick, an attorney for Life.Church who spoke at the meeting, said the follow up traffic study was done this spring and the findings reinforced three prior studies including one by the state Department of Transportation.

The land is zoned commercial office, and while there are traffic issues only when Life.Church holds services, if it were an office building it would be every day, twice a day and another form of commercial development might be even worse than that, said Colonie Police Lt. Kenneth Pero, the department’s traffic specialist.

“Afrim’s on Albany Shaker Road, from noon and 10 p.m., there are more than 100 cars in the lot so there are some 100 cars going in and out of there every hour,” Pero said of the athletic facility that explored the possibility of building on the land.

Police Chief John Teale, who was also at the meeting, said the church pays $85 an hour for Colonie officers to direct vehicles out of the parking lot and into traffic on Watervliet Shaker Road. Police do not direct traffic into the lot, he said.

Mark Mitchell, a candidate for Town Board who lives on Swayze Drive, said all he got in the mail was a notice saying there was a hearing to modify the OAD with no details at all.

“The notice did not direct me to a website or mention a traffic study or anything,” he said. “I’m concerned the process is not transparent enough, therefore I can’t formulate an opinion on whether this is a good idea or a bad idea.”

The church has not submitted any plans to the town for any structural additions.

Supervisor Paula Mahan said the only reason the town put restrictions on the church is because the church agreed to them, but now that they had a change of mind the town’s hands are tied.

“We have to work within the parameters we are given and we have to try to balance things out and do the best we can for everyone,” said Supervisor Paula Mahan. “In this particular case we have to abide by the law because if we don’t ,and we fail the burden is on the taxpayers. “

Town Board member Jennifer Whalen, an attorney, said while the U.S. Constitution certainly provides for religious freedom, it’s not an unconditional if it adversely impacts others.

“We might have to revisit this because if harm does come to residents, those rights are not absolute,” she said.