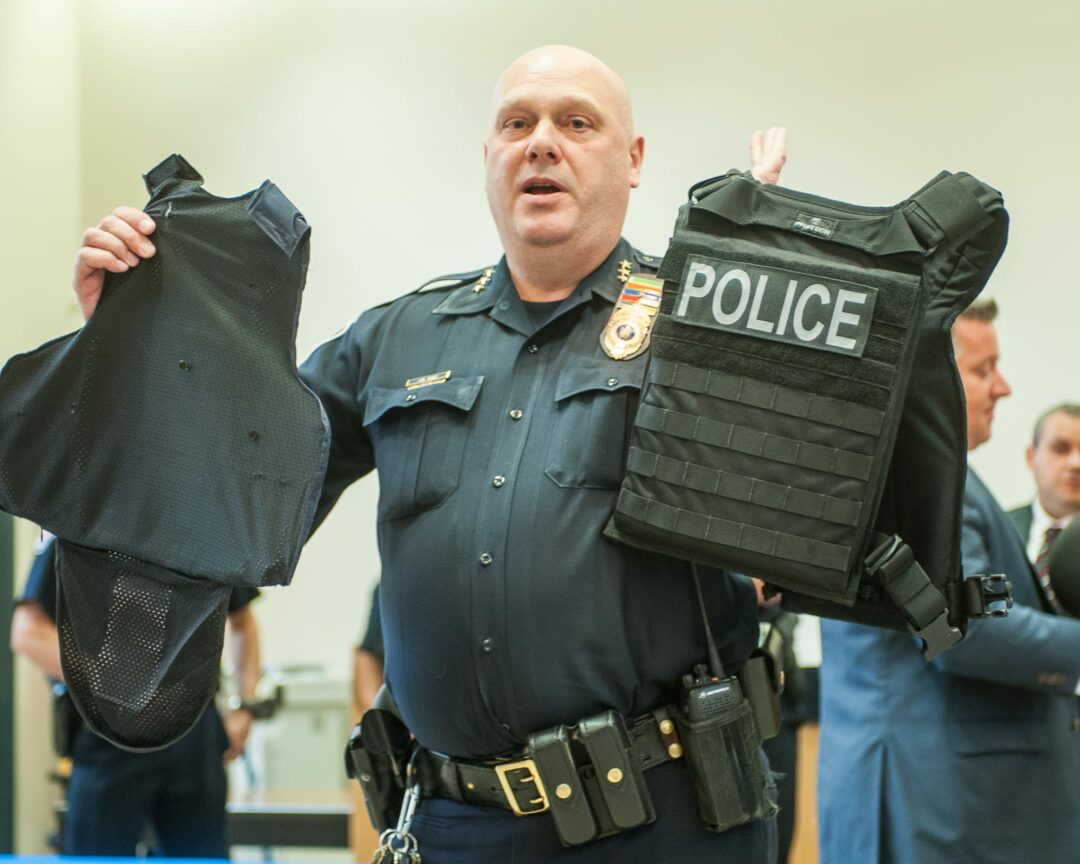 COLONIE – Law enforcement personnel in 10 departments throughout Albany County are now a little safer thanks to a $249,000 grant from the state Department of Criminal Justice Services.

The money was used to purchase Kevlar helmets and light-weight vests strong enough to stop a bullet fired from a rifle.

The vests, or rifle plate carriers, are designed to be quickly put on over the top of the soft body armor often worn under the officer’s shirt and worn for an entire shift. Those are designed to stop bullets fired from most hand guns.

“But, as you can see the standard bullet proof vest will not defeat rifle rounds. It is not designed to stop rifle rounds,” said Colonie Police Chief Jonathan Teale while displaying a vest with holes created by the penetration of rifle rounds. “The addition of these types of protective equipment in a police officer’s toolbox will help increase their chance of survival and for that I am grateful.”

The Kevlar helmets are designed to stop rounds from a handgun but not a rifle, he said during an Aug. 9 press conference at the Colonie Public Safety Building.

In Colonie, $62,000 was spent to purchase 72 pairs of vests and helmets that officers can quickly put on should the situation dictate. They are similar in strength to the large, SWAT-type vests but are smaller, weigh just 20 pounds and are much quicker to put on when needed.

“Something that keeps our law enforcement men and women safe is of the utmost priority but unfortunately, in today’s day and age, with budget constraints the way they are, for many departments they are considered a luxury,” said Sheriff Craig Apple, who received 48 pairs of vests and helmets for each of the department cars used for patrol and investigations.

In Bethlehem, Commander Adam Hornick said his department got 22 sets of protective gear with its $19,100 share of the DCJS grant.

“It will provide our members a superior level of added protection until the arrival of SWAT personnel in larger scale and more serious incidents,” he said. “This is equipment that we would not have been able to realize through regular

budgetary means, and it is a testament to the New York State DCJS, Albany County government and law enforcement agencies on their continued unwavering efforts to improve officer safety. No community is immune to these types of incidents.”

The grant application was put together through the office of Albany County Executive Dan McCoy, and recipients, in addition to those mentioned above, include departments in the City of Albany, Altamont, Coeymans, Guilderland, Green Island, Menands and Watervliet. The different departments got together and determined how best to spend the money and came up with the helmets and vests.

“We want the men and women in law enforcement to be safe while they are protecting us,” McCoy said. “And one way we do that is to have state-of-the-art equipment.”