GUILDERLAND — The Altamont Fair is staging a two-year celebration of its 125th anniversary when it opens the gates Tuesday, Aug. 15.

Though, technically speaking, this will be Altamont’s 124th annual fair, “the fair was started by a group of Albany men in 1892,” said Bev Filkins, chairperson of the Altamont Fair’s 125th Celebration Committee. “But, the actual fair did not start until 1893.”

In that time, the fair has gone by many different names, said Filkins. Which explains why the organization responsible for putting the fair together each year is officially known as the Albany, Schenectady, Greene County Agricultural & Historical Societies, Inc. (But, for everyone’s sake, it does business as The Altamont Fair.)

Organizers formed a committee last October to gather the fair’s history. Members reached out to the surrounding community, garnering memorabilia from local townspeople. The effort produced items from historians and collectors. The donated artifacts, some dating back to the 1800s,  were placed on display at libraries in Guilderland and Altamont earlier this year. A larger exhibit is planned for the fair next week.

“We will try to archive and preserve what we have,” said Filkins. Schenectady author and historian Don Rittner was hired by The Altamont Fair to write a book, which is expected to be out within the next year. Filkins said the initial effort to gather information developed into the desire to retain the history for future generations. “It may not follow the theme of the 125th celebration, but this is getting us excited to [archive] it.”

What is new at the Altamont Fair?

The fair is connected to 21st century technology. Organizers developed a mobile app available from both Google Play and iTunes to keep fair-goers abreast with the latest changes in entertainment. A Facebook page will also encourage people to share photos with the rest of the internet community. The entertainment, however, continues to be defined by that which can be found at the midway, and outside of it. 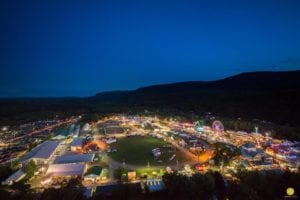 “New this year, we are having the “Nerger’s Tigers” featuring rare white tigers,” Amy Anderson, the fair manager, “We also have ‘World of Wonders’ staged in the tradition of old time sideshows, features a sword swallower, a fire eater and some very corny jokes. Michael DeSchalit, master hypnotist, will also perform with his show ‘Magically Speaking,’ a family-friendly, amazing magic show.”

Also new to the fair is a 7-act show from Circus Hollywood, and dog tricks by Dynamo Dogs.

What is returning to the Altamont Fair?

“We have expanded our Agriculture Awareness Trail and Hands-on Farming exhibit, designed to educate and entertain,” said Anderson. “The Baby Animal exhibit is returning to give our smaller patrons an opportunity to see the farm animals on their level.”

“Clayhaven Farms Belgians are returning to stay all week, pulling our antique fire steam engine and water wagon,” said Anderson. “The Giraffic Park petting zoo is a family favorite, with Twigs the Giraffe.”

Peter and the Master Keys will lead off the line up of live music, playing cool jazz on Wednesday. Skeeter Creek follows with a performance on Thursday night. Friday night showcases Bobby Stillwell with a few of his friends in a lively Party Rock performance, and Moonshine Junkies, perform Saturday night with a high-energy modern country set.

One-price admission includes unlimited rides, attractions, Circus Hollywood under the big top, and parking. Admission is $15 at the gate on Tuesday and Wednesday, and $17 at the gate Thursday through Sunday. Wednesday is Senior and Military Day – seniors 65 years and up along with members of the Armed Forces are free until 4 p.m. including rides. Save money by purchasing your tickets online for only $15, you can use the ticket any day of the fair on www.altamontfair.com.

“This is going to be a very, very tremendous fair this year, because of all the work we’ve done,” said Filkins.

SIDEBAR: How Safe are The Rides?

ALTAMONT — Concerns over the safety of amusement rides have peaked since last month’s fatal accident at the Ohio State Fair.

Now that the area’s largest fair is preparing to open, what is to be said about the safety of the rides planned for the Altamont Fair?

“It’s important for the public to know that the amusement devices we all enjoy are safe for use,” said State Labor Commissioner Roberta Reardon. “Credit is due to the hardworking inspectors in the field who carefully examine each and every ride to make sure they’re safe for use.”

The rides at each of our regional fairs are provided by amusement companies that travel the country. Amusements of America, which provided the rides at the Ohio State Fair, is among the largest and travels throughout the East Coast.

“Our hearts go out to everyone involved,” said Altamont Fair Treasurer Pat Canaday, speaking on the Ohio State Fair accident that killed one 18-year-old and injured several more.

A list of the events that have been inspected is available online at www.labor.ny.gov/ride-safety/.

Car dealership back on the drawing board in Colonie