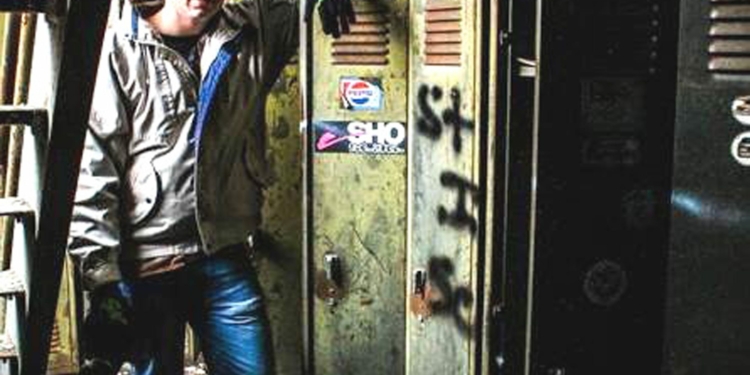 Take his assessment of urban blight as hyperbole, or not, but when factoring in the amount of abandoned property by square-footage within the City of Albany, Cavone is right. The Capital City has 1,054 properties registered as vacant properties according to its Vacant Building Report released by the Division of Buildings and Regulatory Compliance in January. Assume a conservative estimate of 700-square feet per property — the size of a modest apartment — and the figure well surpasses the nearly 100,000 people who call Albany home. And, not all of those properties are residential.

Cavone is an urban explorer. He dives into abandoned buildings with camera in hand. At first, he said, the setting provided for interesting photographs. Schools, churches, apartment buildings — all subjects to which people can relate, but Cavone shows how they fall to disrepair, scarred by graffiti and pockmarked by water damage. Buildings once held in reverence by those who once walked through its halls, were left to crumble.

The recent Plattsburgh State grad was introduced to urban exploring through the internet. As a class assignment, he paired up with friend and now fellow graduate Ramon Sanchez to film a documentary. Only, his professor, insisted the two find the “conflict” behind the situation. That’s when Cavone and Sanchez started looking at the issue beyond that of a canvas. It opened their eyes to the social problem.

On Saturday, July 29, the two filmographers will debut “Civil Corrosion: An Urban Doc” at the American Legion Post in Lake George at 6 p.m.

Experts such as Alan Mallach of the Center for Community Progress in Washington, D.C. say urban rot stems from socio-economics. One factor is that of the “White Flight” immediately after World War II, when predominately white families moved out of the cities and into the suburbs. The migration, and subsequent fall of downtown communities, was perpetuated by the development of giant shopping malls in the 1960s. Now store windows, like those on Albany’s Pearl Street, went empty as people shopped away from the city.

“Solving urban blight is dependent on data,” said Mallach, as a keynote

speaker for a panel of experts who gathered for a forum organized by the University at Albany’s Center for Technology in Government [CTG]. “If you don’t have good data — for example, about the properties, the owners, foreclosure status, etc. — you’re basically flying blind.

“Once you get in the cycle of urban blight, it gets that much harder to solve,” said Mallach.

Cities across the country are overwhelmed with expending resources to address abandoned properties. According to the CTG, an abandoned property can cost a city tens of thousands of dollars a year in direct and indirect costs. Direct costs include code enforcement, administration, engineering and property maintenance. Indirect costs include uncollected taxes on distressed properties, devaluation of adjacent properties and impact on city services such as police and fire calls. Beyond the eye sore it creates, abandoned buildings can attract drugs and violent crime, decreasing surrounding property values and encouraging more residents to move.

Today the CTG works with Schenectady, Troy, Amsterdam and Gloversville and the University of Albany’s Center for Technology through a program that allows code enforcement-related data to be shared between municipalities in a joint effort to take proactive steps against urban blight. The program, funded by a $558,000 grant from the New York Department of State, launched in 2015.

“This pilot project is an investment in an early warning system to help our municipalities intervene in distressed properties before they fall into a cycle a blight,“ said New York Secretary of State Cesar A. Perales. “A regional approach is critical and these cities from the Capital Region and Mohawk Valley, with the leadership of the City of Schenectady, have committed to working together to identify strategies to combat urban blight in a truly groundbreaking effort.”

Individually, the Albany County Land Bank launched an aggressive effort to obtain vacant properties — urban, suburban and rural — with the intent of turning them around to potential homeowners. In May, its “Spend a Little, Get a Lot,” program turned 40 vacant lots into investment properties, selling them for $100 each.

Over the past three years, the Albany County Land Bank has acquired more than 630 tax-foreclosed, vacant and abandoned properties, made more than 200 property improvements including cleaning up vacant lots, abating and stabilizing structures, demolishing blighted buildings and completing full rehabilitations. The Land Bank has invested more than $2.5 million into improving properties and incentivized an additional $4 million of private investment. The Land Bank has enabled the return of more 150 vacant and abandoned properties through pending and closed sales which it claims will allow millions of dollars of assessed value to return to Albany County’s tax rolls.

“Big business could be brought back to Albany,” said Cavone. “These spaces were occupied for the right reasons. Things like the Albany Land Bank are doing a lot to turn this around, and it’s only just started. Overtime, Albany could see big change.

“We hope to shed a light on a fact these abandoned spaces could be utilized to build up cities again,” said Cavone.