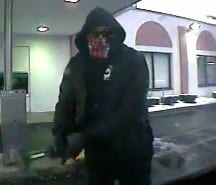 COLONIE – Police are asking the public’s help in identifying a man who twice tried to break into an ATM machine, once with a sledgehammer.

Police received the first alarm from the ATM at the Citizens Bank on 265 Osborne Road on New Year’s Day at 4:59 a.m. Responding officers found the ATM had been damaged but still intact. They also found the passenger side view mirror from a grey Nissan Maxima from 2013 to 2015. It’s unclear if it is related to the bank.

At 7:28 a.m., security officers were viewing the ATM’s camera by a remote feed and saw the same man again try to break into the machine, this time with a sledgehammer. Nothing was taken, but the machine was damaged.

Police K9 units checked the area but were unable to locate the suspect.

The suspect’s face is concealed but there is an unidentified logo on the jacket police hope someone can recognize.

Anyone with information is urged to call Colonie police at 783-2744.