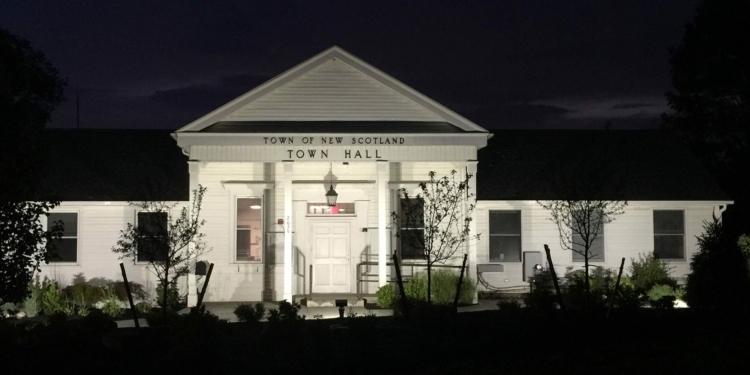 While they may belong to different parties, the two candidates competing for an open seat on the New Scotland Town Board have more than a little in common with each other.

Both candidates are women, lifelong residents of New Scotland and graduates of Voorheesville High School. Each also helps to run her family’s farm business, is a relative political neophyte and identifies maintaining New Scotland’s rural character as a major priority.

Where the candidates differ most dramatically is in their views on the town’s hospitality to small businesses, the pace and direction of development and the recently approved town budget.

The incumbent, Democrat Laura Ten Eyck, was appointed to the Town Board earlier this year, after Town Board member Doug LaGrange was elected town supervisor. Ten Eyck, who had served for a year on the town’s Planning Board, to which she was also appointed, said that she was approached by the Town Board to fill the vacated seat. She accepted and the selection was unanimously approved. The 53-year-old owner and manager at Indian Ladder Farms has worked for the American Farmland Trust for almost a decade and, prior to that, worked as a reporter for the Altamont Enterprise. Those experiences, she said, have taught her a lot about local government.

As a reporter, “I covered the hill towns,” explained Ten Eyck, who graduated from Emerson College with a degree in creative writing. “And that was really my first introduction to all the town boards and different committees and the way local government works. There’s a lot to learn there, it’s astonishingly complicated no matter how small the town.”

Ten Eyck, who, in her position at American Farmland Trust, has worked as a consultant to help local municipalities develop farmland and agricultural protection plans, said that her major priority as a town board member is to ensure that the town employs smart growth principles. “We have a lot of residential developments going in right now that have been in the works for a very long time,” she said. “I feel that we need to be careful to preserve our agricultural lands and I am an advocate of smart growth principles, things like keeping development in-filled into designated areas rather than sprawling across the landscape.”

Ten Eyck said that she would like to see more planned developments like the proposed New Scotland Hamlet in the northeastern part of town that would create a mixed-use commercial and residential area, accessible on foot or bike, that would accommodate businesses within the town without marring much of the rural landscape.

Ten Eyck’s Republican challenger, Ally Moreau, graduated from Voorheesville just two years ago. The 20-year-old marketing major has been campaigning door to door, while also taking seven classes at Hudson Valley Community College and working for her family’s farm business, Our Family Harvest. She said that she wants to bring balance to a board that currently has no Republican representation and work to make it easier for small businesses to succeed in the town.

“I grew up in a family of landowners and business owners,” said Moreau. “And so I know how hard it can be in the town to prosper with your land and really flourish with your business. There are restrictions in town that don’t make it easy or inviting to do so.”

Having recently joined the Republican committee, she said that when she heard that they were looking for a candidate to run, she thought it would be a good opportunity “to get a foot in the door.” Moreau, who intends to minor in political science when she attends a four-year school next year (her first choice is Siena), said that she would like to see more political involvement from her generation and she hopes her campaign will provide a good example to others her age. “They’re moving out,” she said of the town’s younger residents, “because there’s nothing to do here and it’s getting more expensive to live here.”

“There are not many businesses in our town,” she said, mentioning that she heard a rumor that Smith’s Tavern in Voorheesville, which Stewart’s Shops had expressed interest in purchasing last spring, might be closing its doors soon. “We have plenty of gas stations,” she said, “but not many small businesses.” Moreau blamed town zoning laws for being inhospitable to smaller businesses by making the approval process expensive and unwieldy, saying that it’s unreasonable to have identical requirements for smaller mom-and-pop businesses and larger chain stores.

She also said that she feels that decisions are often made unfairly and, declining to “name names,” said that she believes that some developers are given preferential treatment by town board members. “I don’t think there’s an equal voice for the people on the board right now,” she said. “So that would be a big thing for me. I would love to see more small businesses and it’s hard with the people that are on the board right now.”

Ten Eyck said that she thinks the town provides a good environment for small businesses to succeed. “There have been challenges for small businesses,” she said. “But, even though we are concerned about the increasing residential development, I do believe it will help support small businesses in the town, particularly if we can design our commercial areas so that they are walkable and shop-able and live-able, that there’s a lot of potential for growth.” She also pointed to upgrades at Thacher Park and the new rail trail as developments likely to bring more day visitors into New Scotland to patronize local businesses.

Regarding the pace of residential development, Moreau said, “I don’t believe that things are necessarily being done rationally. We’re bringing lots of development into the town, but I don’t think some things are really being taken into consideration, such as the traffic that it will bring. We’re going to need to widen roads and pay for the added wear and tear; we’re going to need more businesses in to provide for the more people we’re bringing in.”

About town finances, Ten Eyck said that she thinks that the town is handling its resources responsibly. “I think that the town is being fiscally very conservative for our budget for 2017 and I think we’re in good shape there.”

“I think the budget really needs to be re-looked at,” disagreed Moreau. “It could be revamped to make sure that everything is being used to its fullest efficiency. I think there are some places where that’s not happening.”

Both candidates stressed that maintaining New Scotland’s rural character is an important priority and said that it will be important to thoughtfully plan development going forward. Ten Eyck noted that the board is seeking funding to complete a review and update of the town’s comprehensive plan, which appears to have not been done since the mid-90s.

“I love the rural aspect of the town. I’d love to keep that,” said Moreau. “If you look at other towns, like Altamont or Middleburgh, they have flourishing businesses and have been able to keep that feel of the town. If you drive down Main Street in Altamont, it’s like going back in time and that’s really nice.

“I see a lot of potential for the town,” Moreau said. “And I’d really like to see it live up to that potential.”

“I care a lot about maintaining our rural character,” said Ten Eyck, “and developing community in a way that keeps to the principles of smart growth and results in an environment that supports small business and is walkable, bike-able and live-able.”

SPOTTED: Troy’s fast start too much for Shaker to overcome in Class AA Super Bowl