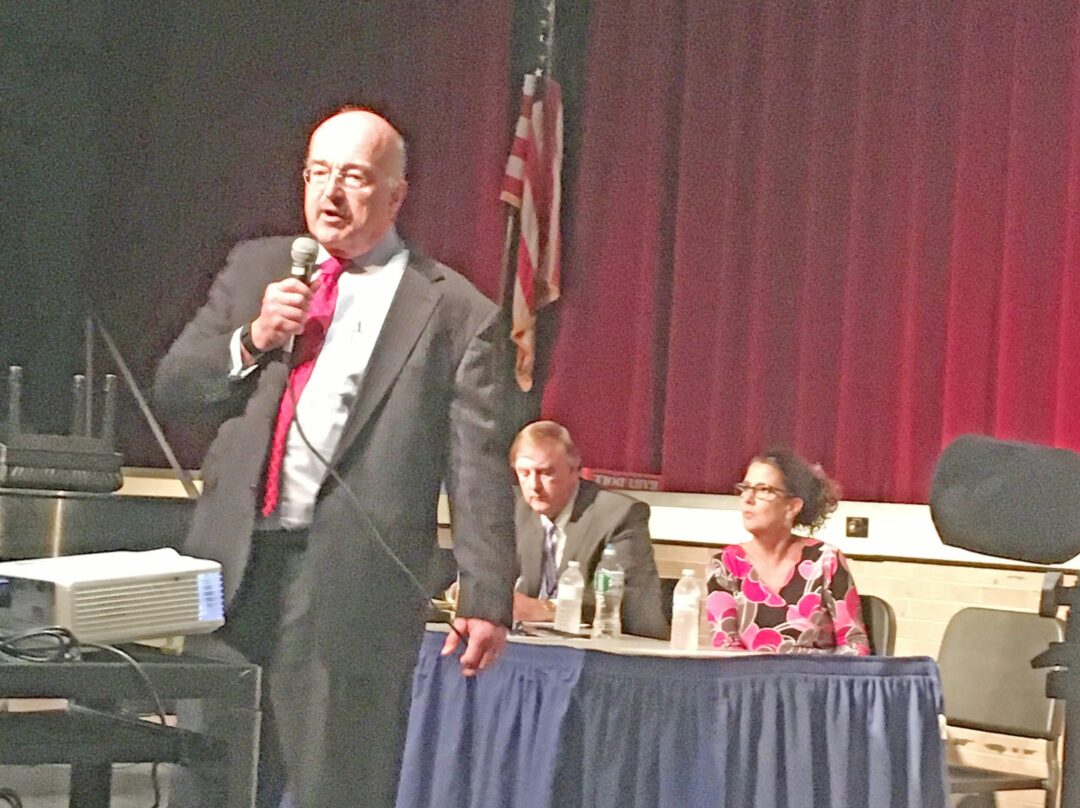 LATHAM — North Colonie Central School District officials recently presented their plans for a long-term multimillion-dollar expansion effort in order to inform residents about the proposal before it goes to a vote in December.

On Thursday, Oct. 13, Superintendent Joseph Corr and Assistant Superintendent Kathleen Skeals, along with multiple other speakers involved with the project design and construction provided details about how much the project would cost, and what the district’s schools would look like after completion.

Right now, the district is under a time crunch. North Colonie currently receives state building aid at 69 percent as a result of the Maplewood School merger, which was added into the North Colonie school district in 2008. However, in order to access that aid, the district must have a general construction contract for the project signed no later than June 30, 2018, unless the state Department of Education grants the district an extension. If that deadline is not met, said Corr at the presentation, the state aid would drop to 52 percent and the community would have to shoulder 48 percent of the cost, as opposed to the original 31 percent. Corr stressed the importance of being able to get the state aid, describing it as an “urgent issue.”

The project will be completed by phases, with the first two phases set to stretch from 2018 to 2022. The total projected cost for the entire effort is $196.4 million. North Colonie is estimating that a vote on the next phases of the project will be held some point in September of 2021. That work is expected to stretch from 2023 to 2026, and will include additional work in most of the school buildings. On Dec. 15, the public will be able to vote on the first two phases of the project.

The school district’s enrollment is projected to grow by approximately 939 students over the next decade, according to the presentation. The influx of new students not only requires that the district revamp its now dated infrastructure to accommodate the increase, but also means the it has to take huge steps to keep up with the increasingly digital, collaborative classroom environment of the 21st century. For context, most recently, an addition to Shaker Junior High School was completed in 2002. The latest major addition to the high school was finished in 1970.

One of the most significant aspects of the project is the integration of sixth grade into the junior high school. Corr told SpotlightNews in August that after multiple meetings with the community and all levels of faculty, the district decided to totally integrate sixth grade into the junior high school, as opposed to putting that grade in its own wing in a building. Currently, Shaker Junior High School is divided into a hall concept, with four halls. With the integration, the school will move to a five-hall layout, requiring the construction of a new hall.

The presentation described many features the project will add to each of the schools, including secured single points of entry into the schools, and “flexible” areas. The point of having such areas, Skeals said during the presentation, was to familiarize students early with the independence that comes with entering college or the workforce. Science labs will also be updated, along with media centers, performance spaces, and athletic facilities.

The first phase of the project, which is projected to last from 2018 to 2020, will specifically add the enhanced security measures to the front entrance of Shaker Junior High along with additional measures for the entrances of the elementary and high schools, renovate the auditorium, create a new hall, and create a library media center along with more science, technology, music, and art classrooms. There will also be additional parking for buses, and reconstruction of various athletic fields at the high school, which will include the addition of synthetic surfaces. Phase two of the project, which is projected to take place from 2020 to 2022, will include construction of a fitness center in the high school, and adaptive physical education space, and more classroom improvements.

The complete presentation, along with details regarding how each building will be affected, can be found at www.northcolonie.org.

HEALTH and FITNESS: The need for self defense