From NYC to Albany: Aurora follows TV appearance with gig at The Hollow 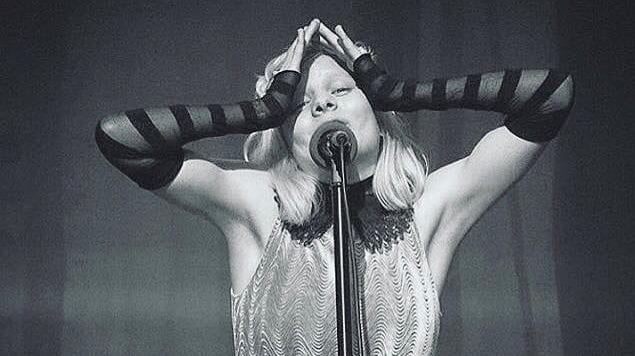 ALBANY — On Tuesday, July 26 Norwegian singer/songwriter Aurora, performed her latest single “I Went Too Far” on The Late Show with Stephen Colbert.

On Thursday, July 28 Aurora performed her latest single “I Went Too Far,” as well as 12 others, at The Hollow Bar + Kitchen in Albany.

These are the kind of shows that have earned Albany its No. 6 in a recently announced study. Seeing this kind of talent in such a great space with amazing sound is a luxury. Even Aurora herself called out appreciation for the room, although her bad English translation delivered it as she liked the “dirty” room which got the best laugh of the night.

Right from the start “Black Water Lilies” showcased Aurora’s incredible range and her pure vocal lines. The part that’s difficult to describe here in print is her stage presence with the dramatic use of her hands, arms and those crazy eyes. Flailing arms, crazy eyes and the jazziest hands ever, all backing this angelic voice and synth-pop soundscapes?

Aurora Aksnes is a 20-year-old singer from Norway whose career got a boost when she covered the Oasis song “Half the World Away” for a British department store commercial. The commercial has over 24 million views on YouTube and certainly is a beautiful version of the song.

I find it hard to not make some comparisons to the likes of Bjork and her quirkiness or maybe Lorde for her intensity and sometime Sia or maybe she just looks like Sia’s young dancer Maddie Ziegler. Any way you look at it, there’s a ton of talent, sincerity and integrity in the music that she’s making and performing.

The set at The Hollow on this night seemed to get stronger with each song. “Warrior.” which was spot on, as was “Murder Song,” were my personal favorites. But, the crowd seemed to like the final three, “I Went Too Far,” “Running with the Wolves” and Aurora’s biggest single to date, “Conqueror” — which just tore it up. A great shift of gears to finish the night with the audience dancing and screaming for more, but that was it for this night. There was nothing that could have appropriately followed that closer any way.

The Titanics opened the night with a great 35 minute set, showcasing some great new material as well as a great cover of Steve Miller’s “Fly Like an Eagle” that suited them perfectly. Always a solid performance from these guys!