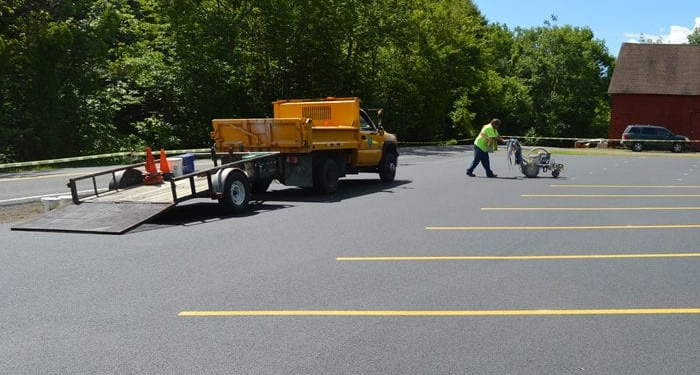 Projects such as the paving and striping of the new parking lot at Lawson’s Lake Park are similar to the types of activities youth offenders in the Project Growth program will participate in to pay back restitution while learning a trade. Photo provided

ALBANY COUNTY — Earlier this month, Albany County Executive Dan McCoy announced the development of the youth program, Project Growth, a juvenile justice program that provides internship opportunities to youth who are required to pay restitution for their crimes.

Launched in 2013 as the first program of its kind in New York state, Project Growth originally partnered with institutions such as Siena College and the Capital City Rescue Mission to provide teens with jobs in order to give them the ability to pay back court-ordered restitution. In its new iteration, the program has partnered with various trade unions with whom the teens, typically between the ages of 13 and 17, will have the chance to work and learn different trade skills—skills that they can then use to transition into the workforce. The program also involves a classroom component, which teaches youth transferrable life skills such as financial literacy, self-care and career and education planning.

“The International Union of Painters and Allied Trades is happy to partner with Albany County and County Executive McCoy in his effort to help kids get an introduction to painting, bricklaying and carpentry,” said Jeffrey Stark, Business Representative, District Council No. 9. “These kids are at a turning point in their lives and giving them an opportunity like Project Growth shows them they can learn a skill that may change their lives, change their outlook and make a difference.

“This evolution of the program involves kids not getting a job but getting an introduction to various trades, earning money and having the ability to pay their restitution,” said McCoy. “This program can really help our kids get back on track and deter them from re-offense. It will help them learn from their mistakes and guide them in the right direction.

The new internship program started this week at Lawson Lake and there are currently six participants enrolled, according to county officials. “Lawson Lake is a county park,” said Brad Maione, Albany County’s public information specialist, “and there are some facilities there where we’re doing some improvements, so they’ll be working hand-in-hand with the trade union guys—doing some painting and maintenance work and fixing up some of the structures.” Participants in the past have successfully completed the program and repaid their restitution, he said. “This year, we’re kind of starting out fresh and learning from the previous experience.

There are hundreds of eligible participants, he said, but that there are a number of things to consider before they’re accepted into the program. “They have to have a financial obligation and be supervised by the department and so we look at each case individually and don’t want to make it too big for its own good. Starting out with six is a good start and then we can judge the efficiency and the effectiveness—and then we’ll see what we think can work for the next class we put together.”