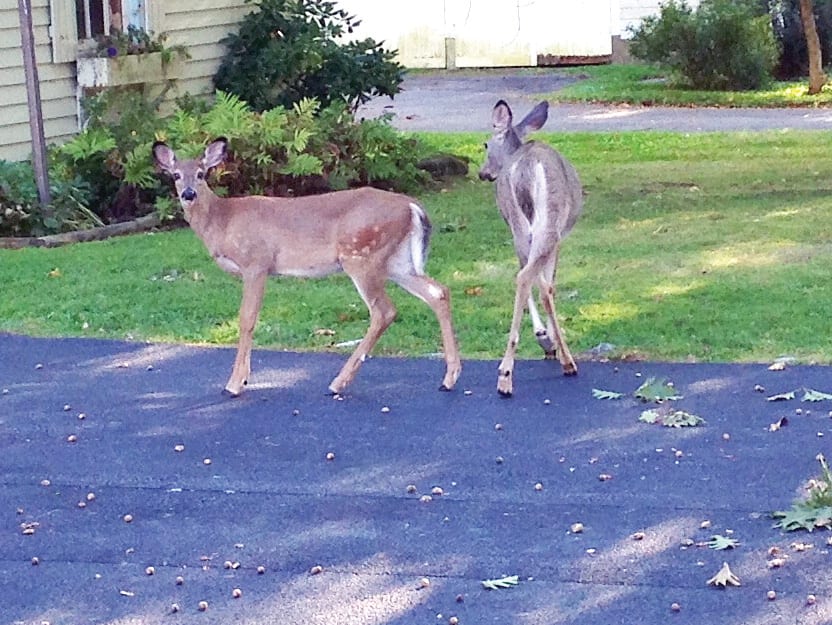 The town’s Deer and Tick Borne Disease Committee is recommending a new program be put in place to help manage the deer population.

The Committee gave a presentation to the Town Board on Wednesday, March 25, to recap a year of meetings on the subject. Supervisor John Clarkson had recommended a citizen’s advisory committee on the topics of deer and ticks be convened last year after the town received numerous complaints.

Councilwoman Julie Sasso is chairwoman of the committee.

“At that point, it was more of a sense that we had as a board that we had started to hear residents concerns about the two disparate populations,” said Sasso. “But we didn’t know what the extent of the concerns or the options that were appropriate for a town board or town government to undertake to address the concerns.”

Residents were not only worried about Lyme disease, but the number of traffic accidents that have been caused in town by deer. Others have been concerned that the larger numbers of deer are disturbing their gardens. The committee was filled shortly after Clarkson mentioned its creation in his State of the Town address last January.

Throughout the year, those on the committee heard presentations from experts about the area’s deer and the pests they carry, from state Department of Conservation Wildlife Biologist Karl Parker to Matt Frye of the state Integrated Pest Management Program. Meetings were held once a month throughout the last year.

Last September, committee members asked residents to participate in an online survey to “to assess community experience with deer and tick populations.” Most felt the deer population was more of an issue in more central parts of the town, like Delmar and Slingerlands, rather than those who lived in more rural areas like Glenmont and Selkirk.

The results of the survey were shared for the first time with the public at last week’s meeting.

A total of 1,740 residents responded to the survey. Most found the deer to be a nuisance, with 73 percent of survey takers claiming to have landscape or garden damage. Even more felt the methods they used at home to deter the deer, such as soap or specific plants, were not working.

Of greater concern was the increased amount in car accidents in recent years caused by deer. About 66 percent of those who took the survey said they have seen deer by town roads once or twice a week, while 23 percent said someone in their immediate family had been in a car accident involving a deer.

As for ticks, 81 percent of respondents said they had found a tick on themselves or immediate family member. Another 86 percent said they knew someone who has had a tick-borne disease.

Committee member Ed Tesiny said many of those who chose to leave comments following the survey shared anecdotes about family members who had contracted a tick-borne disease.

“Some of the comments were really poignant,” said Tesiny. “Some of the people whose family members contracted Lyme disease, it was really devastating. It was heartbreaking to read some of their comments.”

The goals of the new program would be to raise public awareness, along with implementing low-cost and low-controversial interventions of the deer population.

Public education includes discouraging public feeding of deer, and working with residents to landscape lawns in ways that would no longer attract deer. Thoughts to reduce car accidents included adding flashing message boards to notify drivers of “hot spots,” more signage along the road or deer whistles on cars.

Other possible suggestions to reduce the deer population include longer hunting seasons, an increase in hunting permits, allow hunting on currently prohibited land, or allow hunting near the Hudson River. The committee also suggested the program could work to connect hunters with those landowners who want to reduce the deer population near their property.

The committee did not recommend surgical sterilization, town-sponsored culling, a catch-and-release program, euthanizing deer, DEC approval of bait stations or the increased use of pesticides on town-owned lands.

Committee member Linda Jasinski said another solution could be the increased allowance of chickens in residential areas to keep the ticks at bay. Currently, chickens are only allowed in agricultural areas unless granted a variance from the town’s zoning board.

Ultimately, the committee recommended the town start its own program to deal with the population problem. The current advisory committee would stay in place, with the inclusion of additional town staff, school district staff, community organizations and residents. The working name is the Bethlehem Management Program for Deer and Ticks, but another name could be selected in the future.