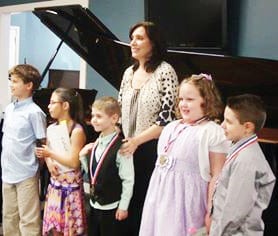 In celebration of Puzzles Bakery and Café opening, Piano for Special Kidz Music Studio will return to Schenectady for a performance of contemporary and classical favorites.

Last year, Piano for Special Kidz performed at Proctor’s to raise about $1,500 in funds for Puzzles Bakery. In a weekend-long grand-opening celebration, the Latham-based piano studio will bring its students to Puzzles for a performance Saturday, April 4, around noon.

While Puzzles, has been open since mid-March, its grand opening will officially be held on National Autism Day, Thursday, April 2. It will host events throughout the weekend, like a gallery opening and time with therapy dogs after the ribbon cutting at 11 a.m.

Dee Cucinotta, owner of Piano for Special Kidz and Piano for Guys and Gals, offered to perform for Puzzles last year after the bakery suffered setbacks in its originally planned opening in 2014. A group of people broke into the half-renovated State Street building and stole tools, which belonged to bakery owner Sara Mae Hickey’s father. Then, a county snowplow broke through the back wall of the building when attempting to clear away ice.

“The fundraiser came about because they had had a pretty hard time there,” said Cucinotta. “Considering what (Hickey’s) goal was in helping people with disabilities get jobs, I thought it would be a great idea to do this for them.”

Cucinotta’s studio has been open since 2003 to address “the need for qualified special education music teachers to instruct students with disabilities that were interested in playing the piano,” she said. With degrees in music and special education, she had parents who explained they were looking for music teachers that could work with children who had disabilities, who often have difficulty learning with conventional teachers.

Primarily, Cucinotta concentrates on children, but she also has a program to teach adults. The studio takes students with Down syndrome, ADD and ADHD, forms of Autism, and traumatic brain juries. The instruction is uniquely tailored to the diagnosis and evaluation of each student.

“Unlike conventional teachers, my learning programs are based on a combination of piano pedagogy, current knowledge about how the disability affects learning to the play the piano, and the latest teaching strategies for children with special needs. This way, students learn with less frustration, more independence, and have more self-confidence and motivation,” said Cucinotta.

Recitals are held for each age group, so students can learn performance repertoire, performing for various audiences and the general etiquette of playing for an audience.

“A lot of times, and even with students without disabilities, they play piano at home. One of the things the students don’t know is that they have something to give to others,” said Cucinotta.

She said that students choose what kind of music they want to play. For Puzzles, she said that songs from “Annie,” “Frozen” and “Harry Potter,” and music by Billy Joel, as well as several standards like “Moon River,” are on the itinerary.

“They’re just wildly talented,” said Hickey. Similarly, Puzzles employs adults with disabilities who usually do not have the opportunity to work a service job.

“We just really want to put a positive spin on special needs,” Hickey said. “The dialogue surrounding Autism, I often feel like we concentrate on children. Those children become adults…. There’s just so many young adults with special needs who just aren’t given an opportunity.”

Since its soft opening in mid-March, Hickey said that the bakery and café has served hundreds of customers already. She said after months of setback, she was excited to finally celebrate her bakery’s opening, especially after receiving positive feedback from customers and employees.

Reaching out to younger voters