A fresh look at Alzheimer’s research 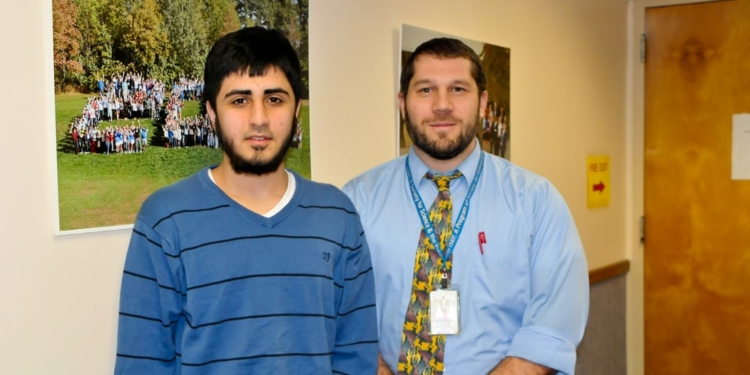 Like other 17-year-old high school seniors, Muhammad Ali is contemplating internships and college plans. But what sets Ali apart from his fellow students is his groundbreaking research in Alzheimer’s disease.

The Shaker High School senior studied a natural protein known to cause Alzheimer’s and looked into manipulating the protein to inhibit the disease. He also developed a way to fabricate the protein synthetically in a more cost effective and efficient way than currently used, helping researchers and drug companies study the protein. For his research, Ali was one of only 300 students worldwide to win an Intel Science Talent Research competition award.

“Initially, it all started with a course I took in 10th grade,” said Ali. “It’s called Science Research.” The course is administered dually with the University of Albany and Shaker High School.

At first, Ali said he wanted to research HIV and how to prevent it, but since the disease is so infectious, he, at around 15 years old, wasn’t allowed. Instead, he turned to Alzheimer’s disease.

“So then I was like, what are other things affecting Americans today? A lot more imperative to stop in the next decade, especially with the baby boomers coming up, is Alzheimer’s disease. And that’s how I really got interested in that,” said Ali. “Alzheimer’s disease is the only leading cause of death in the U. S. in the last 10 years that’s actually seen an increase in the numbers of cases, even with all these efforts, with all these drugs that are out there.”

He said that most professional articles he read on the disease were bad news, but then he found one that spoke about a natural inhibitor of Alzheimer’s — a mutation of the amyloid beta 40 protein.

“I was trying to understand why this natural inhibitor of Alzheimer’s disease is working as it is and just try to provide drug companies with the information that they need. Basically, if the drug companies know that by making a certain part of the protein more rigid…you can essentially prevent Alzheimer’s disease. That’s really important for pharmaceuticals trying to develop drugs,” said Ali.

By no means is Ali’s research a cure for Alzheimer’s disease, but it is a step towards further research in the cure. Ali said he wanted to help pharmaceutical companies in finding a preventative measure for Alzheimer’s that attacks the disease at its core.

The next step in his research was figuring out a way for pharmaceutical companies and scientists to be able to study amyloid beta in the lab. As it is, the protein usually costs around $900 for one milligram, which is why most labs buy cheap imitations online.

Nathaniel Covert, a Shaker High School science teacher and Ali’s adviser, said that since a lot of proteins are so expensive to buy, labs essentially use “egg whites.” “Although it still clumps, it’s not the same as what a human protein would do,” he said.

With this protocol of fabricating amyloid beta, labs would spend only about $80 per milligram. Already, some companies are using this new protocol, and many more are expected to in the future.

Ali studied how to fabricate the protein for nearly two years under the mentorship of Dr. Chunyu Wang at the Rensselaer Polytechnic Institute in Troy and group of graduate students. He also found mentorship from UAlbany professor Dr. Igor Lednev.

As for Ali’s future, he said he hopes to become a physician scientist, where he would act as something of a liaison between research scientists and the public to ensure that people are being heard.

Like any other high school senior, Ali is looking for internships.

Along with several other awards, Ali won an Intel Science Talent Research competition award, which looks at scientific research and potential scientific leaders ship. The award earned him and Shaker High School $1,000. Ali said that, while $1,000 is not much in scientific research, he is excited to be able to list these awards on his resume to open up more opportunities to him.