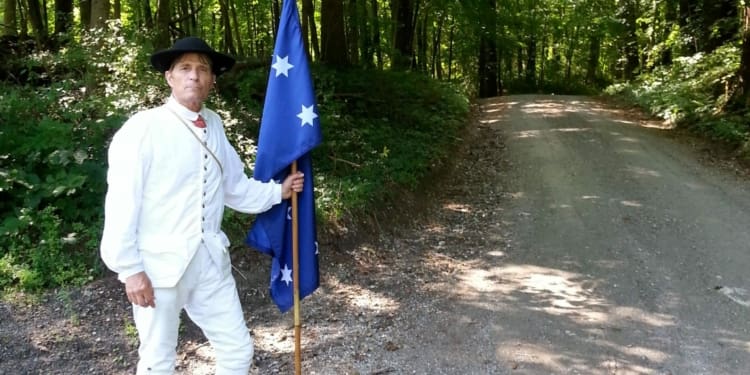 Dave Fagerberg is on a mission, and he’s not going to stop walking until he completes his goal.

The 64-year-old Kansas City native has been walking the Col. Henry Knox Trail, a 300-mile route from Fort Ticonderoga, to Boston, Mass., since early July, decked out in a complete head-to-toe Revolutionary War soldier’s uniform.

“The whole purpose of it is to bring attention to the trail, (to) promote the fact that Knox did a wonderfully hard thing,” Fagerberg said.

Fagerberg has dedicated his summer and early fall to following the same trail that Knox took in 1775-76. He hauled 59 cannons from Fort Ticonderoga to Gen. George Washington in Boston. While some signs and plaques stand along the route, Fagerberg would like to see the entire path be designated a national historic trail.

Knox dragged 60 tons of equipment and traveled through a harsh winter, but lost only one cannon. His hike to Washington eventually led to the evacuation of the British troops.

“What he was able to do to haul all those cannons 300 miles miraculous,” Fagerberg said. “Even to this day, Boston people celebrate Evacuation Day. It was a big morale booster for early in the war.”

As a reenactor and history buff for more than 20 years, Fagerberg believes the route must be preserved. In 2006, Fagerberg conducted a similar feat with a small group of other reenactors on the 700-mile Rochambeau Revolutionary Trail from Providence, R.I., to York, Va. That route eventually became a national historic trail.

Fagerberg has decided to walk this journey on his own, though his girlfriend, Judi, follows nearby in a car. Each day, he walks anywhere from 10 to 16 miles, with Judi providing food and drinks in the car, and then the two find the nearest motel to recuperate.

Fagerberg had walked about 140 miles as of press time.

“Every day is a new adventure,” Fagerberg said.

Since he’s wearing a full uniform, many people have stopped him along who are either already aware of the Knox Trail or just wondering what he’s doing. Most of the trail is on concrete, so Fagerberg can often be seen walking on major roads.

“You see everything. It was very pretty coming down Lake George, various views of mountains, the lake. You almost feel like you’re back in the 18th century,” Fagerberg said. “Then there’s other times, when I was walking on Route 9, people whizzing by at 50 miles per hour. I’m just trying to stay safe on the side of the road.”

In mid-August, Fagerberg made his way through Colonie, where there are two Knox Trail markers, one at the Troy Landscaping Co. on Route 9 and the second on the side of the Masonic Lodge building on Old Loudon Road.

While Fagerberg said he’ll stop every three miles to sit down and relax his legs, one of his main priorities is taking care of his feet.

“If you get blisters, you get miserable. I’ve just had so much experience doing it in the past years, I know where I can get blisters, so I take care with preventative maintenance,” Fagerberg said.

Fagerberg tries to be prepared for other natural conditions, too. With the summer’s heavy downpours, Fagerberg said he has an oil cloth shirt, which is “correct 18th century style” clothing, which he uses to cover up with if it gets too wet. If it starts to thunder and lightning, he usually heads to the car until it stops.

“The heat and humidity can be really miserable at times. Coming down from Lake George, it was really hot and raining. I had to go up and over a mountain,” Fagerberg said, adding that he has three different outfits that he can wash and rotate in order to stay clean. “I did fewer miles because I didn’t feel good, but I wasn’t going to stop. It’s almost a job. I owe it to what I’m trying to do to get out there and put in the miles.”

Local officials and historians in neighboring towns are waiting on Fagerberg’s arrival to talk about his journey, so he can’t just stop moving. However, since the adventure can be costly – gas, motels and even time add up – Fagerberg has stopped to take some breaks, and will take a three-week break to head home to Kansas this week before finishing up the trail in September.

“It’s challenging … but the key is to see people step it up who are passionate about the trail and do something,” Fagerberg said.

Fagerberg said if the trail is designated a national historic site, it would boost tourism in those historic areas.

“There are a lot of advantages, but nobody’s really done anything with it, even when it’s right in front of them,” Fagerberg said.

For more information on the trail and monuments, visit www.nysm.nysed.gov/services/KnoxTrail/.

Out of school leads to out of doors